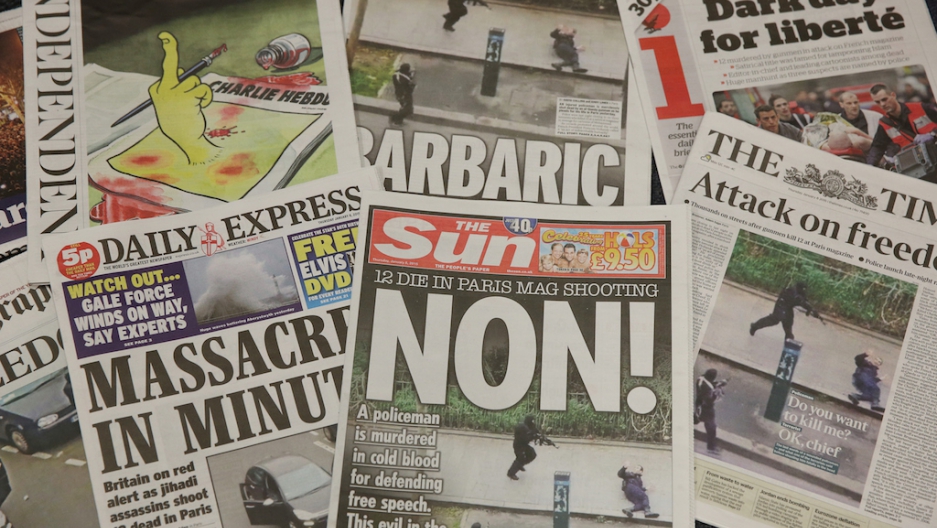 British newspapers the day after the killing of journalists and police in an attack on Charlie Hebdo satirical newspaper in Paris.
Credit: Peter Macdiarmid
Share

LONDON, UK — To publish, or not to publish?

It’s a dilemma news editors around the world have grappled with since the killing Wednesday of 12 journalists and police officers at the Paris office of the satirical French newspaper Charlie Hebdo.

The images in question are the paper’s cartoons mocking Islamic fundamentalists, some of which depict the Prophet Muhammad.

While headlines screamed unequivocal condemnation of the attacks, some newspapers distanced themselves from the cartoons themselves. Outlets including CNN, NBC and The New York Times have declined to publish the images directly, preferring to describe their content instead.

The website of the Telegraph, a UK newspaper, ran a photograph of Charlie Hebdo with its cover heavily pixelated. The image later disappeared from the site. It was replaced by one of Stephane Charbonnier, the satirical paper’s editor killed in Wednesday’s attack. But the image was cropped so as to obscure the controversial cartoon in his hand.

The New York Daily News ran a similar photograph in 2012 of Charbonnier holding a copy of his paper. Editors there chose to pixelate the cartoon depiction of Muhammad on the front cover, but not the caricature of an Orthodox Jewish man standing next to him.

“All an immediate republication of the cartoons would achieve, in my view, is stirring memories of a past injury and perpetuating bad feeling. Is this what we should be focusing on now?” said Lilie Chouliaraki, a media professor at the London School of Economics. “There are times when it's appropriate to self-censor.”

To others, withholding the images amounted to a fresh assault on free speech.

Bloomberg, the Huffington Post and a host of other outlets ran slideshows of the newspaper's most controversial images.

Twitter and other social media networks were flooded with Charlie Hebdo’s colorful, iconoclastic images Thursday afternoon London time, following a call from Index on Censorship, PEN International and other free speech organizations to publish the cartoons as a sign of support.

“Freedom of expression includes restraint, voluntary restraint,” Torner said Thursday. “But this line has to be decided by every author, every editor, every publication. We have to defend the right of every author, every cartoonist to express himself in any way, even if it may be considered offensive.”

Journalists have to weigh a wide mix of factors before including sensitive material in a story, whether verbal or visual. They're taught, as the Society of Professional Journalists puts it, to “balance the public’s need for information against potential harm or discomfort.” That’s just one of a number of considerations to “minimize harm” included in the SPJ’s code of ethics.

Since the global protests in 2005 following a Danish newspaper’s publication of cartoons featuring Muhammad — whose depiction is considered sacrilegious by many Muslims — news editors have wrestled with the depiction of images that provoke offense, even violence.

Does publishing amount to unnecessary provocation? Or is withholding such images a blow to free expression, and an accession to the most virulent opponents of free speech?

“The self-censoring adds insult to injury,” said Tarek Shahin, an Egyptian political cartoonist based in London.

Shahin’s cartoons critical of Egypt’s government and political Islam have over the years elicited threats from Islamists, he said (especially this one).

“My experience pales in comparison to the fate of today’s victims,” he said Wednesday. As an assault on free expression, the Paris attacks are “bigger than 9/11, in many ways.”

The shootings spurred censorship beyond Charlie Hebdo’s archives. The Associated Press abruptly removed the 1987 Andres Serrano photograph “Piss Christ” from its image library in the wake of the shootings, the US website Politico noted.

The AP appeared to have pulled the photo — a controversial art image showing a crucifix submerged in urine — after complaints that the agency left the Christianity-tweaking image untouched, while blurring images of Muhammad.

Journalists have condemned the violence against their colleagues in Paris. Many have not hesitated to use their editorial pages to condemn the idea that blood is a fair price for a drawing.

But Wednesday’s attacks were a chilling reminder to those same editors that some extremists do in fact see things that way.

“Easy to attack papers for not showing cartoons,” tweeted Stephen Pollard, editor of the London-based Jewish Chronicle. “But here's my editor's dilemma. Every principle I hold tells me to print them. But what right do I have to risk the lives of my staff to make a point?”