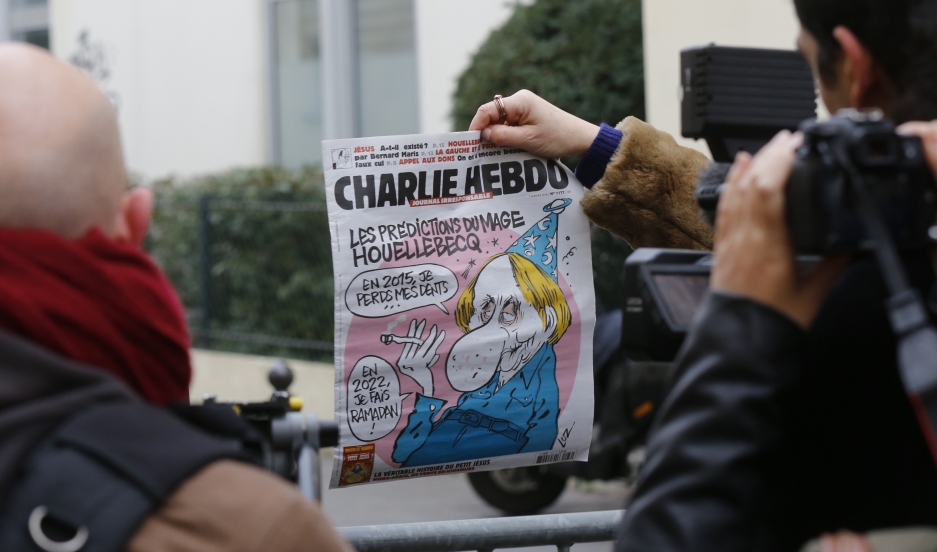 A member of the media makes images of the front page of Charlie Hebdo which shows a caricature of French author Michel Houellebecq near the Paris offices of Charlie Hebdo, a satirical newspaper, after a shooting January 7, 2015.

After gunmen stormed the offices of the satirical newspaper Charlie Hebdo in Paris, having murdered a dozen staff members and police, a video surfaced in which the men shout, “We have avenged the Prophet Muhammad. We have killed Charlie Hebdo!”

Just as quickly, social media was flooded with messages of solidarity tagged #jesuischarlie.

What is Charlie Hebdo? Adam Gopnik, former Paris correspondent for The New Yorker, says “this was not an anti-Islamic magazine in any sense,” but rather “a true equal-opportunity offender.” Its targets included other religions — French Catholicism as well as Judaism — feminism, and the political left and right.

The weekly doesn’t resemble American outlets for political satire like The Onion or The Daily Show. “It’s a much more old-fashioned satirical weekly, the kind of thing you would associate with the 19th Century: scabrous cartoons about a passing event,” Gopnik says. “Not at all meta or ironic, the way an American equivalent might be.”

Yet some Muslim readers interpreted Charlie Hebdo’s irreverence differently. Cartoons lampooning imams and the prophet Muhammad made the magazine the target of a firebombing attack in 2011, as well as legal challenges from Muslim groups. “They were properly and consistently acquitted on the grounds that there’s no law in France against blasphemy,” Gopnik says.

Those attempts to stifle Charlie Hebdo’s outspoken cartoons had the unintended effect of magnifying the magazine’s influence, Gopnik says. “You’d think that in the era of the Internet, an old-fashioned caricature magazine wouldn’t have much grip, but the intensity of their enemies gave them more and more presence.”

Another important bit of context for the attacks is Europe’s growing Muslim population.

“This does certainly come at a moment of maximum pressure on the question of Islam in France,” which is between seven percent and eight percent Muslim — amounting to the largest number of Muslims in any EU nation. The right-wing National Front is increasingly prominent, and Gopnik notes a rise in anti-Islamism in mainstream culture as well: Le Suicide francais (The French Suicide) by the journalist Eric Zemmour has been a “huge bestseller.” Wednesday marked the publication of Soumission (Submission), by the provocateur-novelist Michel Houellebecq. A work of speculative fiction, Soumission depicts life in a near-future, Islamicized France.

In a bitter irony, Houellebecq himself — considered an enemy by Islamists — was lampooned on the cover of Wednesday’s issue of Charlie Hebdo. “He’s shown as Nostradamus making his prophecies,” Gopnik says. “The satirists of Charlie Hebdo were mocking his pretentions to being a mordant prophet of the hideous Islamic future.”