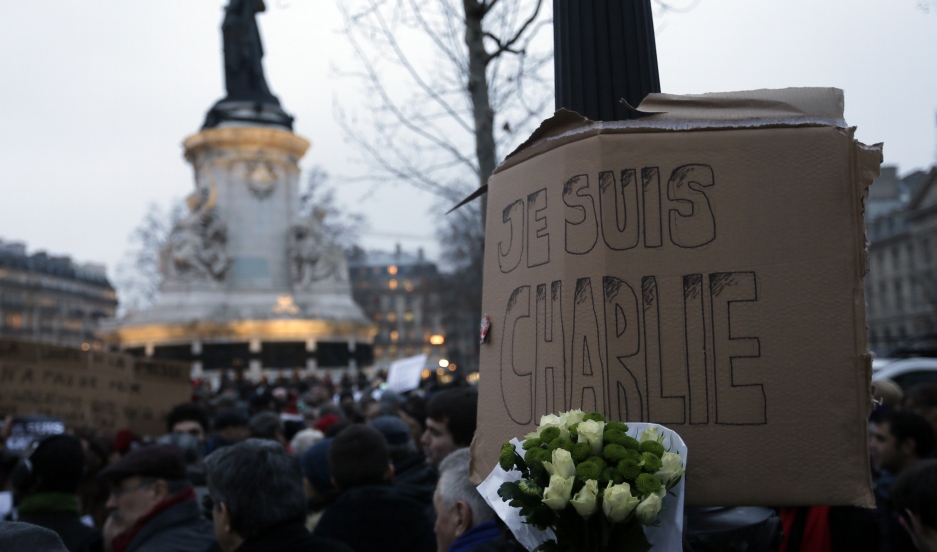 A bouquet of roses is seen near a placard reading "I am Charlie," displayed to pay tribute during a gathering at the Place de la Republique in Paris on January 7, 2015, following a shooting by gunmen at the offices of weekly satirical magazine Charlie Hebdo.

The attack on the French satirical publication Charlie Hebdo has prompted a multitude of questions. Here’s a brief guide by the staff of PRI’s The World. (We’ll be updating throughout the day.)

A. News reports say the two men matching the description of the Charlie Hebdo attackers held up a service station in the north of France on Thursday morning, stealing gas and food and firing gunshots as they fled. Witnesses said the robbers were armed with Kalashnikovs and rocket-propelled grenade launchers. In Paris, the lawyer for Charlie Hebdo said the publication would resume next week, with a printing of 1 million issues instead of the usual 60,000.

Question: Who are the suspects?

A: According to French police, two brothers, Said Kouachi, 34, and Cherif Kouachi, 32, both French citizens, are suspected in Wednesday morning's attack on Charlie Hebdo. Elite anti-terror police conducted operations in the city of Reims, northeast of Paris, throughout the evening. Multiple reports say a third suspect, an 18-year-old, was also sought — but that he has turned himself into police and provided an alibi.

Q: What is Charlie Hebdo?
A: The satirical magazine Charlie Hebdo was founded in 1969 and published until 1981, when it folded. It was revived in 1992. Its name is not from then-leader Charles de Gaulle but from the “Peanuts” cartoons featuring Charlie Brown, says journalist and former cartoonist Benjamen Walker, who’s currently in Paris. As The World's Marco Werman, a longtime reader, explains, the magazine is a sharper equal-opportunity offender than almost anything in the English-speaking world.

A terrible day for all cartoonists. #JeSuisCharlie pic.twitter.com/Ksbl89WLsE

Q: This isn't the first attack on the magazine. What prompted the firebombing that destroyed its Paris offices in 2011?
A: Using the Prophet Muhammad as “guest editor” and depicting his image on the cover of the same issue. The issue threatened 1,000 lashes to people who didn’t think it was funny. The firebombing was just one attack; the magazine had been threatened by Islamic militants since it republished a Danish cartoon of Muhammad in 2006, and a high alert was declared after threats in 2012.

Q: Who are some of the people that died?

A: One was the editor-in-chief, Stéphane Charbonnier, aka “Charb.” The BBC reports he’d “received death threats in the past and was living under police protection.” He recently poked fun at extremists inability to conduct an attack:

Also among the 12 victims of the attack were three more cartoonists, who were among the magazine's most well-known contributors:

Charb, one of the cartoonists killed today in Paris, after receiving death threats. RIP. pic.twitter.com/hK3buschqS

A. It featured a cartoon of Abu Bakr al-Baghdadi, the leader of jihadi group ISIS, with the words, "Best wishes, by the way. To you too, al-Baghdadi," while he says, "especially to your health." It is not known at this stage if the tweet, published about the same time as the attack, has any other connection to the attack.

A: Literally “I am Charlie," a phrase used in solidarity for the puckish, often politically incorrect publication. Many people have begun using an image of the phrase on social media for their profile photos, including the American embassy in Paris.

Q: Even before we know much about the perpetrators, suspicion has fallen on Muslims. How are some Muslims responding?
A: Many Muslims expressed their feelings of revulsion on social media. Iyad El-Baghdadi, a Palestinian activist and writer living in Norway, grabbed a lot of attention with tweets like this one.

As a Muslim, killing innocent people in the name of Islam is much, much more offensive to me than any cartoon can ever be. #CharlieHebdo

But supporters of ISIS and other jihadi groups have celebrated the news on social media, and others have said that insulting cartoons of Muhammad and other prophets are not rightly covered by freedom of speech.

Freedom of expression does not extend to insulting the Prophets of Allah, whatever your views on the events in Paris today! #ParisShooting

Q: How have the French reacted?

A: Demonstrations and vigils began in the early evening on Wednesday in cities around France, including one in Paris' Place de la Republique where people held up pens in solidarity with the dead satirists and cartoonists.

(NOTE: The above photo is from the Charlie Hebdo demonstration in the city of Rennes, not Paris.)

But by Thursday, several attacks on mosques had taken place in cities around France.

French cartoonists also joined colleagues from around the world in drawing tributes to Charlie Hebdo and its dead staffers. BuzzFeed

(The caption reads "Ducks will always fly higher than guns," using French slang for a newspaper.)

RELATED: Marco Werman explains why Charlie Hebdo is one of a kind