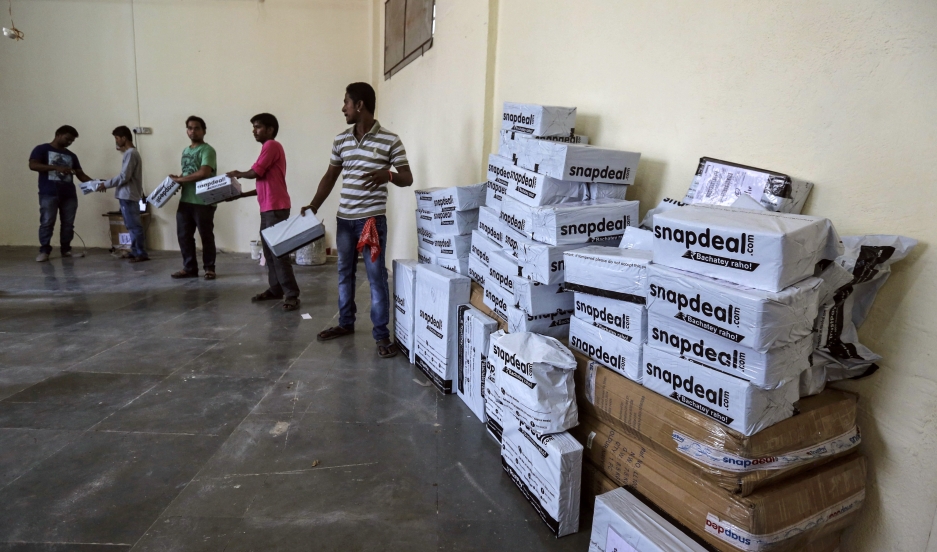 Employees of Snapdeal, an Indian online retailer, sort out delivery packages inside their company fulfillment center in Mumbai on October 22, 2014.

When Mumbai resident Laxminarayan Krishnamurthy wanted to order a phone for his wife, he turned to the Internet, selecting a Samsung Galaxy Core 2 smartphone e-retailer Snapdeal.com. But when he opened the package in October, it contained a slightly different product: brick and a bar of soap.

Stories like these are why India, which is set India is set to pass the US as the country with the second-largest number of Internet users, is still lagging behind in the online retailing world. Despite investors pumping billions of dollars into online retailers, bad service is only one of the many problems undermining online merchants.

Flash back to "Big Billion Day," a major sale from e-tailer Flipkart, and similar sales offered by other site during Diwali season in October. Goods were sold out within seconds and sites were plagued with glitches like crashing servers, unresponsive  shopping carts and irregular pricing.

@myntra #bad... placed 2 orders and made payment and got the order ids as well. But it seems no order is placed. #soldoutproducts

It's not just the retailers, either: Delivery networks are another major problem. Items bought during these mega sales usually take around two weeks to reach the buyer, which is an absolute shambles. This is largely due to shortage of cargo space on airlines, resulting in piles of shipments gathered at airports across the country.

Add to that security concerns — Laxminarayan Krishnamurthy's phone was stolen by middlemen while en route to his house, Snapdeal told him — and the sheer difficulty of building an efficient delivery network in a country where millions of customers are living in more than 100,000 zip codes. It's a daunting task.

Government regulations are yet another hurdle for e-retailers in India. To protect local merchants, the government prevents companies with foreign investments to operate as retailers online. Instead, Amazon, Flipkart and Snapdeal all act as online bazaars, presenting substantial uncertainties over their operations.

But all is not gloomy in India’s e-commerce world. Despite the difficulties, sales are booming and the industry will see huge growth as more Indians come online. Sales through e-tailers are expected to jump 70 percent this year, reaching $6 billion.

Those numbers have persuaded many foreign investors to pour in cash. Billionaires Masayoshi Son and Yuri Milner have committed a combined $3.6 billion in investments to Flipkart, Snapdeal and Amazon India. And in July, Amazon announced that it plans to spend $2 billion in India to expand operations.

And as for Laxminarayan Krishnamurthy, he was gifted the phone he had ordered — along with two bottles of dish soap by Unilever.

This story by Sourabh was originally published by our partner Global Voices Online, a community of bloggers from around the world.