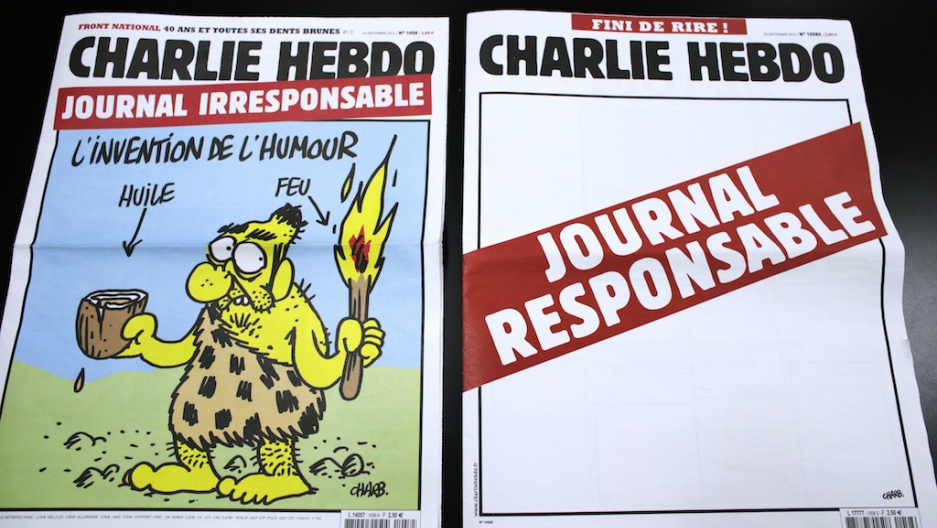 A picture taken on September 25, 2012 in Paris shows two editions of French satirical weekly Charlie Hebdo, one reading 'Irresponsible newspaper' (L) and the other, bearing an empty front page reading 'responsible newspaper.' These two editions were released one week after the magazine published an edition containing several cartoons which featured caricatures of the Prophet Muhammad.
Credit: KENZO TRIBOUILLARD
Share

LISBON, Portugal — "This might sound a bit pompous, but I'd rather die on my feet than live on my knees."

The words came from Stephane Charbonnier, aka Charb, cartoonist and director of the French satirical weekly Charlie Hebdo, in 2012 after a firebomb attack on the paper's Paris office.

On Wednesday Charb was among 12 people killed during a terrorist attack on Charlie Hebdo by masked gunmen crying "God is Great" in Arabic as they gunned down journalists, cartoonists and police officers.

Charlie Hebdo had been a target since 2006 when it published caricatures of the Muslim Prophet Muhammad that originally appeared in a Danish newspaper.

Despite repeated threats, the paper had refused to shy away from controversy.

Islamist radicals were among the favorite targets of its biting, sometimes crude, satire — along with French politicians, religious leaders of all denominations and celebrities from Michael Jackson to anti-Semitic comic Dieudonee M'bala Mbala.

This week's cover lampooned French novelist Michel Houellebecq, whose latest book has triggered a raging controversy by portraying a France in 2022 run by a Muslim leader who seeks to turn Europe into an Islamist empire.

Charb was among several well-known figures slain in Wednesday's attack on the paper.

Chillingly, he published a cartoon in this week's edition showing a bearded terrorist under the title, "Still no attacks in France." The figure replies: "Wait, we have until the end of January to present our best wishes."

The gunmen were apparently aware that the paper's journalists and cartoonists gather for their weekly editorial meeting on Wednesday mornings and the newsroom was packed.

Another cartoonist Corrine "Coco" Rey said she was forced at gunpoint to open the doors of the building and then hid under a desk while the gunmen opened fire on her colleagues with automatic weapons.

The attack lasted five minutes, she told the daily L'Humanite, and the gunmen told her they were from Al Qaeda.

Charb had constantly defended the magazine's acerbic satire as an essential part of a vibrant free press.

More from GlobalPost: How to stop Islamic extremism in Europe

Threats and criticism had flowed in after covers like the 2006 edition with the headline "Mohammed overwhelmed by the fundamentalists" that showed a caricature of a weeping prophet complaining: "It's hard to be loved by jerks."

A 2011 paper purported to have hired Prophet Muhammad as a guest editor and featured a smiling image on its cover warning readers they risked "100 lashes if you don't die laughing." That prompted the firebomb attack that damaged the paper's office.

Charb responded by arguing that "a cartoon never killed anybody."

Charlie Hebdo was founded in 1969 as part of a long tradition of satirical newspapers in France.

Its predecessor was banned after mocking recently-deceased President and war hero Gen. Charles de Gaulle. The paper's name was inspired by Charlie Brown from the Peanuts strip, as well as making a sly reference to de Gaulle. Hebdo is French slang for a weekly.

The paper went out of business in 1981 but was revived a decade later.

President Francois Hollande was among those mocked by the paper. After his clandestine affair with actress Julie Gayet was revealed last year, it ran a front-page cartoon of the president showing his penis poking through the open zipper of his pants and asking "Me, the President?"

"An act of extreme barbarism has been committed in Paris today," Hollande said when he visited Charlie Hebdo's office after the Wednesday attack. "An attack against a newspaper, that means against the expression of freedom, against journalists who always showed that in France they could defend their ideas."