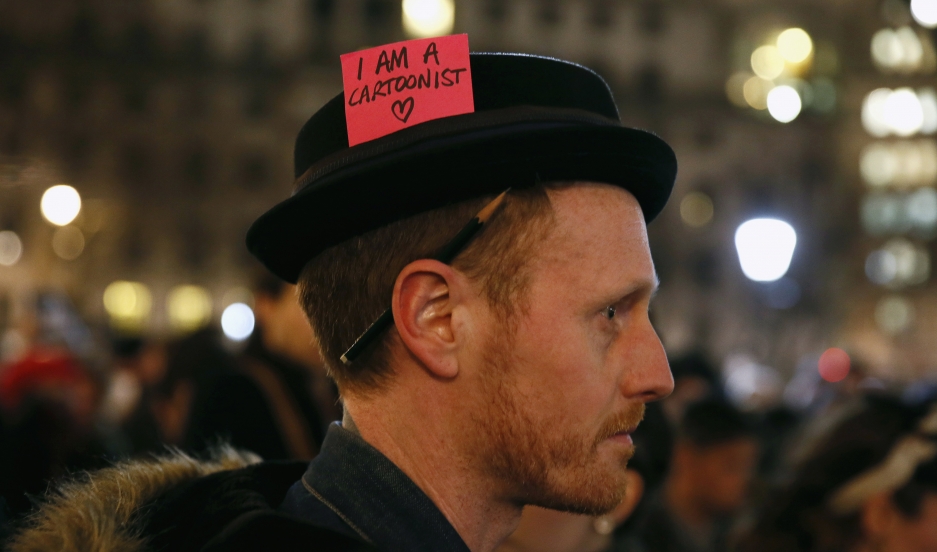 People take part in a vigil to pay tribute to the victims of a shooting by gunmen at the offices of weekly satirical magazine Charlie Hebdo in Paris, at Trafalgar Square in London, on January 7, 2015.

The fallout from the Wednesday morning shooting at French satirical magazine Charlie Hebdo already reaches much farther than the streets of Paris.

The attack has had serious repercussions for the global security state, thrown the idea of free speech into tenuous waters, paved new grounds in the rhetoric and actions of the world's diplomats, and catalyzed a global conversation about radicalization and terrorism in 2015.

On free speech and censorship:

"Horrible, but at least they did something very targeted vs taking out an entire building of unrelated people. Probably people will be even braver in free speech now to show support and have their deaths not be in vain." - Anonymous SafeMode SMS member

"Classic bullying attempt by the extremists to silence free speech. Unfortunately it might work. Even a passionate (stubborn) person will have to think twice before publishing anything innocent that might be considered offensive by certain groups. No easy answer than to find a way to make these bully tactics painful for the perpetrators." - Blake Koepke, SafeMode SMS member

"Sadly, an attack like this could lead to self-censorship, either by writers/cartoonists themselves or by their publications. When content is so easily accessible and globally spread thanks to the Internet, it puts more publications at risk of "offending" those who want an excuse to inflict violence. I hope I'm wrong, but it's not surprising that an editor or business exec of a news organization could assess a piece of content simply based on whether it could get his/her employees killed. But this is exactly when we ought not be censoring ourselves. Free speech can't be stifled by fear." - Dalia Mortada, SafeMode Facebook community

"This is still a law-and-order issue. Free speech assumes protection - if existing law-and-order infrastructure cannot provide that protection (this one is definitely beyond their scope) the situation command and control needs to be escalated higher and appropriate plan and action must be implemented. This escalation is indeed happening in Global format (that's appropriate) but not fast enough I feel." - Bhaskar Ganguly, SafeMode SMS member

"Why doesn't the EU have a security program, of which interested businesses could apply for funds to protect their interests. These extremists (whatever we should call them), think they are breaking the bank, when really the more harm they do should be bolstering respective countries' economies. Hearts out to all the victims of this cowardice." - Richy Shepherd, The World's Facebook page

"We know free speech is a basic human right but suppressed by oppressive regimes, groups and organizations and international security would be spread thin to try and protect publicly known free speakers. Its no doubt then that the international security community should be, if they aren't already, monitoring the chatter of activist groups through social media monitoring and other intelligence. Especially the activist groups that are known to be more aggressive in their tactics." - George, SafeMode SMS member

Given these facts, what the heck happened to our 'all-knowing' security agencies regarding this attack? #CharlieHebdo

On radicalization and terrorism:

"A precedent was set by extremists years ago with the [attempted] murder of Lars Vilks. Defending free speech in the ideologically divided quarters of Europe will now take blood instead of rationality. It's up to Europe to decide what to do next. It's as if any action against Muslim extremists can be seen as attacks on the Muslim community at large. This makes for a hard real and political fight." - Garrick Burger, SafeMode SMS member

"I don t fear for the extinction of brave, moral reporters; I my concern is for the reception of their message. Fear has always been a powerful tool for social control." - Ian Iary, SafeMode SMS member

Paris terror attacks: US, world must adapt to new face of terror, get serious about security #CharlieHebdo http://t.co/zasCKKAhWK

"This shooting will cause further uproar in the islamiphobia camp, but also give the french and the international community reason to limmit freedoms in lieu of safety. Much like the American people after 9/11. I truely hope it doesn't." - Caitlin Dally, SafeMode SMS member

"Seems to be the way of it these days, nutters on either side using freedom of speech or religion to either facilitate profit and or violence." - Bruce Warner, SafeMode Facebook community

"Activism has blood on it's hands." - Anonymous SafeMode SMS member

"I don't draw as activism, but as revenge against human idiocy everywhere" –Cabu in 2006 #CharlieHebdo #JeSuisCharlie pic.twitter.com/66VNuKvZhh

Want to add your voice to our SafeMode coverage? Join our Facebook community or sign up for the weekly newsletter. You can also join our SMS community by texting "SAFEMODE" to 698-66.