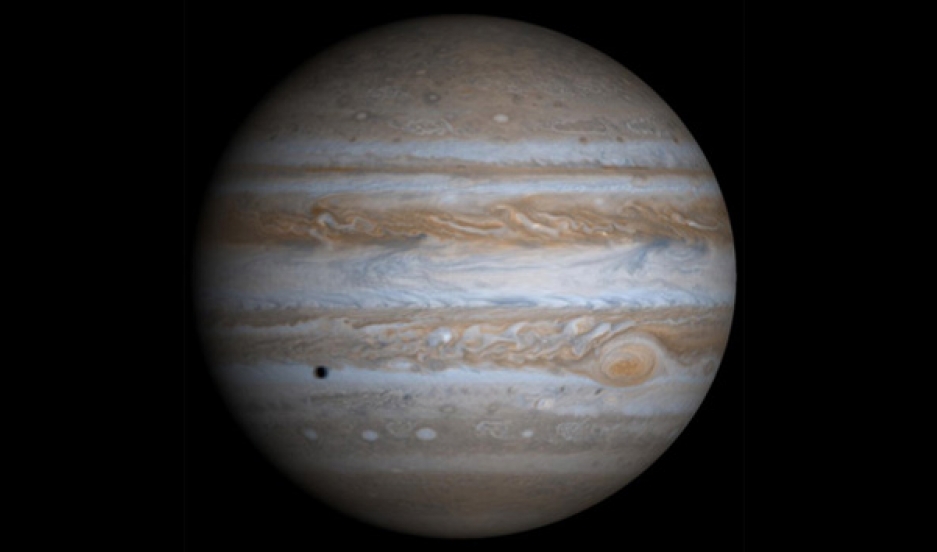 A true-color image of Jupiter taken by the Cassini spacecraft. The Galilean moon Europa casts a shadow on the planet's cloud tops.

While new technologies for planetary science and space exploration show great promise, the budget for space technology got short shrift in the spending bill recently passed by Congress.

Peck argues the history of the space program clearly demonstrates that innovations developed for NASA "turn into products and services that make American companies competitive: they create jobs, they create revenue. They even save lives."

Since 2006, Peck has been working on very small satellites — about the size of a coin — dubbed Sprites. He and his team developed three prototypes, called KickSat, in 2011 and sent them to the International Space Station last April.

One of Peck’s students, Zak Manchester, designed "extraordinarily innovative technology" that allowed the tiny satellites to communicate from over a thousand kilometers away using just a fraction of a watt of power.

And the "Kick" came from Kickstarter, the crowdfunding website. The project attracted more than 300 backers from around the world, raising more than twice the $30,000 goal. It was enough to build a satellite the size of a loaf of bread, pack it with a hundred Sprites and send it into orbit.

“That is a watershed event," Peck says. "That we can now expect, as just members of the public, to participate in space exploration and science [is] a trend toward democratizing space.” Even high school students are getting into the act: Thomas Jefferson High School in Fairfax, Virginia, launched a small satellite in November of 2013.

Another promising new idea is "massless exploration." “Right now all the mass we [use] to build things for space we take from the Earth,” Peck explains. “We’re saying that all the mass we need to explore the solar system is already in space. It's just in the wrong shape.” Peck believes space mass could be made into the right shape using 3D printing technology or other forms of additive manufacturing.

Then there’s the tractor beam. “You can never go wrong being inspired by Star Trek,” Peck says.

This idea has to do with magnetism. A fixed magnet will attract a piece of iron or steel, but you can only attract aluminum, copper or other conductor metals by moving the magnet around. "If you move the magnet around just right, you can pull or push or slide to the left or right any conductive surface," Peck explains.

Since spacecraft are mostly made out of conductive materials like aluminum, copper and carbon fiber, a moving magnet could maneuver a neighboring spacecraft.

"We can use them for fixing spacecraft, refueling them — maybe even building them in place,” Peck says. “It's not as extraordinary as the Star Trek tractor beam: you have to be a few feet away, at most. But still, you can do all this without touching the spacecraft, and that means it's safe and reliable."