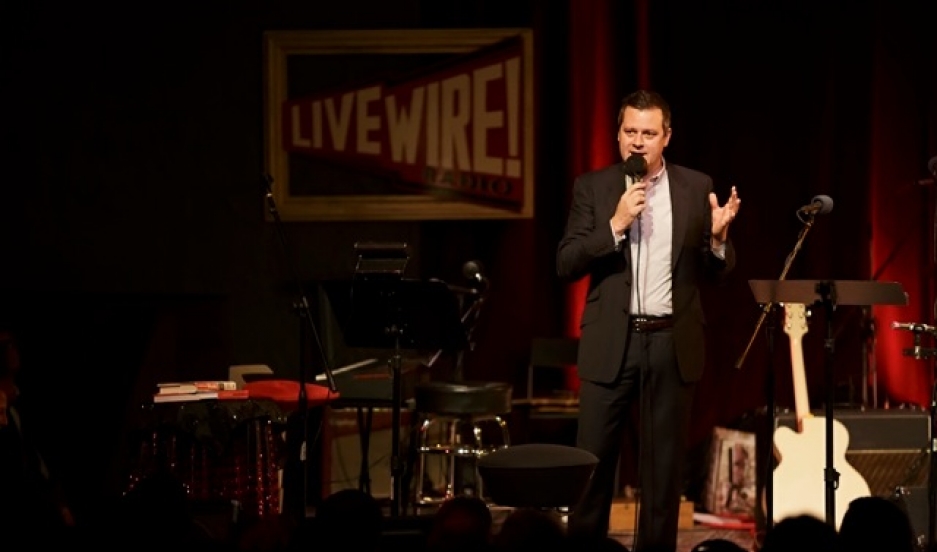 Luke Burbank stands before a live audience during a taping of Live Wire.

In addition to showcasing some of the biggest names in arts and culture, we also pride ourselves on featuring the work of up-and-coming talent and thought leaders that you might not meet anywhere else. Here are some of the highlights from this year.

The last 90 seconds of this interview taught me more about theoretical physics than all my years studying at Harvard and Oxford. I should clarify that “Harvard" and “Oxford" are two of my favorite sports bars in Tucson.

Anis Mojgani’s writing and delivery radically changed my notion of what poetry could be and how it could move me. Which is a weird realization to have as you’re crouched on the side of the stage trying to prep for your next interview segment. And yet, that’s how great this poem and performance were.

Let’s be honest, kid’s books are kinda boring when you’re not a kid anymore. That is, unless you create dark adaptations. Which we did this year. Then, they are upsetting and weird, two of our specialties here.

Megan Amram grew up in the wilds of Portland and then went on to Harvard (the college, not the sports bar). Yet it was on Twitter where she first started getting widespread notice.

Eef Barzelay — All The Way

Eef Barzelay’s version of “All The Way” is lovely and heartbreaking. Heartbreak like a Portlander feels when they realize that scone had gluten in it.

Kurt Braunholer’s misadventures make us all feel better about how we proposed marriage and decided not to jet ski down the electrified section of the Mississippi River.

In these trying times of international crisis and unrest at home, there are two things we can still rely on as a nation — Cats & Netflix. This is an entire song dedicated to them.

Questions and Appetizers with Ken Jennings

For someone who talks for a living, I am uniquely terrible at the conversation game we played with Jeopardy champ Ken Jennings. Hopefully my shame was at least somewhat entertaining.

Cameron Esposito is more than just a hairdo. But seriously, no one’s made more of a career out of having self-described “lesbian hair”.

Without a doubt, one of the musical high points of 2014. The crowd was so into this song, we considered cancelling the rest of the show and just letting Ayron play an entire concert. Then I found out that I only get paid if I “host” the “entire” “show,” so we went back to the original plan.