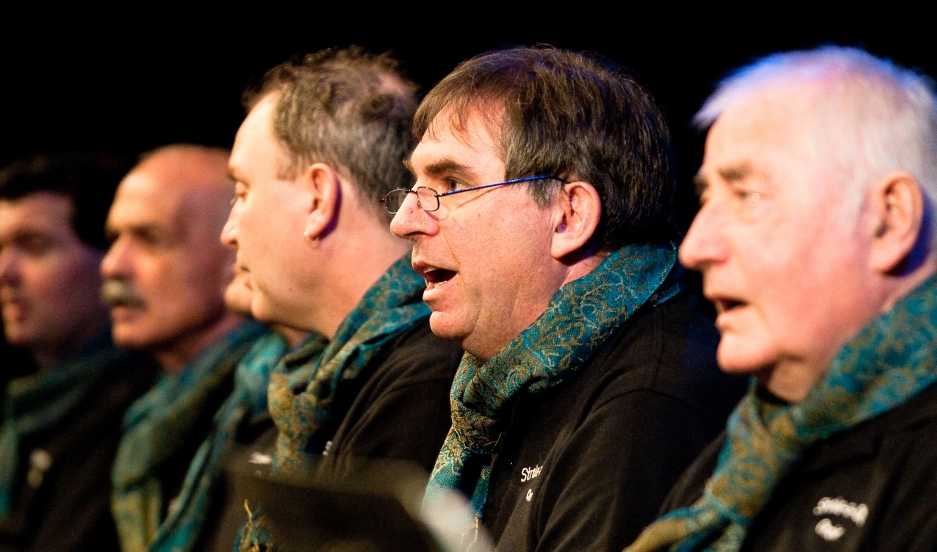 Tim Adams (center, in glasses) suffered a stroke several years ago that affected his ability to speak. But he's been singing with the Stroke a Chord choir outside of Melbourne, Australia.

“Welcome to the Stroke a Chord choir, my name is Tim Adams.”

Adams, a 49-year-old lawyer from Australia, was training for a marathon about four years ago when he suffered a massive stroke. He survived, but the stroke damaged the part of his brain that controls speech. The condition is known as aphasia.

But sometimes people who can't speak can sing, because the two acts are controlled by different parts of the brain. And that's how the Stroke a Chord choir in Melbourne can exist.

“The choir can sing because they have music processed in the right side of the brain, or in a bit more diffuse areas of the brain, so singing is left relatively untouched in a left hemisphere stroke," explains Bronwyn Jones, a speech pathologist who has worked with the choir since 2010.

“Tim came to the choir and he had recently had a stroke and he was not speaking a lot when he first came," Jones explains. "Being so young, to suddenly lose your work, to lose your physical ability to lose your speech — they call it a stroke for good reason. You’re just struck down and in a number of ways.”

The choir has been huge for him.

“My speech pathologist put me onto it,” Adams says. “I can’t thank her enough. It’s exquisite.”

“For the first six months, I talked, yes or no," Adams remembers. But his speech has improved since then, in part thanks to the choir. "Slowly, slowly the words came back. I’m here now and yeah, it’s been a wild ride.”

Jones says it's not just Adams' language abilities that have come back, either. “He has been amazing in how he has improved — both with his speech and with being more and more outgoing,” he says.

The choir includes stroke victims of different levels of speech ability, some of whom are worse off than Adams. “Gus, the choir member who sits next to me, has no speech at all," he says. "But he can sing along, so it’s a wonderful language.”

The choir's performances have given Adams special memories as well. "One of the things that had the most impact on me — this child had never heard her grandfather's voice, and he could see it in her eyes and when she said, 'Grandpa, that’s the first time I’ve heard your voice.' He was absolutely blown away.”