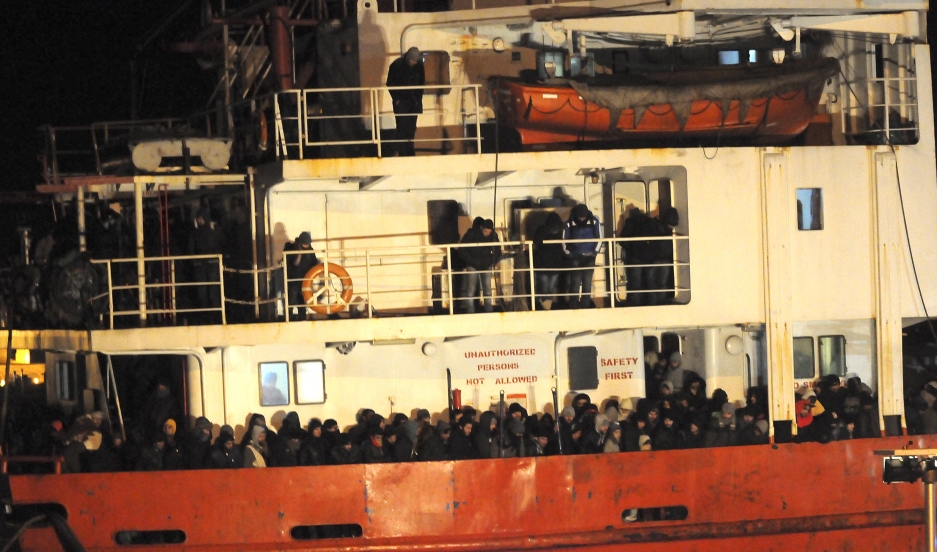 A ship called Blue Sky M docking in southern Italy on New Year’s Eve 2014 after being rescued. Locals interrupted their celebrations to help the hundreds of freezing refugees on board.

It could be a plot from a movie: Hundreds of war refugees, including children and pregnant women, are packed onto a freighter by smugglers in a desperate attempt to reach a peaceful country. But when they near their destination, the smugglers point the vessel toward the coast and then abandon ship, leaving the refugees to fend for themselves — during a storm.

But that's what actually happened off the coast of Italy on Friday. It's the third such "ghost ship" incident that Italy has seen in the past two weeks alone, including one that occured on New Year's Eve.

“Everyone was partying, or thinking about going to a party, for the last day of the year," says Mimma Antonacci, a Red Cross spokeswoman in the southern Italian city of Lecce. But when news came of the ship, she says, people stopped “and they asked us what they can do. And when they saw the people arriving, they started cooking.”

Monasteries and other religious buildings have opened their doors to provide shelter, she says, and locals also chipped in with lots of donations.

“Many people came with clothes, shoes, food. Everybody helped us. Socks, shoes for children, even cookies and milk," Antonacci says. "They don’t ask for anything. They do it in silence, without any clamor or TV [coverage.] They work hard, no matter what day of the year, no matter who was partying or not. The solidarity here is wonderful.”

The efforts, she says, are much needed. The refugees on the ships often arrive in poor health. “They’re not in good condition,” Antonacci says. Many have hypothermia, and there are cases of frostbite and fractures. One woman even gave birth aboard the ship.

Even the refugees who arrive without major medical issues are exhausted and afraid. “You can see in their eyes and in their faces how they have struggled," Antonacci says. "Days and days of traveling, walking, driving — with children.” And that's even before the terror of being abandoned at sea.

The tactic of abandoning these large ships close to shore appears to be a new method for traffickers, who buy cheap freighters waiting to be scrapped. Italy received at least 170,000 asylum seekers by sea in 2014. The three ships used in the most recent incidents carried more than 2000 people in all. Previously, smaller vessels were used to bring migrants to shore.

A passage on board one of the ships costs from $1,000 to $2000 per person, and Antonacci has spoken with people who sold everything they had to make the journey. Now that they're in Italy, many of the refugees are trying to reach relatives elsewhere in Europe. Some have already departed on trains. They will be treated as asylum seekers.