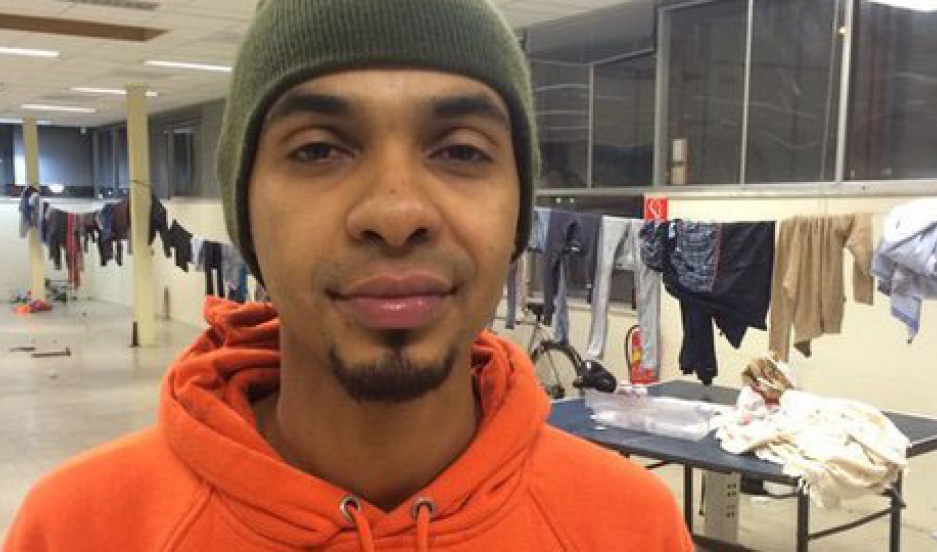 Attas, 22, is currently living with 70 other homeless migrants in an abandoned office building in Amsterdam. The Dutch govenment this week rejected a UN call to assist homeless migrants by providing them food and shelter.

The winter temperatures don't make it easy to be homeless in Amsterdam. And for African migrants who are either waiting for their asylum cases to be heard or have already had their applications rejected, the situation is getting worse.

The BBC's Anna Holligan recently met with some migrants holed up in Amsterdam. She says they live in a kind of limbo, not able to find work or buy food, and not able to return home.

“I found them in an abandoned office building in Amsterdam. They moved in because they have nowhere else to go, otherwise they would be out on the streets," she says.

There are an estimated 100,000 refugees and asylum seekers in the Netherlands.

"This really breaks the image, internationally, the Netherlands has of being a tolerant and liberal country, because right now there’s a huge immigration debate going on. The anti-immigration party in the Netherlands is at the top of opinion polls at the moment and the government doesn’t want to attract any more asylum seekers," Holligan says. "That’s why they have implemented this really tough, harsh policy — especially over these freezing winter months.”

The Dutch government currently allows migrants to apply for asylum, but if their claims are rejected, they are supposed to leave the country, possibly to return to their country of origin.  If they don’t want to go home or if they refuse to go home — many believe their lives or their families' lives will be in danger if they return home — they are left to their own devices. The UN has sharply criticized the Dutch policy:

"It is appalling that the Dutch government will not even commit less than 0.01 percent of its yearly budget to help people living in absolute misery and poverty," says Philip Alston, the UN special rapporteur on extreme poverty and human rights. "Assisting migrants living on the streets is not a matter of charity. "

Alston also questions the logic of denying migrants basic necessities as a way to discourage asylum seekers from staying in the Netherlands.

"One could imagine, 'let's use stun guns to get these people out of the country'. What's the limit to the means that you're going to use if you're not going to fall back on at least basic minimum standards of decency. There are other ways in which those problems have to be addressed."

Several of the migrants told Holligan they can’t get jobs, and they don’t have any money to buy food or clothing, so they’re relying on the kindness of strangers. Holligan says “the concrete walls of the building were cold. A volunteer came by to drop off some crates of food, which were divided up and rationed among the migrants. It’s a real, real struggle for them.”

Despite the condemnations, the Netherlands, says Holligan, has resolutely refused to soften its approach. Officials have postponed any rollback of its strict asylum policy until the next meeting of EU foreign ministers, scheduled for March.

Amsterdam’s homeless migrants come from different places and via many different routes, Holligan says, but in Amsterdam, they share a common fate.

“It’s a really tough situation. It’s not one that anyone would choose to be in, but they’re making the best of their situation. I suppose their hope is that the Dutch government will reconsider their cases because they feel they’ve made a good case to stay in the country," she says. "The Dutch government just has to believe there is a real danger if they were to be sent home. I suppose that’s their hope, that their patience and willingness to sit through the next few months will eventually pay off with a life and hope in Europe.”

Stories from migrants living in limbo, with no help from the Dutch government http://t.co/kckRyTNH1e