Until about a month ago, Sean Scantlebury didn't use Skype.

That ended when his manager, Jonathan Hollander, who's also the artistic director of the Battery Dance Company in New York, gave him a new assignment: Teach an Iraqi student.

Since then, Scantlebury and Aadel Qies, who's based in Baghdad, have been connecting on Skype regularly for dance lessons. "It's hard to teach dance to someone when you're not in the same room," Scantlebury says. "You try and say you need to point your foot here and you try and touch him, but you can't because it's on cyberspace."

And that's when the Skype connection is working; the line to Baghdad can be unreliable. But so far, the challenges haven't stopped them. 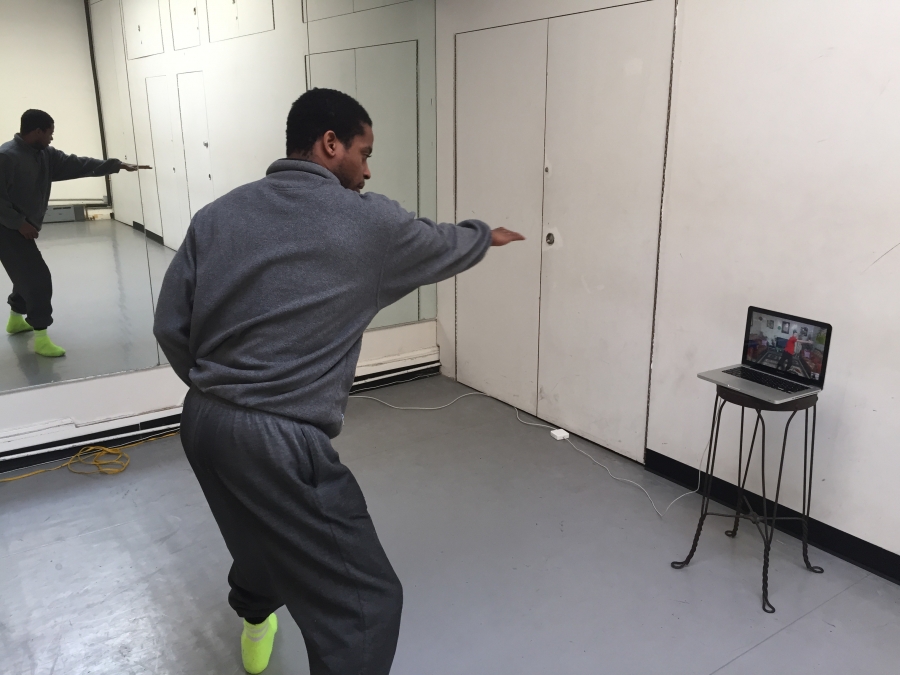 Qies is studying to become a lawyer, but his passion is dancing. He doesn't have access to a professional dance studio in Baghdad, so he practices at home, in his living room. "He practices on a rug," Scantlebury says in disbelief. "It's not even harlequin floor, it's a rug!"

The Battery Dance Company has been organizing workshops for youth and young adults across the world for years. They set up a program called "Dancing to Connect" in 2012, a series of dance worskshops for youth in Iraq.

As the Islamic State was taking over parts of Iraq last summer, Hollander received emails and Facebook messages from a couple of young Iraqis. "Some were musicians, one was an actor, and a couple were dancers, including Aadel, who, though Kurdish, lives in Baghdad," Hollander wrote in an email.

"All of them were depressed, felt isolated, and seemed to thrive on communication with the outside world," he added. Qies' messages would contain lines like "I'm living in hell."

Then Hollander asked Qies to send a video of his practice and offered to pair him up with Scantlebury, his "urban dance specialist." Scantlebury was stunned by Qies' performance and didn't hesitate to arrange the Skype lessons.

The pair hold one or two sessions per week, fighting against the spotty Internet connection. But Scantlebury says lack of resources isn't Qies' only problem. His family and friends aren't very supportive of his passion for dancing.

Scantlebury knows that feeling well: His family moved from the West Indies to the United States when he was 4. "My family didn't like the idea of me dancing because they came all this way to have a better life for me," he says. Dancing, they felt, wouldn't get him far in life.

Life in Brooklyn in the 1980s also wasn't easy. "I got beat up every day and I got called names," he remembers. But he never gave up on dancing, and now he wants to make sure Qies won't quit, either.