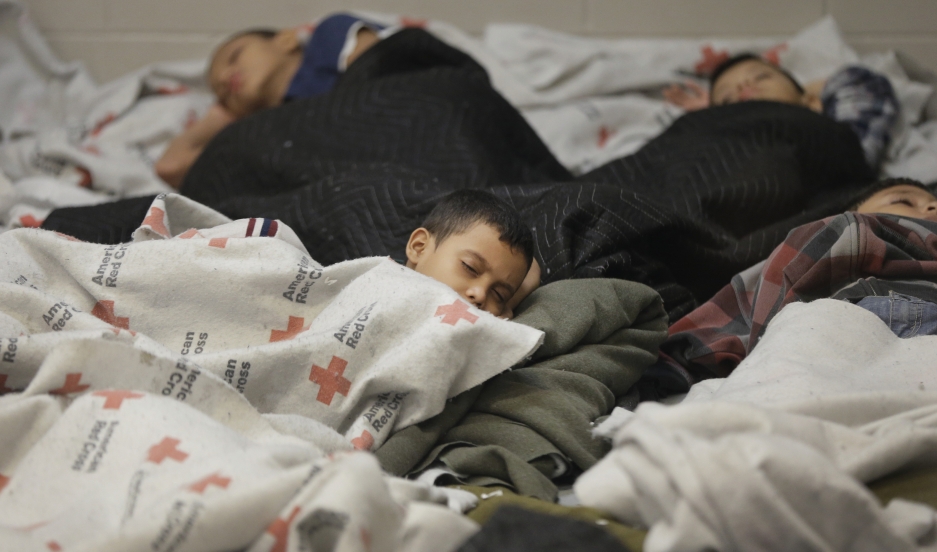 Detainees sleep in a holding cell at a US Customs and Border Protection processing facility, in Brownsville, Texas on June 18, 2014. Almost 70,000 unaccompanied children crossed the border from October, 2013 through the summer of 2014. Here's the story of one of those children, Carlos, who fled violence in Guatemala but ended up in danger at a New York shelter.

How people move across borders is, ultimately, a very human story.

In 2014, the largest immigration detention center opened; refugees from Bhutan struggled with depression and suicide; migrants rode The Beast. The stories that show both the scale and humanity of these immigration events top our list of must-reads on US immigration from 2014. These five stories were chosen by members of the Global Nation Exchange, a discussion group we host on Facebook. Members come from all walks — they are advocates, immigrants, the children of immigrants, writers and thinkers, scholars and scientists — so their choices reflect a broad range of interests.

The stories happen on the US-Mexico border, in New York City and Portland, in Washington DC and California. 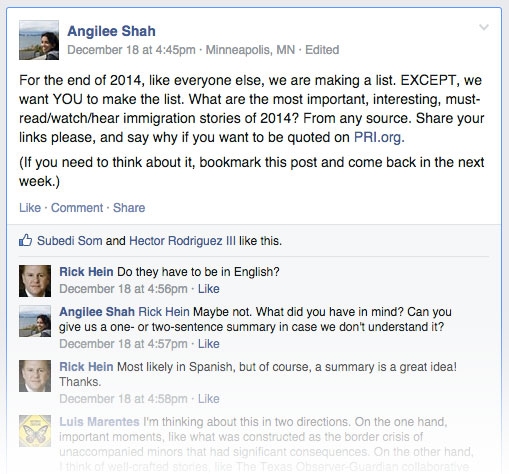 What's your favorite immigration story of 2014? Share in the Global Nation Exchange.

The Texas Observer and the Guardian

This four-part series by Melissa del Bosque dives deep into the deaths of migrants on the Texas-Mexico border. The stories follows migrants, land-owners, advocates and law enforcement, who all grapple with the hope and heartbreak of the journey. Luis Marentes, associate professor of Spanish at the University of Massachusetts Amherst, chose this story as a must-read this year. He calls the series “an excellent example of digital/multimedia journalism, beautifully presented and nuanced in its content.”

Refugee advocate Som Subedi is featured in this report by John M. Gliotta, and he also chose it as a good read for this year. Subedi says the story helped to show a disturbing trend and lack of government response, and highlights the round-the-clock work done by refugee and immigrant advocates. He also says, “I am saving this for my to-be-born daughter, to remind her of daddy’s work as a first-generation [immigrant] in this country.”

With deportation relief for millions of undocumented immigrants this year also came increased detentions. A few weeks ago, the largest permanent immigration detention facility in the country opened in South Texas. It is run by a private prison company and is built specially to hold women and their children. Hector Rodriguez III, a first-grade teacher and creator of El Peso Hero, chose this story because it hit close to home: “Being an educator in Dallas, I've seen first hand the repercussions of families being separated and all the stress that affects young learners. It is very difficult to console [them].”

Why would any parent send their kids on the deadly trip to cross the Mexico-US border?

If you missed it the first time, this report from Jennifer Collins in collaboration with Round Earth Media answered a question raised by so many of you this summer. With all the dangers involved in making an illegal crossing over the border — from the perils of jumping on the freight train known as "The Beast" to the chance of being detained in Mexico or the US — why would parents pay smugglers large sums of money to send their children on the journey? In this story, we meet Jose and Ester, undocumented immigrants in the US who asked their two sons to make the trip from El Salvador. Twice. Understanding their desperation to make a living, find a safe home and be together is crucial to understanding why so many children crossed the border alone this summer. So this is my pick for 2014.

Others in the group chose stories about companies’ searches for skilled workers and H1-B visa changes, connections between immigrants and the Black Lives Matter movement, and even commentaries on the blockbuster podcast Serial. See the complete list and add your own choices in the Global Nation Exchange discussion group on Facebook.