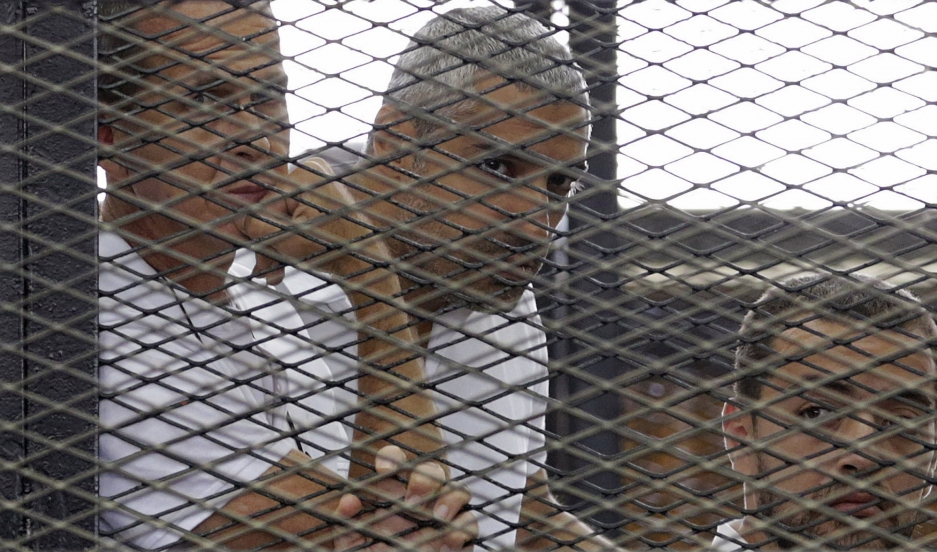 The New Year has brought a glimmer of hope for three Al Jazeera journalists who've spent the past year in jail in Egypt.

Australian Peter Greste, Canadian Egyptian Mohamed Fahmy and Egyptian Baher Mohamed were sentenced to seven years in prison last summer after Egypt's military-backed government charged them with, among other things, conspiring with the Muslim Brotherhood to broadcast false reports. Fahmy got an additional three years for being found in possession of a spent shell from a gun. The journalists insisted they were just doing their jobs.

“Rights advocates who monitored the proceedings said that the prosecutors presented very little evidence on the charge that the journalists were broadcasting false news,” says Kareem Fahim, Middle East reporter for the New York Times. “The trial from start to finish seemed to rely on scant evidence and was widely viewed as part of a much broader political feud between Egypt and Qatar, which owns Al Jazeera.”

Fahim says the tension between the two countries stems from Qatar’s support in Egypt and throughout the region for Islamist groups, political Islamist groups like the Muslim Brotherhood. “That tension became pronounced after the military ouster of Egypt’s President Mohammed Morsi in 2013. Mr. Morsi, of course, was a Brotherhood leader.” The new military-led regime outlawed the Brotherhood.

“Qatar, in a number of ways, including through an Egyptian affiliate of the Jazeera news channel, continued to support the Islamists in Egypt — and this was a great aggravation to Egyptian officials,” he adds.

An international campaign has pushed for their release since they were picked up.

Their lawyers went to Egypt’s highest appeals court on New Year’s Day and argued for a new trial, citing procedural flaws in the initial trial last summer. The court granted the request, but refused to release the three men from jail.

Fahim says the men’s relatives and lawyers were cautiously welcoming the court’s decision, but were a little "stunned" that the journalists were not released.

Another cause for hope for the families of the "Al Jazeera Three" is that there has recently been something of a thaw in relations between Egypt and Qatar, brokered largely by Saudi Arabia.