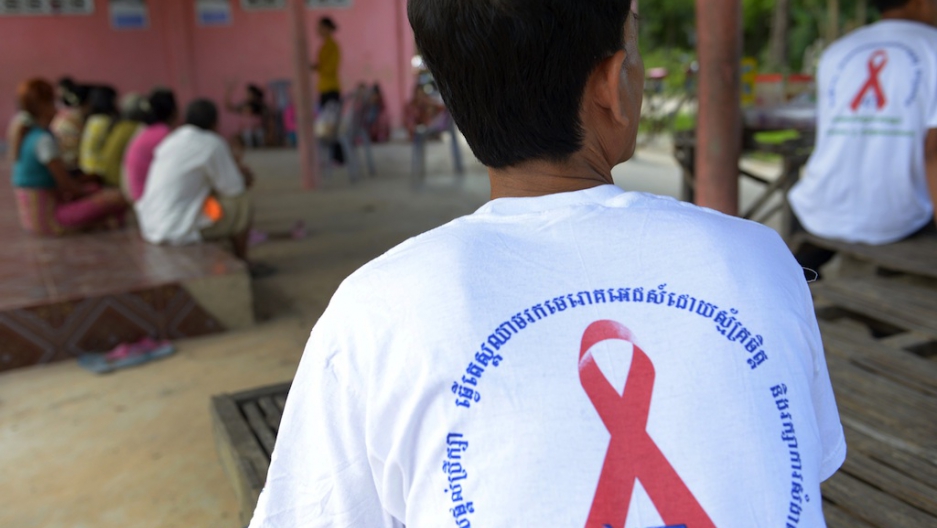 Staff from NGO Partners in Compassion sit during a campaign ahead of World Aids Day in Takeo province, south of Phnom Penh, in 2013. A village in the northern province of Battambang has suffered a mysterious outbreak of HIV in late 2014.
Credit: Tang Chhin Sothy
Share

News update: The World Health Organization and Cambodian Health Ministry announced on Jan 10, 2015 findings that suggest the mass HIV infection of 212 villagers in Rhoka was likely due to contaminated medical equipment. "The study showed that the percentage of people that reported receiving an injection or intravenous infusion as part of their health treatment was significantly higher among the people who tested positive for HIV than the people who were HIV negative," a joint statement said. The village doctor, who admitted to reusing syringes, was charged with murder last month.

The only sign that something is amiss is the growl and crunch of SUVs bobbing and bouncing along narrow dirt tracks. Insignias on their doors identify them as they pass: the Cambodian National AIDs Authority, the World Health Organization, and UNICEF, the UN children’s fund.

Since November, more than 200 people here have been diagnosed with HIV in a sudden outbreak whose source is still unknown. And the number is growing every day.

“So far we have tested 1,700 people out of a population of 2,700,” said Chanrith Prom, who collected data as part of the official investigation into the outbreak. “Two hundred and one have tested positive and a further 170 are suspected to be in the window period,” he continued, referring to the period of time immediately after infection during which the virus that causes AIDS doesn’t show up on tests.

The mystery outbreak in Rhoka is an anomaly in Cambodia — a country much praised for successfully reducing the rate of HIV infection from 2.1 percent of the population in 1999 to 0.4 percent in 2014. By these stats tiny Rhoka now has a rate of infection over 20 times the national average.

And it’s not just sexually active adults who are testing positive. Children, the elderly, and even two celibate Buddhist monks have been found to have the virus. “I couldn’t believe the result,” said Mom Heng, an 82-year-old head monk who tested positive for HIV in December. “I haven’t been with a woman in decades.”

The outbreak is incredibly localized. Only the one village appears to have been affected. “We've tested people from nearby villages but have found very few with HIV,” said Prom.

As soon as the first results started coming in November, fingers immediately pointed at Yem Chrin, the avuncular village doctor. He was arrested for questioning. Battambang’s police chief, Sar Thet, later told the press that Chrin, who is unlicensed, had confessed to routinely reusing syringes. He has been charged and could face a life sentence if convicted.

Chrin has been the village doctor for over 20 years, so most people have been treated by him at some point. But investigators haven't yet ruled out other means of transmission for those testing positive for HIV.

According to a report from the Phnom Penh Post Chrin was a medical volunteer in the Cambodian refugee camps that once sprawled along the Thai border throughout decades of conflict. While there, he received basic medical training. After peace was declared he settled in Rhoka in 1993, where he has been practicing medicine ever since.

The crisis began in November when a 74-year-old man tested positive for the virus. After some of his relatives were also found to be infected, villagers began to head to the local hospital in droves.

“Since the crisis started we’ve had 10-20 people a day coming for tests,” said Chay Charia, a Phnom Penh medic who had been drafted to Battambang to help deal with the influx. “One day there were four vanloads of people to test.”

It's hard to pin down dates of infection for those testing positive. The current investigation hopes to shed some light.

Inside Rhoka village, the people reacted with a resignation born from the trauma of decades of war and subsequent poverty. Here, they’ve learned to expect bad news. Now the infected population faces discrimination and fear from neighbors as well as the difficulty of living with HIV.

“People are prejudiced against those with AIDS," said commune chief Sim Po, a dignified woman in her 50s. "So the commune and local authorities will work to educate the villagers not to discriminate."

“I don’t know if the doctor had training or not,” said Chi Heach, a local grocer who spoke while a squirming infant pawed at her breast. She is awaiting test results. “Whenever I saw him I thought he used clean needles but once I was brought to him unconscious after a traffic accident; perhaps he used an old needle then.”

Heach is not the only villager who saw Chrin tear open packets containing fresh needles. “Maybe [the virus was transmitted through] the medicine he gave out,” she said, and looked away thoughtfully.

It’s possible that the problem wasn’t the needles but the syringes, which must also be changed after each use to avoid spreading disease. Perhaps this is where Chrin’s sketchy training fell short. Indeed, the Cambodia Daily reported that “for every two or three people, [Chrin] used one syringe.”

"We charged him with spreading the HIV virus to others, brutal murder and operating a medical service without a license," Nuon San, the provincial court's chief prosecutor, told Reuters before Christmas.

By all accounts Chrin was well-liked among villagers. He allowed patients to pay with homemade goods and get treatment on credit; he was the most popular doctor in town. Unable to reach him in jail, my translator and I found his family home.

In the doorway stood his son-in-law, Chhem Choeun, shifting from foot to foot. “Right now we can’t go and visit him in jail so we don’t know what will happen until the court rules on his case,” he said. “No one in our family has been diagnosed and we’ve all been tested twice.”

“Sure, I burned his medical supplies,” Choeun said. “But that’s normal; we burn rubbish every month.” Burning trash is common in provincial Cambodia, where there is a limited waste management system. But the burning of Chrin’s medical supplies was very comprehensive and happened shortly after the story broke, leaving investigators little chance of finding evidence.

However, some have cast doubt on the doctor’s culpability. Dr. Edward Mills, a researcher from the British Columbia Centre for Excellence in HIV/AIDS in Canada, told the Phnom Penh Post that reusing needles “would almost certainly not lead to this many infections. … Needles typically run a low risk of infection; the risk is about one in 10,000.” Dr. Mills’ office was closed for Christmas and he could not be reached this week for further comment.

Cambodian Prime Minister Hun Sen was similarly incredulous. At recent speech he said that the high results must be the result of faulty testing equipment. “Is an 80-year-old person infected with AIDS? And are young children infected with AIDS too?” he said in typically bombastic style. “If we were tested using [that hospital equipment], half of us would be infected by AIDS. I still don’t believe it. I don’t believe it.” But he ordered a full investigation anyway.

The results of the investigation are being finalized this week. The hope is that they will shine a scientific light on the cause of the outbreak to help confirm the instinctive Occum’s Razor analysis that the doctor must have done it.

For the villagers of Rhoka the outbreak comes on the back of a long line of misfortune. Last year floods ruined their crops, and this year the patchy and late monsoon rains resulted in low yields.

The village remains beautiful. But between the trees and rice fields is a well of pain that can be glimpsed in the eyes of a young mother holding her child outside the provincial hospital, both now infected with HIV.

Commune chief Sim Po sat on a chair in the red-painted commune hall. The medical center next door was full of worried people. Po's family had been affected, too. “Ten of my family members have been diagnosed,” she said, “including two of my grandchildren who are 6 and 7 years old.” Behind the commune hall, a gang of children played on a bright green patch of grass.

“Right now my task is to help those at risk of committing suicide.”