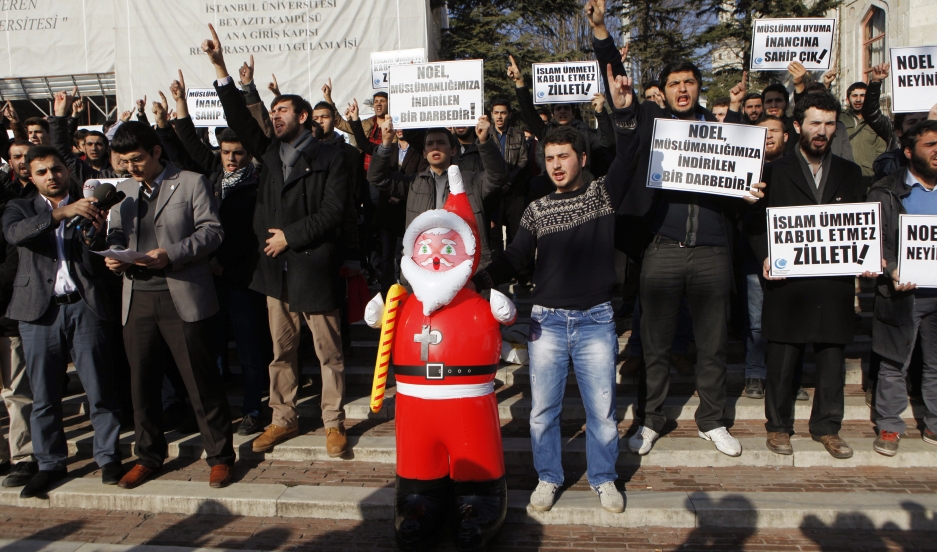 Turkish Islamist protesters shout slogans against Noel celebrations as they hold an inflatable Santa Claus during a demonstration at Beyazit Square in Istanbul December 26, 2013. The sign reads: "Christmas is a blow to our Islamism".

I’ve left the United States for Istanbul for the holidays, and came back to my country of origin, Turkey, a majority Muslim country, but I still can’t avoid Jingle Bells. Or Santa Claus. Or Christmas trees. Or candy cane lights. Or Romani street peddlers hawking Santa hats.

This isn’t Christmas “Xmas,” because it happens without the traditional religious part, and it happens on New Year’s Eve.

Like all good rituals, it is a story of reappropriation. And like most rituals, it’s also a story of polarization, a way of marking us versus them.

But Santa Bear appears to have made peace, however tentative, with something he’s been doing for millenia in this part of the world.

Here, Santa is no mere jolly old man with gifts. He’s a symbol of everything that has torn this country, and this region, for centuries.

But he’s also a peacemaker.

Last year during the holidays, I walked by a mosque where a Turkish nationalist political organization had hung a banner proclaiming that “We don’t belong with Santa who brings gifts at New Year’s Eve.”

Yes, besides being a symbol of political polarization, and rebellion or sell-out depending on your side, he comes to these parts of the world on New Year’s Eve.

In Turkey, Santa is also a jolly old man in a red suit, who rides a reindeer sleigh. No chimneys, though. Istanbul is a land of apartments and high-rises so no chimneys for him to come down. He does bring gifts to place under a duly decorated “New Year’s Eve” tree.

Except sometimes he’s not a fat old man — that part seems not to have caught. I kept encountering fairly thin Santas, which were as jarring as the fact that they were waiting for the New Year’smas.

And, of course, Santa protester proclamations aside, Santa is from this part of the world.

St. Nicholas, who was born in Turkey, was a rich man who is said to have given secret gifts, including money, especially to people in trouble. His most famous act of charity was giving bags of gold coins to a poor family so the three daughters could have a dowry to marry, one bag per daughter. It is said that maybe he threw those bags of gold down the chimney, or put them in the stockings of the daughters who had hung them to dry, so the legend goes. But who knows? But that legend evolved, and merged with other legends, including SinterKlaas of Netherlands, and turned into the recognizable Santa Claus I now see at every other street corner in store windows.

In addition, historians believe Xmas itself is an appropriation of pagan Winter Solstice traditions, including the date of December 25, that go back to a place now in modern Turkey: That date was selected by the council of Nicea, in 4th century AD. Nicea, too is in Turkey: it’s in modern day İznik, a place I knew growing up only as a sleepy town one went to eat and purchase fresh trout. The pagan locals wanted to celebrate the winter solstice festival, called Saturnalia, and hence Christian religious symbolism was merged with a festival of the Winter Solstice.

So, Santa helped make peace between the pagan and Christmas populations by merging rituals and celebrations.

The next twist comes when modern Turkey switched from the lunar-based Muslim calendar to the current Western calendar in 1925. Celebrating New Year’s Eve has had a contested history since. New Year’s Eve came to symbolize the new order, and rejecting it became a rejection of that.

What happened goes back to the uber ritual of it all: gift giving. Contested or not, New Year’s Eve absorbed all the ritual of gift-giving: Santa, sleighs and Jingle Bells.

With the rise of an Islamist government in Turkey, the picture of Santa and Christmas trees became symbols of rebellion: I’ve even seen people decorating them with flags adorned with Turkey’s secular founder, Ataturk.

But regardless of the political polarization, giving gifts is popular — popular because merchants of all stripes like people to buy gifts, of course. Like most commercialized rituals, it is based on something that people enjoy: giving gifts. Hence many malls, even in Islamic neighborhoods, are decorated with recognizable Christmas decorations — though, again, remember, here, they celebrate New Year’s Eve, gifts exchanged on December 31.

But Santa, the rebel, has an uneasy role in it all, and shopping malls in more religious neighborhoods in Istanbul face a dilemma: They want to partake in this ritual, while minimizing the political significance of it all.

Hence, meet the Santa Bear, greeting shoppers in a shopping mall decorated for New Year’smas, where people from all walks of life seem to revel in taking their pictures with this new character.

From a pagan celebration in this part of the world, to a kind local man who believed in giving away his money, and now to a bear to ease the polarization, Santa’s historical role seems to be making peace between rituals, in this birthplace of so many civilizations.