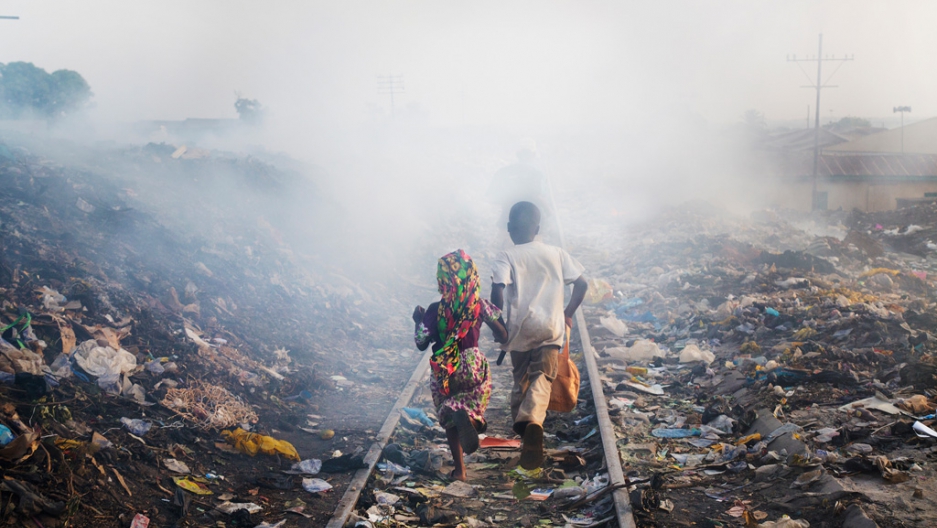 Locals go about their routines, stepping over garbage heaps that burn along the railroad tracks in Kaduna, Nigeria on April 3, 2013.
Credit: Ed Kashi/VII
Share

Sitting in a littered courtyard in the fading light of day, I met a dozen young men who openly admitted to having organized communal violence and killing sprees. I was just outside Kaduna, in Nigeria, Africa’s most populous nation and home to an increasingly murderous struggle between Muslims and Christians.

There was the aptly named “Slaughter,” a 16-year-old Muslim who said his street name came from slitting the throats of Christians “like goats,” as he put it.

And there was Peter, an 18-year old Christian who drew crude pictures of the sadistic weapons he and his friend built to kill “any Muslim we could find” in reprisal raids after their church was fire bombed.

As we come to the end of a particularly brutal year in Nigeria, I think of these two teenagers and the pathology of violence that they — and their communities collectively — are struggling to pull themselves out of.

In 2014 the world took notice of the extraordinary violence unfolding in Nigeria when Islamic militants of Boko Haram kidnapped 276 girls from a boarding school in Borno State. They are still missing.

The world has paid less attention to the steady spate of violence that has continued to surge in the wake of those kidnappings, making 2014 one of the worst years on record for Muslims and Christians alike.

And as I think of these young men and this opaque conflict, one clear question arises: How did this all start?

There’s a long and complex story behind any answer to that question, but one starting point that historians on both sides seem to agree on is the year 1914.

One hundred years ago, as every corner of the globe braced for the upheaval of World War I, Nigeria — then a British colony — was transformed in a way that irreconcilably shaped its history and forged bitter rivalries between a largely Christian South and the predominantly Muslim North.

“For Nigerians, the start of World War I marks the time when the Christian South and Muslim North were forced to live together, and for many people, this is the original sin explaining why the country does not work,” said Darren Kew, a professor at University of Massachusetts, Boston and an expert on Nigeria.

Moses Ochonu, an associate professor of African history at Vanderbilt University, studies the roots of the conflict and maintains that modern Nigeria emerged from the merging of two British colonial territories at the start of World War I.

As Ochonu explains, the merging of the Christian South and the Muslim North occurred mainly because British colonizers desired a contiguous colonial territory stretching from the arid Sahel to the Atlantic Coast. The colonial powers recognized that northern Nigeria was not paying its way while southern Nigeria generated revenue in excess of its administrative expenses.

The answer to that problem was driven by practical administrative sense, with the aim of merging a revenue-challenged territory with a prosperous neighbor, so the latter could subsidize the former.

“The amalgamation was an act of colonial convenience,” as Ochonu wrote earlier this year in an essay for a GlobalPost Special Report on Nigeria’s Christian-Muslim divide.

Northern Nigeria, now fractured into several states and three separate geopolitical blocs, is largely Muslim and traditionally pastoral. It was the center of a pre-colonial Islamic empire called the Sokoto Caliphate. Its Muslim populations, especially those whose ancestors had been part of the caliphate, generally look to the Middle East and the wider Muslim world for solidarity.

The South, an ethnically diverse region containing many states and three distinct geopolitical units, is largely Christian. The major sociopolitical influences there are Western — specifically British — and the customs and traditions are African.

This division was fueled by Nigeria’s oil boom, which deepened the already stark economic inequality in Nigeria. The Christian South controls the Niger River Delta and the oil fields, and the Muslim North is struggling with rising poverty and a growing, mostly unemployed, youth population.

The vast majority of these young people are neither in school nor able to find work. The corruption of the Nigerian government, which has poorly managed the distribution of oil revenues, has fueled resentment in the North.

And it is in this context that the movement of Boko Haram was born, spreading throughout the North as a growing insurgency that is challenging the Nigerian military and tearing at the fabric of the country.

The name is derived from the local word boko, which means “western” or “colonial,” and haram, which is Arabic for “sin” or “blasphemy.” The words Boko Haram, which have become synonymous with fear, are often translated as “western education is blasphemy.”

Boko Haram’s fighters seek to make northern Nigeria an Islamic state. More than 5,000 people have died in the violent insurgency that first erupted in 2009, in the northern city of Maiduguri.

About half of these deaths were caused by Boko Haram attacks on government buildings, churches and schools. But, human rights activists say, the other half were caused by an indiscriminate response by the military and counter-attacks by the police.

As I learned on a reporting trip to Nigeria last fall, it is very difficult to put any face on this struggle. It moves like a destructive and erratic hurricane swirling across the country.

“Slaughter,” a skinny teenager with bad teeth and acne, admitted to being caught in the vortex of all this killing. When I met him he was wearing a polo shirt and shorts, and he drank malted milk. He recounted in detail the years he participated in what could only be described as pathological and sadistic murder.

He talked about how he learned to use a butcher’s knife because his family often slaughters its own goats and chickens, and he put that skill to use in killing Christians.

Candidly, I had a hard time believing some of his story, but the details he provided were confirmed by several interfaith counselors who have worked for many years with young people, including Slaughter, on both sides of the divide.

Christian young people shared their own tales of barbarism that were equally horrific, including the hacking of limbs, the bombings of mosques and murderous street wars. Peter, who wore a large, translucent purple crucifix, drew pictures for me of hand-fashioned weapons he and his friends used, which looked like something out of a medieval torture chamber.

I’ll spare you any more details. But these counselors said “Slaughter” and Peter are both in counseling for trauma and have committed to trying to help end the violence. The counselors asked that their full names not be used and that their organization be left out of the story, because the youth could be arrested by police or targeted by rivals.

Both Slaughter and Peter represent what UMass professor Kew describes as a “lost generation” in Nigeria, part of a surging youth population in which despair turns to violence.

He said that the current news cycle of persistent violence rarely looks at the roots of what is pulling Nigeria apart, but the roots are there.

“So many Nigerians trace the roots of today’s lost generation like Slaughter back to 1914. That’s how they view this as a British decision about states and about lines on the map that have left permanent problems,” said Kew.

“While many Europeans are looking back on this centennial year at the futility of the Great War, there are many Nigerians who are reflecting in a very different way about what 1914 meant,” Kew continued. They “still ask if the ‘mistake’ of 1914 should be undone, and indeed whether it ever could be undone.”