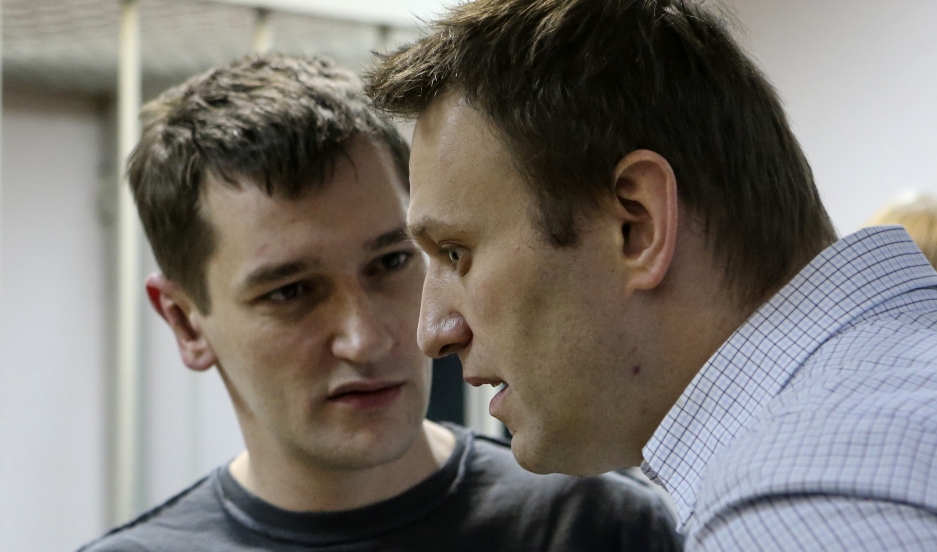 A Russian court ruled on Tuesday to give Kremlin critic Alexei Navalny (right) a suspended sentence for embezzling money, but jailed his brother Oleg (left) for three-and-a-half years in a case seen as part of a campaign to stifle dissent.

Hundreds of Muscovites rallied near the Kremlin on Tuesday to protest Russia's treatment of Alexei Navalny, one of Russia's most prominent opposition figures. Authorities convicted Navalny of fraud and handed him a suspended prison sentence Tuesday.

The verdict wasn't much of a surprise, but what stunned the crowd gathered in a Moscow courtroom was the stiff sentence handed down against Alexei's brother, Oleg: The younger, far less prominent Navalny brother was given three-and-a-half years in jail.

"There was a lot of anger all around," says Masha Eismont, a reporter who was in the courtroom and later watched the protests. "If you are an opposition leader, you understand that you may end up in prison in countries like Russia. But the brother of Alexei, who is someone that had nothing to do with politics, who is the father of two small children — he was kind of taken hostage."

After the sentencing, Alexei Navalny called for his fellow Russians to take to the streets in protest. Although he was supposed to be under house arrest, the elder Navalny tweeted photos of himself on a subway car headed to the rally in Manezhnaya Square in central Moscow.

Russian police arrested him shortly after he emerged.

If Navalny had made it to the rally, his presence might have ignited broader anger. Without him, the protests were relatively small, according to Eismont. That was helped by the scheduling of Navalny's sentencing: Originally slated for mid-January, Russian officials moved the proceedings to right before the start of the biggest holiday on the Russian calendar.

While Navalny’s suspended sentence of three-and-a-half years essentially keeps him sidelined from Russian politics, his brother's sentence functions as a shackle. "There’s the kind of pressure on him now that his brother will be inside the Russian prison system, where the authorities can put a lot of pressure [on his brother],” says Moscow-based reporter Charles Maynes.

If you’re starting to think that this all feels like a throwback to the Soviet era, Maynes says you wouldn’t be far off-base.

“It’s no doubt that this is an intimidation tactic," he says, "the idea that if you participate in politics, if you go against the current thinking, that you risk not only yourself but your family now."

“That looked pretty flimsy going in, but the case ground forward, which again was a symbol that this was a politically motivated case from the beginning,” Maynes says.

Political opposition in Russia has been largely muted in 2014, with crackdowns on activists and the shuttering of many independent media outlets. So are Tuesday's protests a sign of the tides turning?

What is certain is how much different the Russian government position is now at the end of 2014 than it was at the start of the year.

“You back up and think about the Sochi Olympics beginning the year and Russia really looking strong, and then this Crimea crisis happens and suddenly you’ve got the economy in a tailspin over oil and sanctions, you’ve got this fear of opposition members, this obsession with Navalny and what he can do to the authorities," Maynes says.

With those troubles in mind, the Kremlin will be keeping a close eye on how Russians react to this latest news.