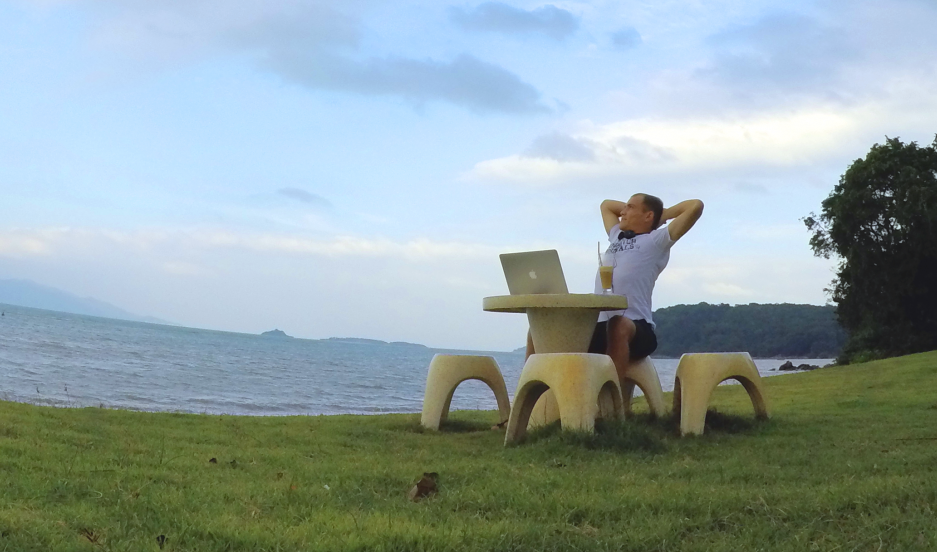 Igor Pidkoshani is a Ukrainian engineer who couldn't do his job in eastern Ukraine anymore. So his bosses in the San Francisco Bay area helped him set up temporary shop in Thailand.

Having raised $2 million dollars, they felt like they were off to a great start — until it came time to hire software engineers. “They cost a ton of money,” Soroker says, “so you don’t have a lot of room for making a mistake."

And there was something else — with so many companies hiring in the Bay Area, engineers know they can always find another job.

“When you’re building a complicated product and you’re in the early stages, it’s not all an easy ride,” Hizalev says. “There are hard moments and when people aren’t dedicated to actually overcome those moments, it’s sort of hard to maintain a good team.”

So they turned to a familiar source for help — their home countries. Soroker immigrated to the US from Siberia when he was 14, and Hizalev, originally from the western Ukrainian city of Lviv, came here when he was 21.

“We speak, read and write Russian, so I started just posting ads on various Russian start-up websites,” Soroker says. They ended up hiring a team spread across Russia and Ukraine. Instead of a loft in San Francisco with bean bag chairs and artisanal coffee, they got themselves a $600 office in Oakland, an Internet connection and got to work.

That was in the spring of last year. Then the conflict in eastern Ukraine broke out. Suddenly, instead of debating the merits of their new authentication mechanism with their employees, they found themselves discussing cucumbers.

“They would tell us that the price for cucumbers all of the sudden went up by 100 percent, that you can’t find any food in stores. There are no vegetables,” Soroker says. “And I remember this. I remember going to a store in 1990 in Novosibirsk and all I can see is just shelves and shelves of canned seaweed, and that’s it.”

Soroker and Hizalev noticed that one employee in particular wasn’t producing. “Things really started going wrong for us when Igor was not able to work anymore,” Soroker says. “That’s when we started to get worried.”

Igor Pidkoshani was based in the southern Ukrainian town of Meshkovo-Pogorelovo, less than 50 miles from the fighting in Mariupol. It was clear he needed to get out of Ukraine, but Soroker and Hizalev thought it would be hard to get Igor an H1B visa, the one for high-skilled workers, to bring him to the US.

They suggested an alternative: “Just figure out where you can go,” Soroker says they told him. “Don’t worry about not getting paid or taking time off.”

With the US out of the picture, where does a talented Ukrainian engineer go? The answer was Thailand, where it’s relatively easy to get a visa. It was quite a change for a guy who’s never left his own country.

When I chatted with Igor via Skype, I asked what the tipping point was for him — Russian tanks rolling in to Meshkovo-Pogorelovo? Lack of cucumbers?

It seems Igor’s main problem was just the news. Nothing terrible happened to him, he says, but all the uncertainty and dire predictions about a possible war? All of that really winds you up. He felt like he was stewing in an “informational kasha,” endlessly debating events he was powerless to control. His concentration was shot.

Hizalev, who lived through the Soviet Union’s tumultuous perestroika era in the late 1980s, remembers the feeling.

“Everything work-related becomes a second priority," he says. "You’re sort of looking for, you know, what I do with my life now? Should I leave? Should I go fight? What should I do? And I can totally relate to that. It’s really, really a hard point."

But it’s also a hard point for Kato, Hizalev and Soroker's company. All their employees now want to leave, so their experiment in outsourcing is becoming an adventure in insourcing.

Hizalev and Soroker helped one engineer get to Oakland on a J1 trainee visa. The question is what happens to Kato’s bottom line if all their cost-saving eastern European employees end up in the US.

“We wouldn’t be able to pay them right now,” says Soroker, with a laugh. But he quickly adds, “Cost is only a part of the problem. A bigger problem is really finding the right people. Cost you can usually resolve. You can raise more money. You can make more money.”

What you can’t generate as easily is commitment — which runs both ways, as Soroker and Hizalev's new unofficial role as immigration experts demonstrates.

As for Igor, adjusting to life in Thailand has been a process. He loves the weather; the food, not so much. Recently, in a fit of nostalgia, he sought out a Russian restaurant. “I couldn’t take it,” he tells me. “I needed some borscht.”