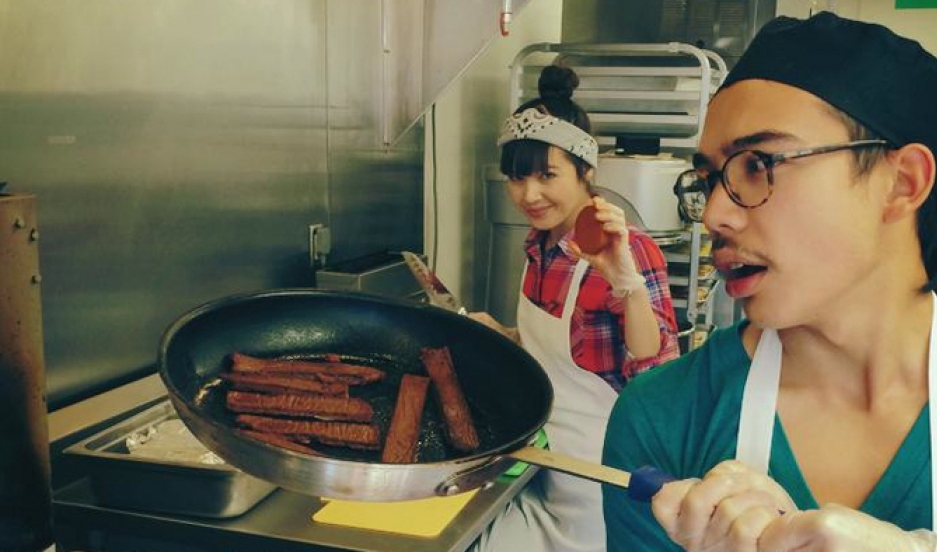 Kale Walch cooks a pan of "bacon," one of the meatless meats that he and his sister Aubry Walch whip up for The Herbivorous Butcher. They're hoping to open what they say is the world's first vegan butcher shop in the spring.

Aubry Walch grew up on Guam and moved with her family to Minnesota when she was a teenager. Her memories of the island include the tropical temperatures, the fiestas and a dinner table filled with five different kinds of meat.

“I didn’t eat my first vegetable until I was 10,” Aubry says. “I got a cold cut combo salad and that was first piece of lettuce I’d ever eaten in my life.”

By the time she turned 18, however, she’d become a strict vegetarian. And her younger brother, Kale, is now a vegan. Yes, Kale is his real name, but he wasn’t named after the vegetable. Kale wasn’t even available on Guam at the time, so the family had no idea what it was until they saw it in the produce aisle in Minnesota.

Both siblings stopped eating meat in their late teens, but their choice was motivated by environmental and ethical reasons, not because they didn’t like the taste. They missed meat so much that they set out to try to make vegan alternatives for their favorites. The first recipe they perfected was bologna.

“Growing up, one of my favorite foods was bologna and rice,” Kale says. “My dad would pan fry bologna with fried rice and I really missed that. So bologna was the first thing I made when I went vegan.”

Vegan bologna turned out to be just the beginning. The siblings now sell a wide variety of “meatless meats” at Minneapolis farmers markets: ribs, salami, bacon, pepperoni, hot dogs, beer brats, pulled pork, Italian sausage, teriyaki beef jerky and more. Their business is called The Herbivorous Butcher, and they sell out every week — even the bologna.

“We tell everyone: this is the only bologna in the world where you actually know what’s going in,” Kale says.

Their meatless meats are made with vital wheat gluten, assorted spices and different ingredients to mimic the texture and taste of real meat — pinto beans and sun-dried tomatoes for Italian sausage, pineapple juice for ham.

The meat they have yet to perfect, though, is Spam. It’s something of a white whale for the pair. 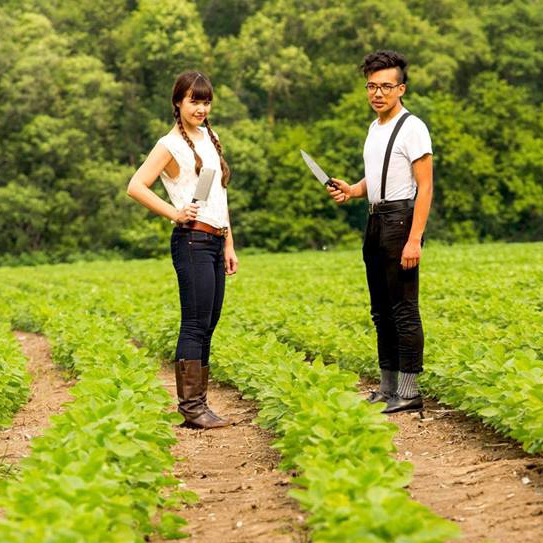 Spam is a big favorite on Guam. It’s estimated that the average Guamanian consumes 16 cans of Spam per year. US troops first brought the canned meat to the Pacific island during World War II, and the indigenous population, the Chamarro, incorporated it into many of their dishes. It’s even available at McDonald’s on Guam. Spam is also ever-present in Minnesota, home of Spam Town, USA — Austin, Minnesota, where Hormel is headquartered.

“The flavor’s really good,” says Aubry. “It tastes like Spam, but the texture isn’t right yet.

“I'm super anxious to do it because I want to make Spam Misubi, the sushi roll with Spam and seaweed. On Guam, they sell it in 7-11 and at the gas station and I miss it so much, so we’re working on it. We’re totally going to make Guam proud and make Spam that’s vegan.”

Their extended family back on Guam supports them, though it took awhile for their grandmother to understand what being a vegetarian really entails. When Aubry went back to Guam to visit, her grandmother offered to make her pork — then chicken, then ribs and finally fish, before giving up and serving her rice.

In Minnesota, their meatless meats have proven so popular the siblings plan to open a storefront for The Herbivorous Butcher this spring, making it what’s probably the world’s first vegan butcher shop.

And if all goes to plan, they will have SPAM mastered by then.