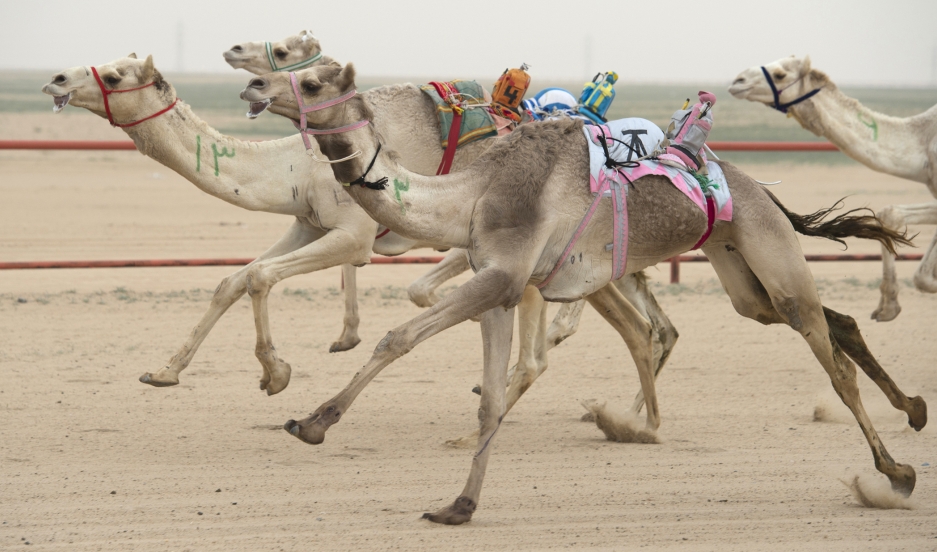 Camels ridden by robot jockeys compete during a weekly camel race at the Kuwait Camel Racing club in Kebd January 26, 2013. The robots are controlled by trainers, who follow the animals in vehicles.

Imagine a DeWalt drill body. Now covere it in brightly colored silk. Finally, picture a crude plastic whip attached to the drill and then put the whole contraption on top of a camel.

Camel racing is a centuries-old cultural tradition across the Arabian peninsula. But it's taken on more modern trappings over the past 30 or 40 years, Borden says.

“It became significantly more popular as a formalized sport in the United Arab Emirates. They built racetracks with grandstands and a lot of the things you might see in a horse racing track in America,” Borden adds.

The use of robots as jockeys however is an even more recent phenomenon.

“In the beginning, they were oftentimes using children from other countries — like Pakistan and Sudan, as young as 2 or 3 years old — because they were so light. And, obviously, from a human rights perspective, it was terrible,” Borden says.

The practice of using children was finally outlawed, he says, about 10 years ago. Then robots became the new jockeys.

Camels ridden by mechanical robots race to the finish during a six kilometer race at the 12th International Camel Race in Kebd February 14, 2012. According to organizers, camel jockeys were replaced by mechanical robots since 2005 due to international pressure because camel owners were found to be involved in human trafficking, buying children from countries like Pakistan and India for their smaller frame and lighter weight to ride on the camels. Since the ban on human jockeys, owners have continued to race their camels, controlling the whip with their remotes as they follow the race trackside in their jeeps.

“They’re using these tiny robots fashioned from pretty much anything you can find in a hardware store: A drill, a car remote entry clicker, a long piece of plastic to be a whip,” Borden explains.

He says the robots are extremely lightweight and inexpensive; they cost a couple hundred dollars and are also equipped with a radio, so the trainer can talk with his camel throughout the race.

“The owner of each camel will ride along the side of the track in a car and can talk to the camel. They make a sound that the camel will recognize so that it will be inspired to run faster. So they have the button from the keyless entry clicker to do the whip and also a walkee talkee so they can talk to the camel.  So, yeah, it’s not a robot like C3PO or anything, but it has that mechanical look to it,” Borden says.

At one recent race, not many fans come out to the race track; it’s mainly just trainers, camel owners and people involved in the sport. But TV ratings are quite high. The entire event takes place in the early morning hours, between 7 a.m. and 9 a.m., before the heat of the desert makes racing impossible.

“When you talk about sports in that part of the world — especially in Dubai or Qatar, where they’ve really been making a concerted effort to become a destination for western sports — a lot of it is based around the idea that they want outsiders to be a part of their sporting culture. Camel racing is, in a lot of ways, one of the few, still only for the Emiratis, only for the people in the Arabian region. It’s not a sport where you see a lot of ex-pat owners running camels,” Borden adds.