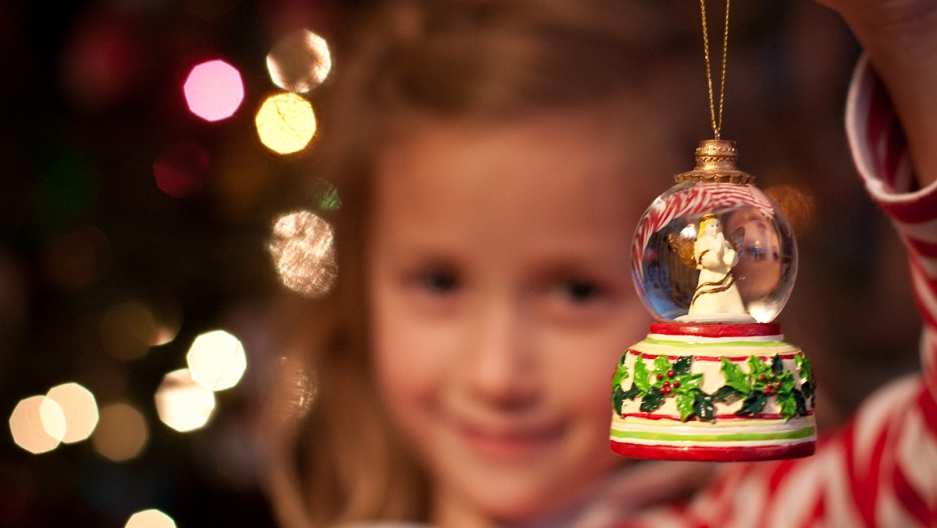 A girl holds a snowglobe Christmas ornament in front of her family's tree. Some non-Christian families have adopted trees and other Christmas traditions.

It's over: We've all survived another season of endless Christmas TV specials and nonstop Christmas music, not to mention the shopping. So for the non-Christian families of America, how did they get through the Christmas season while making sure their kids were okay without Santa and sparkly trees?

“We tend to be very honest with our kids,” says Fatima Ashraf, who's Muslim. “My husband, Ibrahim, talks to them incessantly about our own traditions — he’s the storyteller. He also tells them the story of Christmas — the real story and the commercialized story — every version that he knows himself. And then he tells them the Muslim story and all the versions of that one.”

Ashraf says that her husband tries to ensure that their children are familiar with the multiple different faith and cultural traditions that often appear in American society. But it's not actually the dominance of a Christian holiday that bothers her.

“My role in all of this is to minimize their exposure to the consumerist aspect of Christmas,” she says. “To be totally honest, that’s what I’m most concerned with.”

“My wife is Hindu and I’m Jewish, so we really just share stories about each of our religions, and the same with Christmas,” he says. “We talk about how everyone believes different things, and we try to limit the gift giving and not make that the focus of the holiday.”

Though many non-Christians introduce a Christmas tree into their homes during the holiday season, Winter says his family sticks to a menorah for the Hanukkah festival. “We have some snowflakes up, but we don’t have lights, trees or any of those ornaments,” he says.

But even though Winter and his family eliminates the Christmas decorations, he says his young ones often still focus on the glitz and glam of the Christian holiday. They even get a taste of it from their relatives."

“My in-laws are actually immigrants to this country — they came about 40 years ago — and they’ve taken up Christmas as an American holiday," Winter says. "We go visit their house every Christmas Eve — they put up a fake tree and lights in their house and give gifts the next morning, but it’s not under the pretense that it’s religious in any way.”

Fatima Ashraf's family, who are also immigrants, have done the same.

“It’s interesting for Muslims. Eid is our holiday, and it’s quickly going down the same road,” she says. “Our kids say, ‘We want presents too, we want lights too,’ and we want to be able to commemorate our traditions in this special way. So a lot of my friends and family members are doing the lights, the gift giving and that kind of thing on Eid as well.”

Ashraf says her hesitance to adopt Christmas traditions shouldn't be taken as a sign of the so-called “War on Christmas,” a topic often covered by American cable news networks. “It’s do as you wish,” she says. “I was raised to accept everyone’s traditions and to let everyone do as they wish around their own holidays.”

Ashraf says that her mother used to wish their neighbors a Merry Christmas, adding that she would also buy them Christmas presents out of a sign of respect for their faith and traditions. “She really respected everybody for their holiday,” Ashraf says. “When it came time for our holidays, it was more educate, educate, educate.”