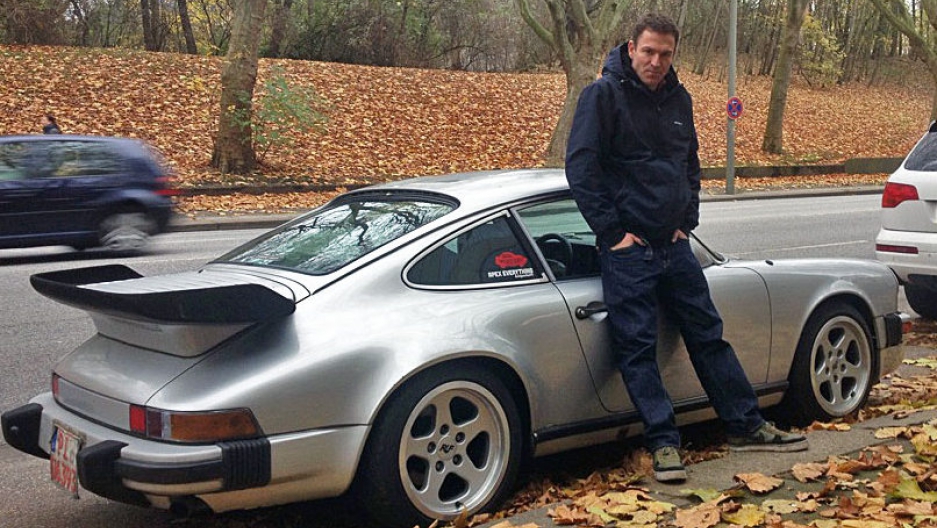 Matthias Hoeing wants to smash the conservative image of most Porsche rebuilders: “To them it's sacrilege, but I don't care.”
Credit: Timo Geilert
Share

As a machine tool whirs in the background inside his workshop, he raises the cuff of his sweatshirt to reveal a forearm “sleeved” by red and green tattoo ink.

“I grew up with skateboarding and rap music and punk rock and American cars,” the 40-year-old mechanics guru says. “That's the kind of stuff that influences me.”

As a veteran racecar engine builder, however, Hoeing has the technical chops to realize his drive to bring California hot-rod culture to Germany's staid community of Porsche afficionados.

With its reputation for clockwork precision, special certification programs for “authorized” mechanics and pricetags upward of $50,000, Porsche likes to present its cars as unimprovable.

Most Germans who drive and restore classic models have always approached their cars more like museum curators than motorheads. But Hoeing wants to smash that conservative image, whatever the old-school collectors or brand stewards may say.

Hoeing cut his teeth building racing engines for Hamburg-based manufacturer Thielert in 1998 before moving to southern California in 2001 to work for Porsche Motorsport, the Stuttgart-based automaker's racing team.

Then he met Magnus Walker, a British Porsche restorer who has brought the rocker hair, tattoos and wild designs of the custom car scene to California Porsche fans for the past 20 years.

“In Germany, I was building Porsche engines,” Hoeing says. “But I had no desire to get into the Porsche scene because to me it was dentists and lawyers and people who drive their preppy cars to the ice cream parlor.”

Since he returned to Hamburg in 2008, Hoeing's supercharged engines have been clawing out a foothold for the muscle car in Germany's Porsche world.

Although the Southern California aesthetic for body styling has yet to take off, the growing popularity of hot rodding and so-called “custom culture” suggests he may have picked the right moment.

Hot rods, tattoos, low-riders and choppers have made a dramatic leap in popularity during the past decade and a half, says 44-year-old Michael Perrech, who started organizing the “Kustom Kulture Forever” exhibition in Herten, Germany, 13 years ago.

“It was very hard in the early years because hot rods weren't very popular,” he says. “Now we're at the point that companies like [workwear maker] Dickies come to us about sponsorships.”

Hot rodding is especially big in the former East Germany, where groups like Hot Heads East embrace Rockabilly and American cars — perhaps a reaction to the political repression and 18-horsepower, recycled-plastic vehicles that were the specialty of the German Democratic Republic.

At least one company, Sour Krauts, has created a “motowear” brand featuring helmeted skulls, gothic script and slogans in the vein of “Trust me: I have a beard.”

But a huge gulf remains between the hot rod world of facial hair, tattoos and ducktail haircuts and big brands like Audi, BMW, Mercedes-Benz and Porsche, Perrech says.

“They don't really get hot rodding,” he says. “Everything has to be strict and on the point.”

Hoeing says he's an engine builder, not a car builder, and the high price of admission — one of his rebuilt engines runs $25,000 to $60,000 — means Porsches will never outstrip Fords in Germany's custom car scene. But with his engines providing the muscle and his image setting the tone, the gulf may be set to shrink.

Touted by Walker as the best Porsche engine builder in Europe, Hoeing had more business than he could handle before he teamed up with his business partner Torsten Hanenkamp last year. Their six-man workshop's engine business is now growing fast on the strength of bread-and-butter rebuilds that coax 380 horsepower from a standard 3.6 liter, 250-horsepower Porsche 911.

Their Mezgerwerk brand — named after Hans Mezger, sometimes called the greatest engine designer of all time — has all the right ingredients to become a cult hit like West Coast Customs, the team behind MTV's “Pimp My Ride,” and Orange County Choppers.

Hoeing says his business is already diversifying. “I get emails from people who want to buy T-shirts or sweatshirts every day.”