For many veterans, tattoos are a way to mark their service and share wartime experiences that are often hard to put in words. "The warfighter culture itself does not allow for a lot of expressiveness or emotionality," says veteran Jason Dietch. "Tattooing has become a secondary language of expression,”

Deitch and his friend, Chris Brown, have collected some of the stories behind veterans' tattoos for the website War Ink, which hopes to help civilians understand veterans  — and the wars they fought — through their body art. 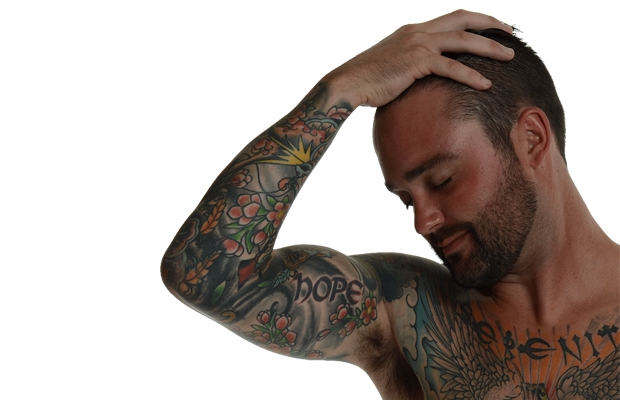 Jeff Slater's tattoos record the story of his time in the Army.

“There’s no public discourse about the experience [veterans] are having at war going on in America," Deitch says. "And we realize that these veterans and their tattoos represented a clear and authentic story from war."

Veteran Jeff Slater has the word “serenity” tattooed across his chest, below his collar bone, though the rest of his body is anything but serene. It's full of colors and images, like a hand grenade with wings.

“I always knew I wanted a hand grenade with wings," Slater says. "To me that described who I am in this world ... I feel like that guy with the grenade with the pin pulled. You never know when it’s going to go off, but eventually it does. And the wings were supposed to mean my journey through this world."

Each piece of his art is equally meaningful. "I don’t know who said it, but someone said, ‘Serenity is not freedom from the storm, yet it is peace amid the storm.’ And that’s how I feel my life is. It’s not going to be perfect and it’s going to be battle after battle after battle,” Slater says. He also has the words “hope” and “faith” tattooed on his arms.

“For Jeff, he is tyring to instill a change in himself through that art," Deitch explains. "What he’s hoping for, and has faith in, is his ability to recreate himself as somebody new who isn’t only affected by his experiences at war."

Noah Bailey has a couple of tattoos that are a record of the incident in Afghanistan that took both of his legs. 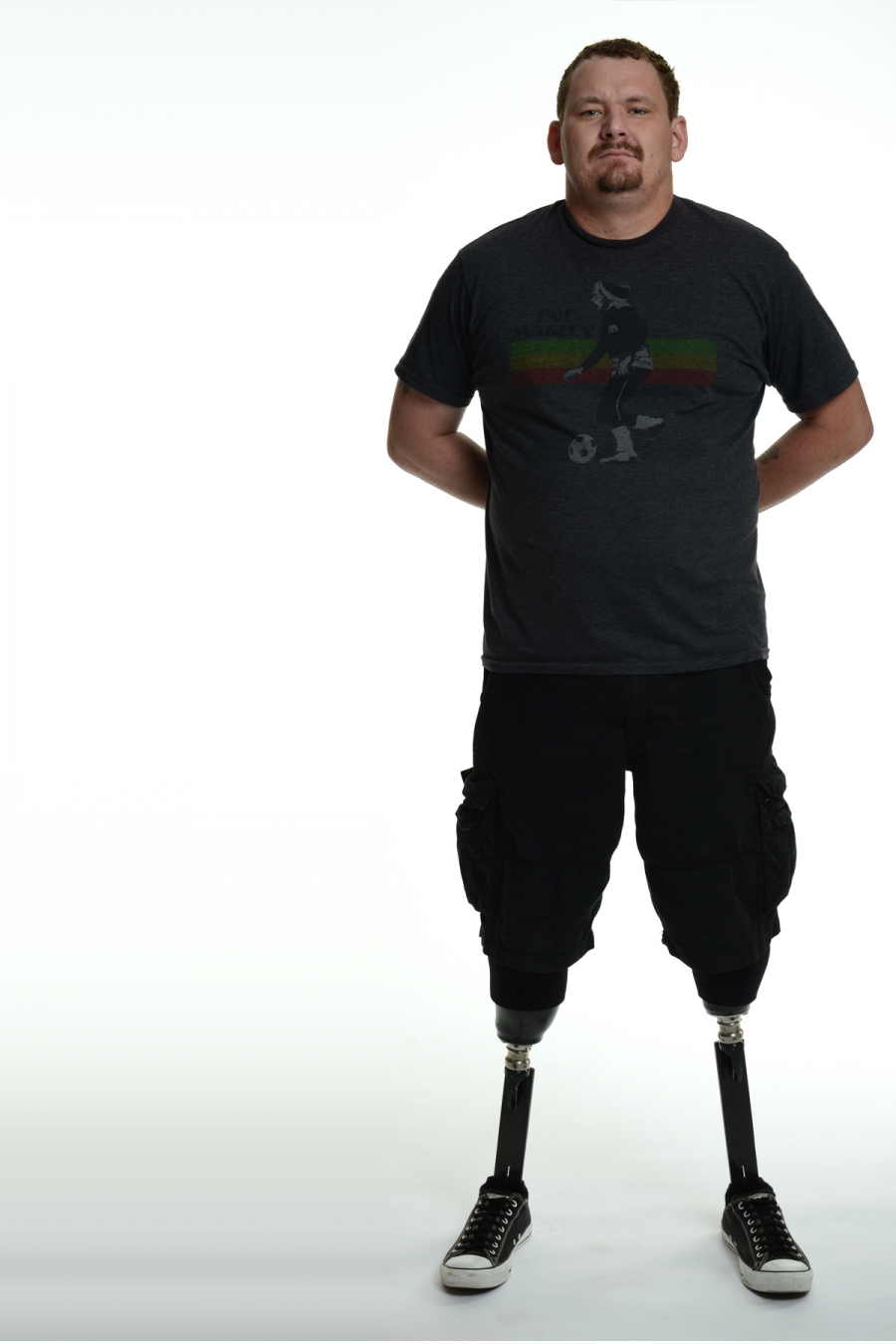 The dark humor in Bailey’s tattoo is a cornerstone of veteran culture, Deitsch says.

“Yes, he’s lost both of his legs, but that doesn’t mean that his life is over," he says. "In a very darkly comedic way, he has a picture of his Chuck Taylors — which, by the way, every shoe that he owns now on his prosthetic legs are Chuck Taylors."

Deitch believes the tattoos are not only symbolic for the veterans themselves, but also a way to raise questions in the minds of friends, family members and others who haven’t experienced war — even if it's only done subconsciously.

“They’re a record that, whether it was overtly conscious on a veteran’s behalf or not, they put on their bodies where other people could see them," Deitch says. "It’s a request. I think there’s a lot to be said for the conversations that could be had by asking about those stories. It’s a safe format for discussing what seems to be a very fraught conversation."

Members of our SMS community of veterans have been sending in reflections on their own military ink. Here are some of our favorite responses:

David Swoyer, Florida: "It may not look like much, but the faded tiny dot on the side of my index finger just above the thumbnail is a significant tattoo. I am a Vietnam veteran. The dot was self-inflicted. I was on a forward fire base. As I was using an India ink pen to annotate the colonel's maps for the day's maneuvers, the 155(-millimeter) gun emplacement behind my metal connex storage unit/map drawing office went off. I stabbed myself with the ink-loaded pen. Once the bruise healed the mark remained. It became a memory point to think about my experience and remember the friends I lost in what still seems like a useless war." 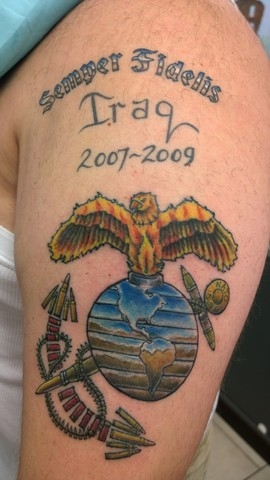 A tattoo commemorating a Marine's service in Iraq.

Courtesy of an anonymous PRI listener

Duke Omara, Buffalo, New York: "A buddy had a directive which outlined new restrictive tattoo regulations inked on his butt cheek to show his disapproval of the new rules."

Jared Johnson, Denver, Colorado: "It says "He who dies in the name of freedom shall always be my brother.' My idea was that I didn't want my tattoo just to represent only Americans, because we saw so many people dying in order for others to live better lives. I got it the day before I was deployed to Iraq for the second time. I was in the 82nd Airborne Division as an infantryman."

Cristina Leon Guerrero, Tacoma, Washington: "My tattoo represents my 20-year Army service — the poppies, the bittersweet beauty in Afghanistan and my home state of California."

Tyler Marriott, Portland, Oregon: "No tattoos! I was in the navy — Vietnam. I was deathly afraid of going on liberty, others getting me drunk and waking up tattooed! Therefore the very fact I don't have a tattoo says a lot about my experience! I seldom went on liberty with anyone."