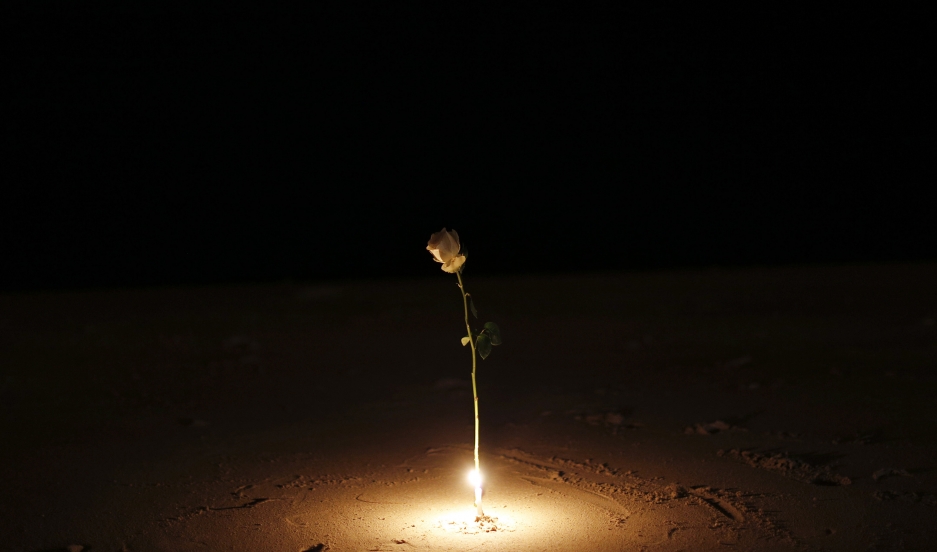 A rose is lit by a candle as survivors, local residents and visitors gather for a ceremony for victims of the 2004 tsunami in Ban Nam Khem, a fishing village destroyed by the wave. Survivors of Asia's 2004 tsunami and relatives of its 226,000 victims cried and prayed as they gathered along Indian Ocean shorelines on Friday for memorials to mark the 10th anniversary.

A lot of people around the world today are looking at a video circulating on Facebook comprised of before and after shots from the 2004 Indian Ocean tsunami. Ten years ago, a 9.1 magnitude earthquake sent massive waves plowing through a dozen countries, including hard-hit Indonesia as well as Thailand, India and Sri Lanka.

The water tossed around boats and houses — anything in its path really — as if they were toys. Nearly a quarter million people died. More than a million more were made homeless. It's one of the worst natural disasters ever.

But a lot has gotten better in the past 10 years. See for yourself:

One of the people who survived the tsunami was Dr. Vinya Ariyaratne, who lives in Sri Lanka. Immediately after the waves hit, he raced down to the shoreline to help.

He says he'll never be able to forget that day.

"The houses were completeluy destroyed — the ones that were closest to the beach," he says. "There were many bodies lying around. People were traumatized. They had gathered in temples, churches and public places. We were also traumatized by what we saw."

But you could quickly tell that while the destruction was total, it was highly localized. Things were vastly different a short drive away.

"It affected maybe 200 meters (650 feet) onto land. But everthing beyond that point was normal. So people could actually go and help," he says. "There was what we call a wave of compassion to counter the waves of destruction. People collected whatever they could collect and went and shared with the people who were affected. That was really a key part that helped to try and make things normal."

While things got back to some semblance of normal quickly, they weren't always done properly. The rebuild was fast and, he says, at times sloppy.

"There was so much money that was coming to so many international organizations. They were under pressure to sprint. So we have seen now in the newspaper reports that after 10 years, some [rebuilt] houses have collapsed because they were done in such a hurry. The materials used were not of high quality," he explains.

But the hardest part about those days after the tsunami may not have been the property discussion, but the human toll. He says he'll always remember the children orphaned by the tsunami.

"It wasn't a large number. But the most striking thing in my memory, because I also have two children, was when I saw the orphaned children," he says. "At that time, we didn't even know if they were orphans, or we couldn't trace their parents. That was really affecting us emotionally. This type of finding children who were looking for their parents or parents looking for their children who were lost ... it is one of the things that I will never forget."