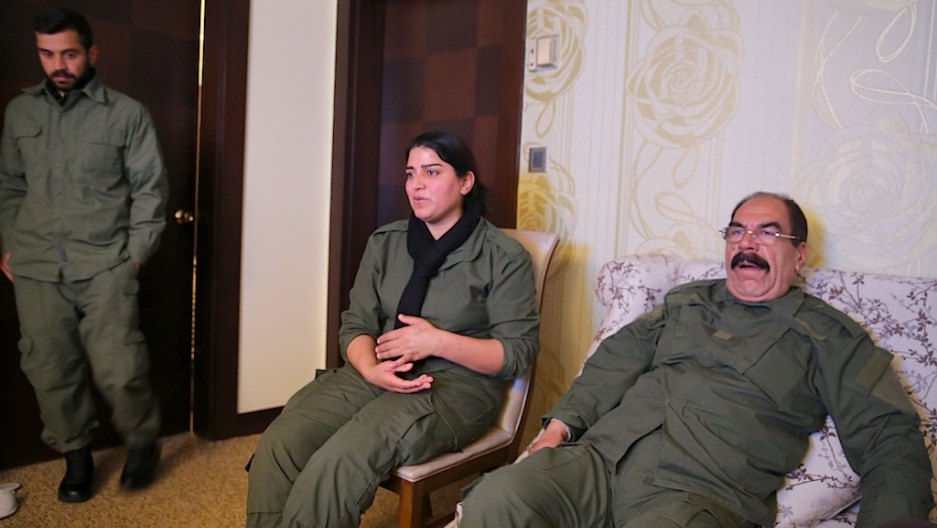 Husband and wife Qassim Shasho and Harbiya Hassan talk about their fight against the Islamic State as Shasho's nephew walks past.
Credit: Tracey Shelton
Share

DUHOK, Iraq — Harbiya Hassan learned how to shoot when she was just 10 years old. Growing up in the treacherous environment of Iraq’s Sinjar district, her father thought she should know how to defend herself.

For centuries, the Yazidi community that lives there has been persecuted and attacked by their neighbors for their ancient and misunderstood beliefs. But when Harbiya’s father taught the now 32-year-old to fire a rifle all those years ago, it’s doubtful he pictured his daughter where she is now: in the forefront of a guerilla fight against a brutal and expanding Islamic State (IS) that recently set out on a campaign to wipe the Yazidi community off the map.

On Aug. 3, IS overran the villages of Sinjar, killing or kidnapping thousands of men and sexually enslaving an estimated 5,000 women. Around 380,000 Yazidis were displaced in the process, with many running to the mountains of Sinjar, where Harbiya now assists in defending what remains of her people.

“It’s been four months and eight days,” she said earlier this month from a hotel room in Duhok, on the first break she has taken from her mountain post since the IS takeover. “From the first day we fled to the mountains I joined the fighting to defend our homes, our land and our people.”

Harbiya fights alongside her husband Qassim Shasho, a veteran peshmerga fighter who became a household name among Iraq’s minorities when he began leading what is now a 2,000-strong Yazidi militia force against IS. Despite the legends now spreading of his military prowess, Shasho is quick to point out he does not lead these men alone.

“I want to be clear that I am not the leader of this whole effort, but rather we are brothers working together to free our people,” he said.

Shasho commands 500 men in one of three main groups defending different parts of the mountain. Supporting them in their fight are around 1,000 Kurdish peshmerga fighters. Other areas of Mount Sinjar are controlled by Turkish and Syrian Kurdish militias.

Harbiya said the first eight days of fighting were intense, with many close calls. Weapons, ammunition and even food and water were in dangerously low supply in the days before US aid drops to the besieged mountain began. Tens of thousands of fleeing sick and dehydrated civilians needed protection.

So she picked up a weapon.

“I looked at the men heading out to fight and I said to myself, ‘They’re not better than me,’” said Harbiya. “I can fire a Kalashnikov as straight as any of them. So I got the guts to do it.”

After the first week and a half, the fighting eased somewhat. But the couple said their area has suffered 12 major attacks by IS in recent months. Each time they have managed to hold off their attackers — but alone, the odds were never in their favor. They faced a well-armed and mobile enemy while the majority of their vehicles lay dormant, with no fuel to power them.

Last week it was their turn to fight back. Backed by local peshmerga reinforcements and international air support, Shasho and his men made an all-out push to take back the villages of Sinjar. Fierce fighting continues, but already, Shasho says, they have regained many villages and secured a land route into the mountains for the first time since the August siege began.

Taking their rest in preparation for the big fight, the couple sat in their hotel room suite. Harbiya explained that they always enter battle together, fighting side by side. Shasho praised his wife's bravery, then added with a playful laugh, “She couldn’t do it without me.”

The front-line fight has become a real family affair for Shasho. Harbiya is not his first wife. He has two other spouses and twelve sons back in Germany, where he spent much of his time prior to the rise of IS, also know as ISIS or ISIL. Five of those sons and one of his nephews have also left their comfortable lives in Europe to fight on the mountaintop with their father and stepmother.

Over these past four months, this family-led militia group has managed to save thousands of civilians, protect the sacred Yazidi temple of Sharfadin, and gain back several Yazidi villages. Shasho said they have also assisted in the rescue of around 100 Yazidi women from IS hands.

“Some of the girls escape alone and manage to call their families or make their way to the mountains on foot,” Shasho said. “Other times, IS members contact us directly to assist in the release of women. We also pay smugglers operating within the Islamic State to get our girls out.”

More from GlobalPost: Thousands of Yazidi girls and women are still held by the Islamic State

Shasho said there are many good people living within IS territory who are willing to help. Even some Arab families who support IS but are appalled by the systematic sale and rape of Yazidi girls have done much to help.

He admits that some of the people offering help are just looking out for their own interests. When they make contact with the militia, they ask for future protection for their families in exchange for providing help.

“If anyone helps even one of our women to return, I give them my word I will do all I can to protect them when IS falls,” the commander says.

Harbiya said she is not afraid to die. Her fears lie more with the fate of the thousands of women still held by IS.

“Sinjar has always been a dangerous place,” she said. “We have always been under attack from all directions. All we need is a secure zone where we can live our lives in peace.” But for peace to prevail, she said, the Yazidis need sustained foreign support to drive out IS.

Until that is accomplished, Shasho, Habiyeh and their extended family have vowed to keep fighting to protect their people.