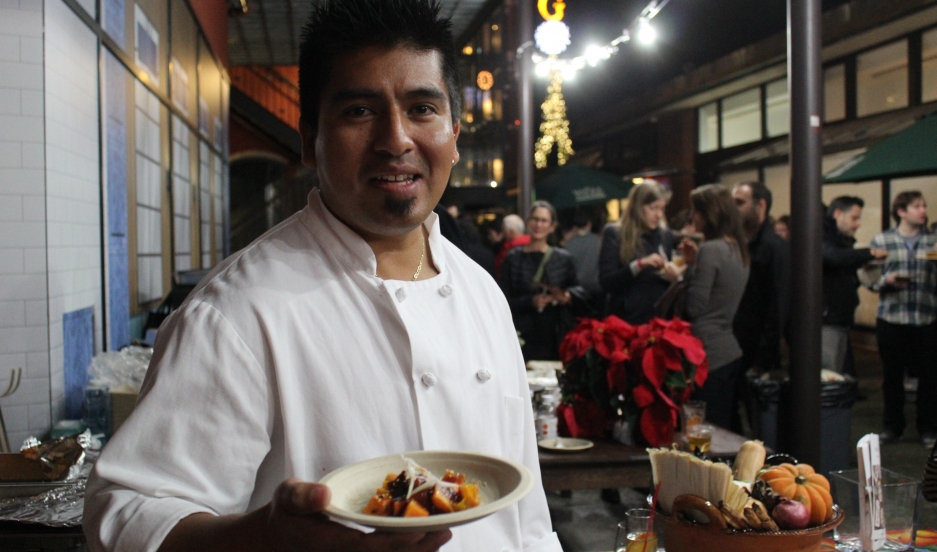 I still remember the first time I tried mole, the famed Mexican sauce. So when I heard about a whole evening dedicated to mole in San Francisco, I had to check it out.

I headed out and arrived at a large outdoor patio in Ghirardelli Square, where about a dozen varieties of mole were on display. They were prepared by masters like Adriana Lahl, who's from Mexico City and has lived in the US for the past two decades. She has focused on gourmet food and seasonings for years. 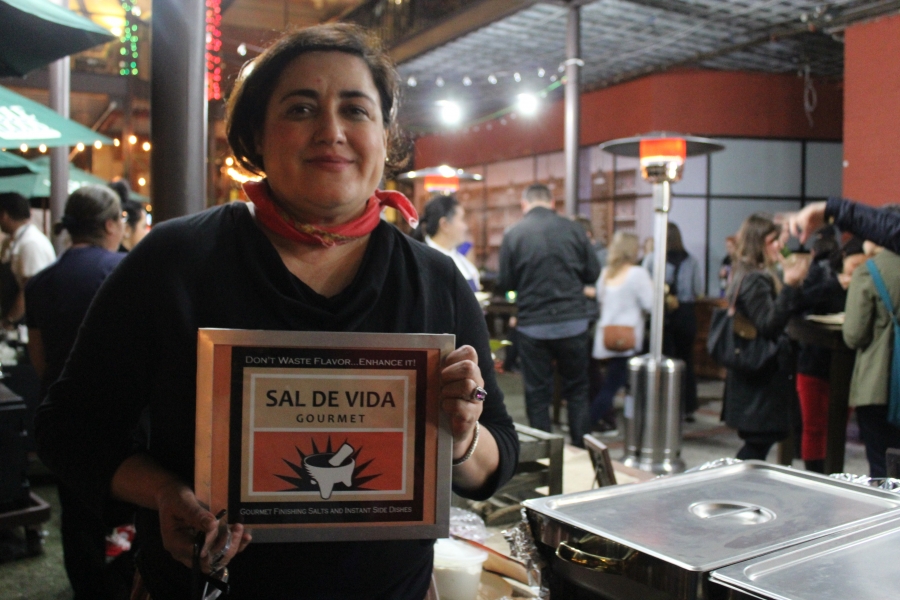 "Mole" comes from the indigenous Nahuatl word for “sauce," a generic term. But over the years, Lahl says, the word has generally become associated with a “complex sauce made with different dried chiles combined with spices — and very savory.” It's traditionally paired with chicken and turkey, but she says it goes great with any kind of meat.

Lahl has also written about the origin of mole, which is still disputed. Some say it dates back to Aztec times, but the more popular version came later, created by nuns in the Mexican state of Puebla.

The list can be up 30 ingredients in some cases, including chiles —  mulato, ancho, pasilla and guajillo chiles were in several of the dishes — pumpkin seeds, plantains, tomatoes, almonds, anise, onion, tortillas, cloves, tomatillos and chocolate, although it’s a myth that all mole has chocolate. Many varieties skip it. 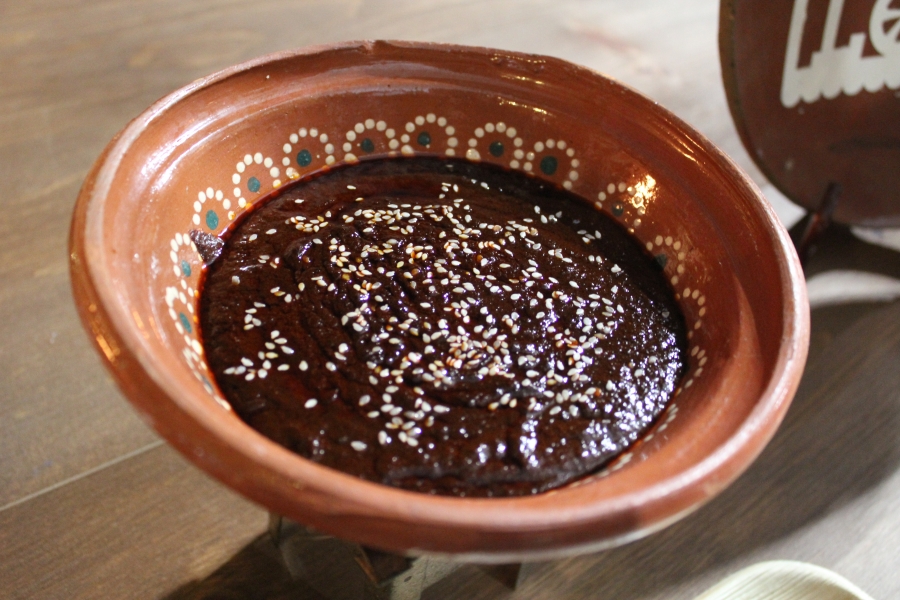 A classic version of mole topped with sesame seeds.

Everyone here agrees that the hardest part is the chiles — finding them, prepping, deseeding and toasting them, and then finding the right balance. “I don’t like dry mole," says Veronica Salazar, who also has her mole on display here. "I like it kind of sweet, but not too sweet. Not too much chocolate, and not too much oil.”

And once you’ve gathered all the ingredients, you need to grind them, toast them and follow several more steps before letting everything simmer. In all, it’s ridiculously time-consuming, but Salazar still has chicken and enchiladas with mole on the menu at El Huarache Loco, her family's Mexican restaurant.

Veronica Salazar never imagined getting to this point when she first arrived from Mexico. “It’s always like, oh, you just come and work for somebody else,” she says.

But then she started making food at home and started delivering. Then she heard about La Cocina, a San Francisco-based non-profit that helps female immigrants without much cash launch restaurants. That's how the scent of Salazar’s mole got to fill the air at this event.

That smell depends on which of the many versions of mole is in the pot. “There are so many kinds of moles,” Lahl says. “White mole, green mole, black mole, red mole.” And you can add Lahl’s own pumpkin version to the list.

In Mexico, the sauce changes from state to state, home to home.­ Lahl remembers her mom and aunts heading out early to the markets in Mexico to gather their ingredients. 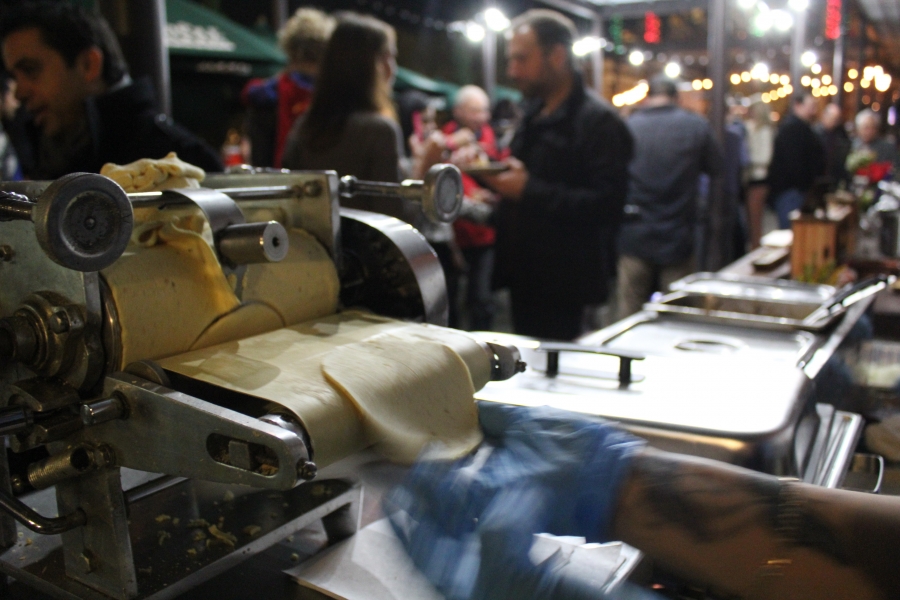 A tortilla maker, brought up from Mexico, was put to use during a recent mole festival in San Francisco.

Fill a pot with just enough water to cover the chiles and bring to a boil for 30 minutes. Set aside and cool.

Meanwhile, dry toast the onion halves, tomatoes, garlic, tortillas, bread, pumpkin, seeds, cinnamon, and cloves in a comal or cast iron pan until lightly charred. Careful not to burn the ingredients. Once toasted, blend the roasted ingredients with the chiles and water from the pot in a blender and mix until smooth.

In a large pot, heat the vegetable oil and add the blended mixture, cooking over medium-low heat for an hour and stirring constantly to avoid burning or sticking. The mixture should thicken considerably. Season to taste.

Add 2 cups of the chicken stock, adding more to the paste until you get the desired consistency and stirring constantly until well-blended.

Add salt to taste and serve over chicken, turkey (or tortilla chips for a twist on chilaquiles).

Serves 30. You can reserve and freeze some of the paste.

In a sauté pan over medium heat, toast the deseeded dried ancho and guajillo chiles. Immediately remove from heat and transfer into a larger pot or container and cover the toasted chiles with hot water. Let the chiles soak for about 15 minutes.

Put all the spices and peanuts on a sheet pan in the oven at 350 degrees for 15 minutes or until the peanuts are toasted and golden brown.

In a full-size 2-inch deep pan or large sauté pan, combine the tomatoes, garlic and onion. Broil until charred.

In a large blender, puree the soaked chiles with a small amount of the soaking liquid until smooth. Add the charred vegetables, toasted spices and nuts and blend everything together until smooth. If necessary, push through a fine strainer to achieve a very smooth consistency.

In a big pot, heat the duck fat or lard until smoking hot. Carefully add the mole and fry for 5 minutes. Add the piloncillo and chicken stock and simmer for one hour. Taste and adjust for salt and a creamy texture. Can serve over chicken or turkey.