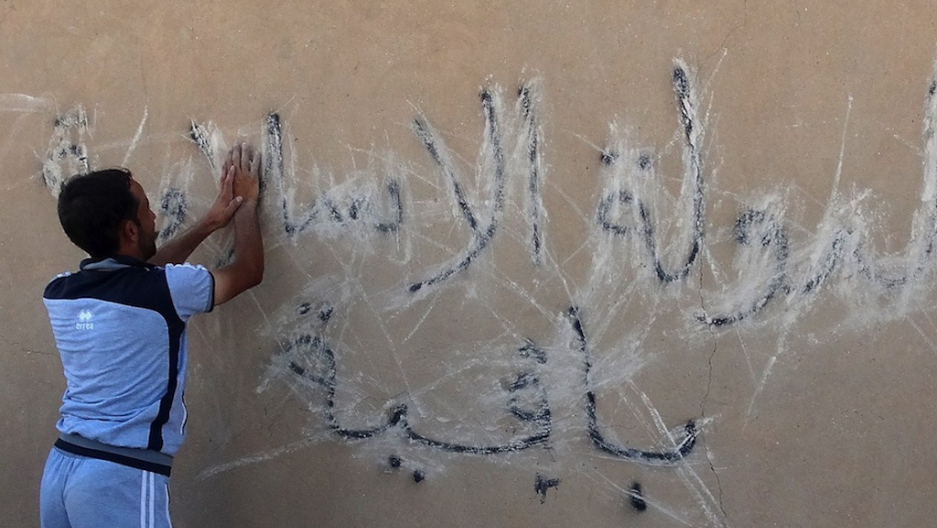 An Iraqi man paints over pro-Islamic State graffiti on a wall in Barwanah town, Anbar province on Sept. 10, 2014 after Iraqi government forces backed by militiamen retook the town from IS.
Credit: Azhar Shallal
Share

ERBIL, Iraq — Abu Ahmed can remember the first time he received a phone call from the Islamic State.

It was late last June and he was still in his hometown of Tikrit. His phone rang. A voice on the line addressed him by his full name and said simply: “Pledge never to practice law again or else we’ll destroy your home," and then hung up.

A prominent lawyer who practiced civil law in the city for decades, Abu Ahmed spoke on condition that he only be referred to by his nickname to protect him and his family.

“I could see that my family was afraid and the situation just became too uncomfortable." So they fled, first to Kirkuk, then to Erbil in Iraq’s semi-autonomous Kurdish region in the north.

As Islamic State fighters wage war against Iraqi government forces, government-aligned Shia militias and Kurdish Peshmerga forces, they have also launched another fight to dismantle Iraqi society from the inside out by specifically targeting technocrats. The extremist militant group that controls nearly a third of Iraq is now targeting lawyers, professors and doctors, driving Iraq’s educated elite out of the urban areas it controls.

This development is compounding Iraq’s larger brain drain problem. Even before Mosul and Tikrit fell to the Islamic State, the majority of Iraq’s educated elite was moving abroad to escape violence and instability.

After weeks of phone conversations, Abu Ahmed agreed to meet GlobalPost at a cafe in one of Erbil’s malls to tell his story. He’s cautious, he says, because he’s seen what the Islamic State has done to his colleagues: some have been executed, most have had their homes and cars confiscated. Others have had their houses destroyed.

“According to their ideology, people who practice law go against Islamic principles,” Abu Ahmed says, “But these people who support [the Islamic State] a lot of them are from the villages, they are not educated. Even their religious education is not accurate.”

Like almost all of Tikrit’s civilian residents, Abu Ahmed and his family are now displaced. But unlike the average Iraqi Abu Ahmed says he’s still being threatened from afar. His main concern is his home in Tikrit. That building, he explains, is “everything” to him and represents all of his investments for his and his family's future.

“Just two days ago they called me again with the same threat,” Abu Ahmed says.

According to Ahmed, the Islamic State learned who practiced law in Tikrit after its fighters seized records from the city’s Bar Association building. Since then the group has methodically targeted the city's lawyers with phone calls and visits to their homes. All come with similar messages: pledge never to practice law again or we’ll destroy or confiscate your home.

“[From the point of view of the Islamic State] they’re basically the worst of the possible traitors,” says Zaid al-Ali, a former legal advisor to the United Nations in Iraq. “Theoretically it's because they don’t recognize Iraqi law. For them Iraqi law is apostate law.”

But the real motivation behind the Islamic States threats, al-Ali argues, is economic. “They want to take over people’s property. They’re thieves basically,” al-Ali says. “All this is just an excuse to steal people’s houses and their cars and their money.”

A similar campaign is underway in Mosul.

Unlike Tikrit, Mosul is still home to a sizable civilian population, about a million residents according to estimates from aid organizations.

“All my old colleagues, they’re all gone, fled to Turkey or the Kurdish areas,” explained one former businessman in Mosul, who spoke via Skype because cell phone lines in the city have been cut.

“Mosul people, they are originally very educated,” the former businessman said, speaking on condition of anonymity. “But now all the doctors, the engineers, the people with high degrees they are gone.”

While three main hospitals remain open in Mosul, the former businessman claims they’re staffed only by a small number of doctors fresh out of medical school. He says these young professionals are forced to spend most of their time tending to the wounds of injured Islamic State fighters who get priority treatment over civilians.

He claims the city’s universities are facing a similar situation. Professors of medicine, history and chemistry have all been forced to stop teaching because their subjects were deemed to be against Islam, a claim the former businessman describes as “so ignorant.”

Abu Ahmed, the lawyer from Tikrit, has five daughters, all highly educated. One is a teacher, another has a masters degree in biology and two have degrees in law. At the moment, there’s no work for them in Iraq and almost all are looking to leave the country to practice in their fields.

But Abu Ahmed says that doesn’t discourage him.

He believes the Islamic State will ultimately fail to rule Iraq. The country’s educated, Abu Ahmed says, see through the group’s flimsy ideology.

“They know that we can distinguish from the law they say is Islamic and the real Islamic law. We know the true way to apply Islamic principles. That’s why we are a threat to them.”