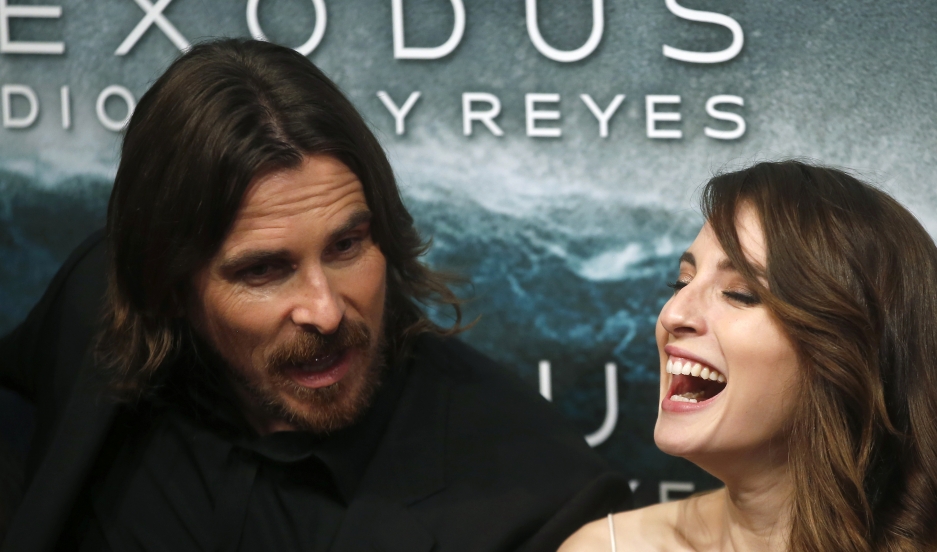 Cast members Christian Bale and Maria Valverde pose for photographs as they arrive for the film world premiere of "Exodus: Gods and Kings" in Madrid, Spain.

If all feature films were put to the test of historical accuracy, few would make the grade. Luckily for Hollywood, the people who greenlight new films don't seem to have have the same fact-checking standards as Egyptian censors.

“It is a Zionist film,” Gaber Asfour, Egypt’s culture minister, told the AFP news agency. “It gives a Zionist view of history and contains historical inaccuracies, and that’s why we have decided to ban it.”

The film follows the same general story line as the book of Exodus in the Old Testament of the Bible. It covers the life of Moses as he leads the Israelites out of slavery in Egypt.

But Egyptian censors had issues with several aspects of the film. They include the depiction of Moses as a warrior, rather than a prophet; the suggestion that it was the Jews who built the pyramids in Egypt; and the scene of the parting of the Red Sea connecting the event to an earthquake, rather than divine intervention.

“This totally contradicts proven historical facts,” the Egyptian minister is quoted as saying.

The movie ban doesn't come as a huge surprise. Egyptian censors also banned “Noah,” starring Russell Crowe, earlier this year. Egypt is a religiously conservative country where more than 90 percent of the population practices Islam. The religion forbids the human depiction of the prophets — including Noah, Moses or Mohammad — in any art form.

The Exodus movie appears to be facing a similar ban in Morocco, but officials there have not made a formal announcement about prohibiting the film.

Films have also occasionally been banned on religious grounds in Western countries. The 1979 British comedy, “Monty Python’s Life of Brian,” was banned for a year in Norway — and for eight years in Ireland. When the film opened in the US, Jewish and Christian protesters showed up, saying the satire was blasphemous.

Still, the case of a short film called “Visions of Ecstacy,” released in 1989, is unique: It remains the only movie ever banned under British blasphemy laws, which were on the books in the United Kingdom until 2008. The 18-minute film depicted a sexualized encounter between Saint Teresa and the body of Jesus. The formal ban on the low-budget movie wasn't lifted until 2012.

In a ruling at the time, a British court said that freedom of expression comes with duties and responsibilities. “Amongst them, in the context of religious beliefs, may legitimately be included a duty to avoid as far as possible an expression that is, in regard to objects of veneration, gratuitously offensive to others," it wrote.

But it might still hold true that one man’s blasphemy is another’s work of art.