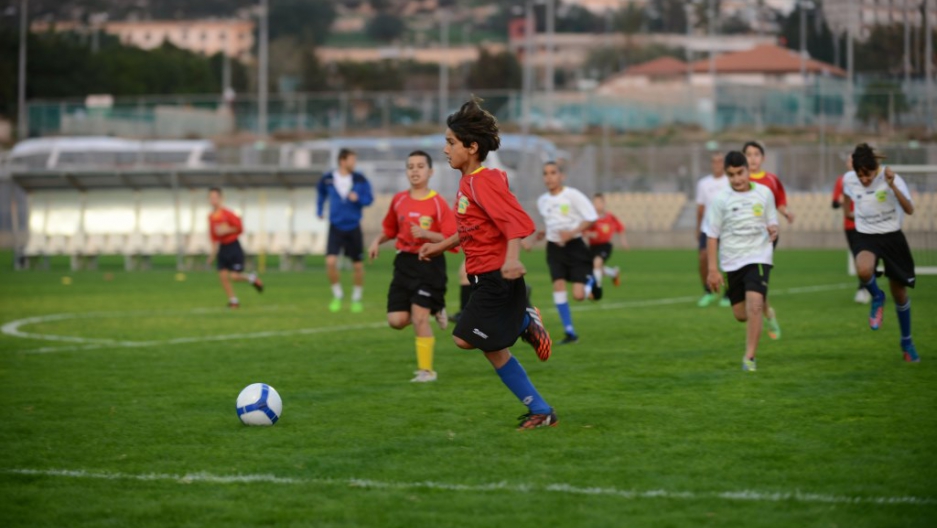 HAIFA, Israel — Commemorating a war of long ago while new violence rages is not a happy exercise, so Britain may be forgiven for focusing on an event that allowed humanity to imagine a ray of hope in the otherwise dismal panorama of World War I: the Christmas truce.

In the weeks and days leading up to Christmas 1914, British and German soldiers emerged from the trenches to exchange the bodies of dead soldiers, prisoners of war, and, eventually, a few gifts. They shook hands. Some have it that they may have even kicked a ball around.

Britain's Deputy Ambassador to Israel, Rob Dixon, went so far as to refer to the historic lull in fighting as the "football truce."

And to commemorate that, the British embassy sponsored the happiest of WWI memorial activities on Dec. 15: a football (a.k.a. soccer) tournament among neighborhood teams from all over the Galilee, including Christian, Muslim, Druze and Jewish boys.

Omar Hassadiya, a 10-year-old from the lower Galilee town of Furedis, had an immediate answer when asked what his goal was: "To win!"

"I want us to win," Hassadiya replied, his eyes shining.

For the past two years, the British embassy has been supporting an organization called The Equalizer, a league of boys' football clubs that aim to improve the lives of hard-luck kids and teach them the rigors and ethics of sport.

Dixon has been playing football "for my entire life," he says. Not so Liran Gerassi, 32, the slight, soft-spoken Jerusalemite who started The Equalizer six years ago as a volunteer project while he was a university student.

"I'm mostly a fan of watching football," he confesses.

Britain's ambassador to Israel, Matthew Gould, appearing somewhat pained, said that his talents also "are not present in sports, sadly."

The event, bringing disadvantaged boys from each sector of Israel's fractured society onto a joyful competitive pitch, is, he said, "something no one can be offended by. It’s a completely positive thing."

"It commemorates a moment in which the British and the Germans were able to get out of the trenches and even in the midst of war — get out. One of those moments," he said, "a single point of light in a very dark time."

British embassies and consulates around the world — from Tunisia to Japan — joined in the effort; the UK ambassador to Lebanon played against some all-stars. David Cameron greeted some young players heading to play on one of the original fields of war, France.

For a few hours, the hashtag #footballremembers trended on Twitter. The feed remains full of photos of truce remembrance matches across the UK interspersed with WWI-era images.

At the match in Haifa, Israeli football stars of every conceivable ethnic origin came to applaud the young players — Gustavo Boccoli, of Maccabi Haifa, and his teammates including the impossibly handsome Dekel Keinan, who was mobbed, as well as Sheran Yeini and Mahran Lala.

It was a time to forget FIFA, the Federation of International Football Associations, and its collapse into mafia-like corruption. So too was hooliganism and violence in Israeli football briefly forgotten as the crowd watched the game in Haifa, entranced by the jumble of gleeful boys under the big lights.

The following day 145 people, most of them young boys, were murdered while attending school in Peshawar, Pakistan.

That day, Tuesday, Dec. 16, was also the first night of Hanukkah, the Jewish winter festival of lights and a joy for children. Speaking at a White House celebration, President Obama said that "the candles of the Menorah remind us that even the smallest light has the power to shine through the darkness."

At the game in Haifa, coach Avihai Magos said, "You know, each one of these boys faces many challenges. But of all the boys who come to us, who face challenges, we chose those who we can see have that spark. We can tell they each have something in them that maybe will be able to take them forward. And then we bring them to the values of sport, and we hope it will all help."