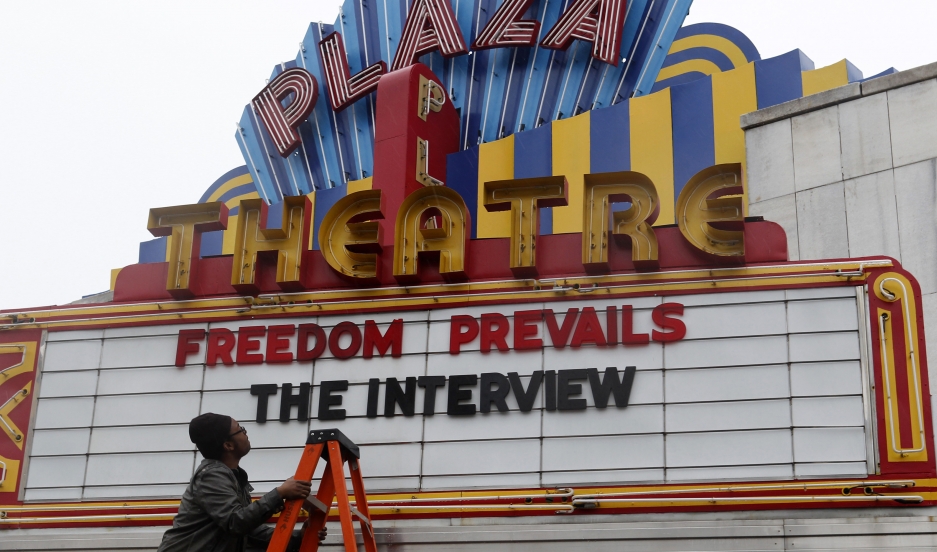 General Manager Brandon Delaney looks up at the marquee sign after the announcement that the Plaza Theatre would be showing the movie "The Interview" beginning Christmas Day in Atlanta, Georgia December 23, 2014.

On again. Off again. Threats. Accusations. And now finally a happy ending.

Could be the treatment for a romantic comedy. Alas, it's not.

It's The Interview, the film starring Seth Rogen and James Franco, which opened in limited release across the US on Christmas Day as originally planned. You may have already seen it streaming on YouTube or elsewhere.

Sony originally canceled the release after the company received threats over the planned debut of the film. But security was hardly on the minds of the throngs of Brooklynites waiting for the noon showing of the movie at a theater in Williamsburg, according to reporter Sydney Beveridge.

“I spoke briefly to the manager and he said they’re just using their normal security, just searching people’s bags on the way into the theater, but otherwise just a normal day,” Beveridge says.

"I don't know who Boromir is" "That's such a Boromir thing to say!" Best movie line ever goes to @JamesFrancoTV #TheInterview

Bring a copy of the constitution to this #Vt movie theater when seeing #TheInterview, get free popcorn, owner says http://t.co/PQg9wzHPwp

So let me get this straight. #Sony (who was hacked) has this site where you can "securely" pay with a credit card to watch #TheInterview ...

People said they came out on Christmas to see the film for a myriad of reasons — from their love of Seth Rogen flicks to good, old fashioned patriotism.

“There definitely seem to be a lot of Seth Rogen fans living in Williamsburg. A lot of people intended on seeing the movie anyway — maybe not on Christmas Day," Beveridge says. "One person sort of framed it as a patriotic idea ... that motivated them to come out.”

The midday showing in Williamsburg sold out. And it has sold out in theaters across the country.  Merry Christmas, indeed, Sony.