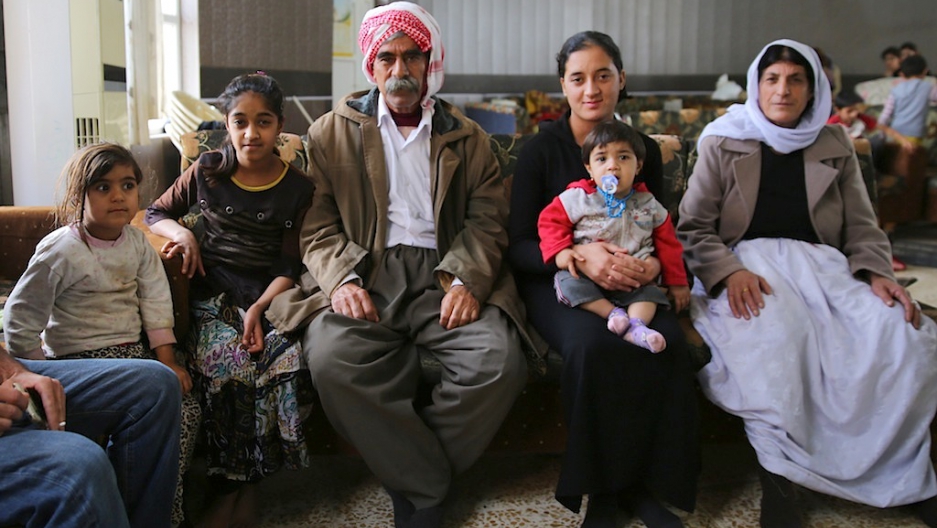 DUHOK, Iraq — As the girls ran frantically in the dead of night, only a flashlight guided them. At 15, Freya Azam Ali had already been thrust into adulthood when she was kidnapped by Islamic State (IS) militants almost 4 months earlier. Many times she held her hand over the mouth of her 10-year-old companion Bousha to muffle the sound of her sobs from their pursuers.

The men chased after them all night. The girls ran and hid repeatedly, but each time the uncontrolled crying of Freya’s young friend or the light the girls used to find their way betrayed their position. Finally they made a last-ditch sprint for the line controlled by Yazidi fighters, running under heavy gunfire.

Freya describes the scene from the safety of her meager shelter in the Khanake Refugee Camp in Duhok, Iraq.

“They started shooting at us with guns and rockets. The sound was deafening,” she says, describing the last moments of their  chase on the rugged mountainside. “There were dogs chasing us. IS was shooting at us. I thought we would die for sure. Bousha didn’t stop crying the whole time.”

But finally, as the girls reached the limits of IS territory, Yazidi militia fighters rushed in to defend them. The girls were returned to their families in Duhok some days later.

Freya and Bousha are among those you could call the lucky ones. According to The Yazidi Fraternal Organization (YFO), around 5,000 other Yazidi women and children remain in the hands of IS militants in Iraq and Syria, many of them treated as sex slaves bought and sold like livestock.

The YFO has also registered the names of thousands of Yazidi men believed to have been killed or captured by IS during a three-day period beginning Aug. 3, when the militants seized control of numerous Yazidi towns in northern Iraq, including Freya’s.

As of last week, the Committee to Assist Escaped Yazidis has registered 150 women, 57 children and 229 men who have escaped IS captivity.

The number is staggeringly low, especially considering the risk to the Yazidi population was one of the key reasons US President Barack Obama gave for authorizing the current campaign of targeted airstrikes against IS in Iraq. The US is also supplying weapons and training to local Iraqi and Kurdish forces.

International support is helping to push back IS, YFO director Hussan Salim said earlier this month. “It is effective. We can see this,” he says. Air raids or even low-flying aircraft have often sent IS prison guards running, giving their captives, mostly women and girls, a chance to escape.

“But it is not enough. We cannot just leave these women to run alone.”

Salim said only special operations forces — either trained Iraqi units or foreign teams, on the ground — could free a significant number of Yazidi captives.

“We know the locations of where many of these women are being held in collective prisons,” Salim said. More are sold or traded every day. “The longer they wait the harder it will be. [The captives] have already been widely distributed in both Iraq and across the Syrian border.”

Last week, local and international forces launched a joint effort to secure routes around Mount Sinjar and to reclaim surrounding villages that had fallen to IS. Many small villages have been retaken, but so far there are no reports that IS captives have been liberated. A fierce battle for villages in the Sinjar area continues.

It’s impossible to know how many women have died or been recaptured in dramatic escape attempts like Freya’s in recent months.

“Clearly we don’t have these figures,” Salim said. “But we can assume the odds of making it out alone are low.”

In an interview before the ground assault to retake Sinjar, Salim said he was disheartened that the US appeared to be focusing their protection on assets rather than lives.

“The areas where they have regained control are either oil-rich or strategic for some other reason, but for our villages and these areas that we know are operating as prisons there is no effort to regain control. As Yazidis it makes us feel sad and abandoned,” he said.

This latest push has given some hope to the thousands of Yazidi families with missing loved ones. As peshmerga and Yazidi militia groups move deeper into IS territory, hopes are strong that many of their captives may be recovered. But already fighters on the ground are sending through reports of finding mass graves. Military victory in the Sinjar region seems set to bring both relief and heartbreak to this displaced community.

For the women being held, time is crucial.

Freya managed to escape before she was sold or abused. When IS militants entered her village on Aug. 3, she had tried to run with other family members. They were all shot around her.

“I saw them fall one by one, then I felt myself hit the ground,” she said.

When she woke up she was in a large room with other captives. Freya had been shot in the shoulder. A local Arab doctor had been brought in to provide primitive treatment to the women and children. He removed the bullet and stiched her wound. A wide, raised pink scar still stretches from her shoulder to her armpit.

“The men they didn’t care about. [IS] just let them die,” Freya said.

She was later sent to the village of Kocho where she was held in a guarded house with 37 others. Once, she tried to run. But when she found a pile of rotting bodies just outside she returned, afraid of what might happen to her if she were caught.

Months after their capture, Freya and Bousha were selected by a group of men who took them to a village she knew, close to Mount Sinjar. Overhearing their captors’ plans to ship them to Syria the next morning, the girls saw their last chance to run. After stealing a flashlight they pried the window open with a spoon. After the night's harrowing chase, they somehow made it across the IS front line with Yazidi forces.

Yazidi militia commander Qassim Shasho has received many girls like Freya at his Sinjar Mountain base.

“Some of the girls escape alone and manage to call their families or make their way to the mountains on foot,” Shasho said. “Other times, IS members contact us directly to assist in the release of women. We also pay smugglers operating within the Islamic State to get our girls out.”

Shasho said there are many good people living under the Islamic State that are willing to help. Even some Arab families that support IS but are appalled by the systematic sale and rape of Yazidi girls have done much to help.

Nahala Morat, 14, was one of four Yazidi girls released in a deal two weeks ago. A local Arab man brought the four young girls from an IS member for $3,000 each. At first Nahala said she was afraid of what he would do to them but instead he took them directly to his mother who cared for them until he was able to get in contact with Nahala’s uncle. An exchange was arranged and the girls were delivered to the Yazidi militia awaiting them on the mountain before being airlifted to Duhok were Nahala and her brother share a tent with their uncle’s family.

While Shasho has dealt with many good men in such rescue deals, he admits others are just looking out for their own interests.

“They are thinking about their future. When they see the international community rallying against IS, they see their days are numbered. So they are playing their last card before it is too late,” he said.

Shasho said when they make contact they ask for future protection for themselves and for their families.

“If anyone helps even one of our women to return, I give them my word I will do all I can to protect them when IS falls,” he said.

Ameena Saeed, a former Iraqi politician who now heads the Duhok-based Committee to Assist Escaped Yazidis, works with medical teams to arrange health and psychological care for hundreds of Yazidis who survived their run from IS.

Each case is different, she said. Some are barely alive after running and hiding for days or weeks. Many of the girls have been sold up to three times to different individuals or groups of men. Some have lived through hell — repeatedly raped, drugged, and tortured physically and psychologically, with little food and inadequate shelter.

Others have been kept together in large family groups and, like Freya and Bousha, largely left alone. But almost all who survived have been forced to convert to Islam and swear allegiance to the group that has systematically tried to wipe out their people.

This weighs heavily on the survivors.

In a private room at the Lalish temple, Baba Chawish, one of the Yazidis’ top three holy men, pleaded for international support.

“We are a poor community and a peaceful religion. We don’t hold hatred for any other belief or people, even the Islamic State. We have no other problem with them other than their actions towards us,” he said.

“If the international community supports and protects us we can stay here in our holy land, but we are losing faith. We need help if we are to survive.”

Worshippers pay respects at the entrance to the Lalish temple complex in Duhok, Iraq, in early December 2014.