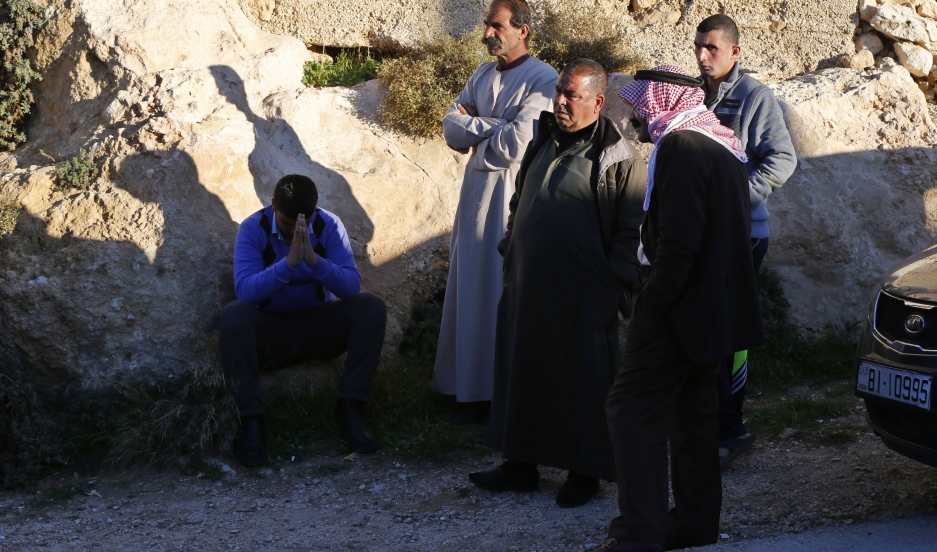 Relatives of the Jordanian pilot who was captured by ISIS forces in Syria congregate in front of his family's home in the Jordanian city of Karak on December 24, 2014.

Pictures published by ISIS on Wednesday show Kasasbeh in apparent shock. In others, the fighters pose victoriously with some of the parts from the downed aircraft, which the group claims it shot down using a heat-seeking missile. US Central Command says the claim is untrue.

"Evidence clearly indicates that ISIL did not down the aircraft as the terrorist organization is claiming," the organization said in a statement issued after the incident. The Jordanian government, which is part of the US-led coalition against ISIS, confirmed that the plane crashed  in Syria but could not confirm whether it was shot down or crashed from other causes.

Whatever the causes, Jordanians are worried about the fate of their countryman. "People say we should send special troops to rescue the pilot or enter a ground war," says Daoud Kuttab, the founder of Jordan's Radio al-Balad.

Kuttab called the pilot's capture a "reality check" for the country. "Even those who were against the coalition [against ISIS] have now wrapped themselves around the Jordanian flag and [are] in favor of their pilot," he says.

ISIS has not yet declared its demands but Kuttab believes they will most likely ask for a prisoner exchange, perhaps for one female prisoner in particular.

The woman was a follower of Abu Musab al-Zarqawi, the man who once led al-Qaeda insurgents aganist American forces in Iraq. About 10 years ago, she and a few others attemped to launch a suicide attack in Jordan, but her suicide belt didn't go off and she ended up in a Jordanian prison.

The Jordanian government, which has kept close tabs on potential jihadis in the country, has also captured ISIS supporters who might interest the group.

Kasasbeh's family has meanwhile begun pleading for ISIS to release him. His brother came on Radio al-Balad to tell the young, recently married pilot's story. "He was saying he is a good Muslim and he prays," Kuttab says.

Sadly, though, Kuttab says he doubts the pleas will make a difference.