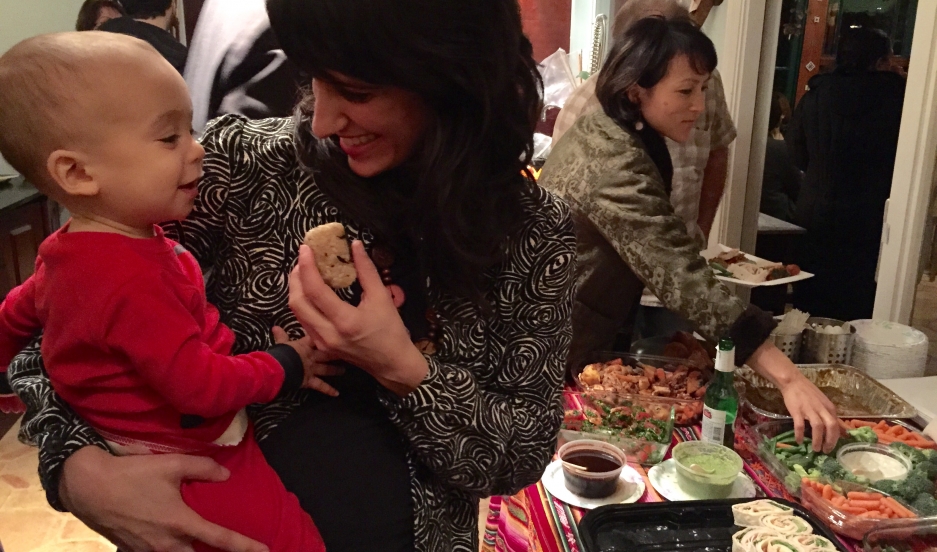 Thousands of years ago, the sun god Mithra was born on the longest night of the year: the Winter Solstice. He belonged to the ancient Zoroastrian faith, battled the god of darkness, and won.

To celebrate, the Shabe Yalda festival was created and is still celebrated throughout much of the Middle East, including in Iran.

“It’s about the force of good versus evil, symbolized by light versus darkness,” says Wendy Warda, who has hosted Shabe Yalda parties at her home in El Sobrante, near San Francisco, for years. “The idea was, you had to stay up all night. You had to share with friends. You had to share poetry or some type of art and, of course, food.”

At Warda’s party this year, like the others, there was plenty of food, especially pomegranates, which represent the red light of dawn. Smokers huddled in front of the fire pit that burned all night. Others sat in a circle in the living room and sang old Iranian songs, songs that made people like Sepideh Dianati feel a bit closer to home.

Dianati just moved from Iran to California for work, and couldn't believe that Shabe Yalda is also celebrated in the United States. “I thought that all the traditions and customs from Iran finished,” Dianati says. “But now I’m so happy to see lots of people who want to celebrate [it], who like it!”

Warda first found out about Shabe Yalda through her husband, who is from Iran. And while the festival is closely identified with that country, her interpretation of it is to throw the doors open and invite people from all cultures together.

Warda's Shabe Yalda party always has a cross-cultural edge. People perform Balinese or Moroccan music, and a jazz band often shows up. This mix is what draws Nelson Medina to the party. Medina is Salvadorian and married to a French Iranian woman. He loves Shabe Yalda because it reminds him of his own winter traditions.

“We make these little parties for Christmas in El Salvador, where it’s very similar, where we make everybody feel very welcome,” Medina said. “Strangers, family and everybody, we just gather and have drinks and dance and have fun.”

But Medina didn't stay up all night, breaking the strict Shabe Yalda tradition. After all, the sun rises well past 7 a.m. on the Winter Solstice. Most of the other partygoers didn't stick around until daylight, either: The party shut down around two in the morning.

But staying awake until dawn isn’t the point. It’s about keeping a ritual alive, because nights like Shabe Yalda — or Christmas Eve, or Hanukkah — are about bringing friends and family together.