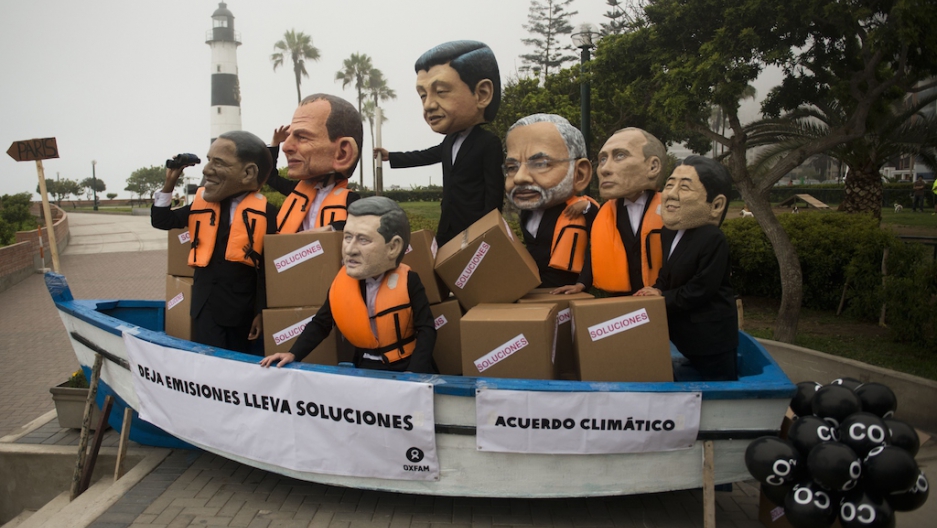 LIMA, Peru — With a new draft of a United Nations climate treaty in hand, the world can breathe more easily as 2014 comes to a close.

What a relief, right?

Late last Saturday, after 13 exhausting days of haggling among nearly 200 governments here, the negotiations finally achieved their goal: a dense text known as the Lima Call for Climate Action. It provides the outline for an international treaty, to curb global greenhouse gas emissions, to be signed in Paris a year from now.

With some experts saying the planet’s future depends on that accord — and many here fearing the talks were on the brink of collapse — no wonder many have been hailing the breakthrough.

The UN’s climate chief, Christiana Figueres, described the deal as “a very important advance.” Manuel Pulgar-Vidal, the Peruvian environment minister who chaired the talks, declared: “Governments have left with a far clearer vision of what the draft Paris agreement will look like.”

Yet many environmentalists seriously disagree.

Some are even arguing that the agreement is a backward step. Friends of the Earth describes the text as being “driven by the interests of rich developed countries and corporations, which does little for people or the planet.”

GlobalPost decided to take a closer look at the text.

Few actually expect the Lima deal, or next year’s Paris treaty, to meet the main stated goal of the UN climate talks: stopping the planet from warming 2 degrees Celsius (3.6 degrees Fahrenheit) above pre-industrial levels, which scientists say would potentially be catastrophic.

The new text even expresses “grave concern” regarding the huge gap between countries’ existing pledges to cut gas emissions and the amount needed to avoid the 2 degree — or preferably 1.5 degree — temperature rise.

The question now is how far over 2 degrees Celsius will we shoot — and how will that harm the planet? Much will depend on the next 12 months of negotiations leading up to Paris, and how willing governments as diverse as the United States, China, India, Russia, Saudi Arabia and Venezuela are to quickly slash their carbon emissions, rather than make excuses based on others’ supposed inactions.

Reduce what you want, if you want?

The Lima treaty sets a March 2015 deadline for governments to submit their national plans to curb carbon emissions, known as “Intended Nationally Determined Contributions” or INDCs. And for the first time, poor countries are now also expected to propose emissions cuts — or at least explain how they will avoid growing their carbon footprint as they develop economically.

That is good news. China is now the world’s largest emitter. And India alone could massively jack up global emissions as economic growth makes its 1.2 billion population’s low per capita carbon emissions balloon toward Western levels.

However, there is a huge catch. The INDC deadline, and the level of detail each country provides, is voluntary. That was the result of a fudge between developed countries, led by the US, which wanted rigorous accounting of emissions reductions, and China, which was keen to avoid independent scrutiny of its commitments.

Show us the money!

However, that’s a drop in the ocean compared to the $100 billion per year that the negotiators previously agreed will be needed by 2020 to help Southern nations meet the cost of clean, low-carbon development while also adapting to climate chaos.

Most developing nations wanted an ironclad guarantee in the Lima text that industrialized nations would provide that level of continuous funding. Instead, the final draft “recognizes that developed country parties commit” to providing the cash.

That wording may not be worth the paper it’s written on, according to some commentators. What’s more, the separate finance text agreed in Lima did not even provide a roadmap for how governments might work together to raise that kind of money.

Poor countries fought tooth and nail to have this wording included in the Lima text. “Loss and damage” refers to the unavoidable harm that climate change will inflict on them (as opposed to changes that can, at a cost, be adapted to).

Led by the tiny Pacific island nation of Tuvalu — which stands to disappear due to rising sea levels caused by melting polar ice — they wanted an explicit acknowledgment of this crucial issue. Most rich countries opposed it, fearing it would open up a Pandora’s box of financial liability for them, with the principle historic greenhouse gas emitters having to compensate the worst hit nations. Instead, developed countries want the Paris deal to focus on cutting future emissions.

Arguably, Tuvalu and its allies have won a key battle in having “loss and damage” included in the Lima text. But only the next 12 months will tell whether they can now win the war by having that translated into specific commitments for financial compensation in the final Paris accord.