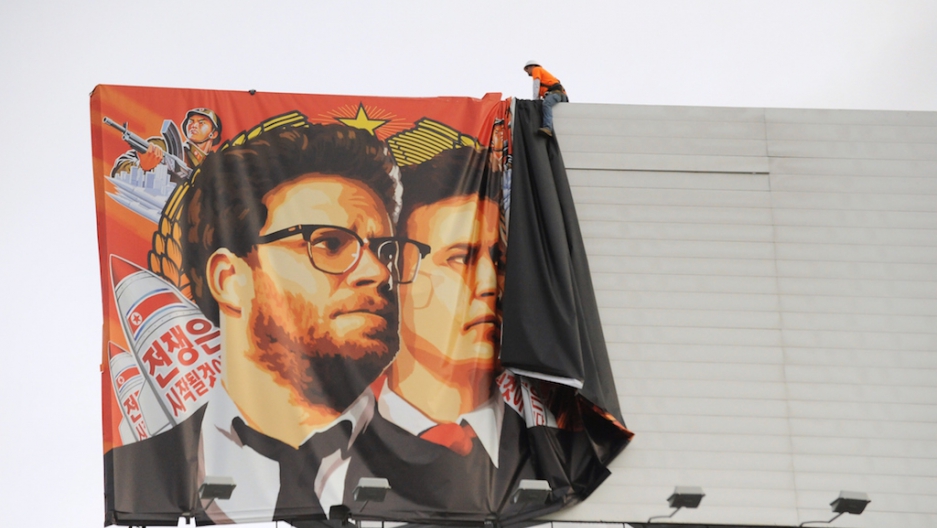 Workers remove a poster-banner for "The Interview" from a billboard in Hollywood, on Dec. 18, 2014, a day after Sony announced was cancelling the movie's Christmas release due to a terrorist threat.
Credit: Michael Thurston
Share

For more than two decades, Syria, Sudan and Iran have consistently made the list — as has Cuba, whose inclusion the Obama administration is currently reviewing. But the blustery rogue state of North Korea, a former member, has been left out since 2008, after Pyongyang allowed access to nuclear inspectors.

Suddenly, North Korea could be headed back to the dreaded list.

On Friday, the FBI determined that North Korea was the main culprit behind the Sony hack — which included a threat invoking 9/11 against movie theaters. A frantic Sony called off the premier, ruining the holidays for moviegoers who wanted to see the fake Kim Jong Un’s head explode.

North Korea has denied involvement, calling for a joint investigation with the US.

An unfazed Washington, though, is still weighing how to respond to the incident. In an interview with CNN on Sunday, Obama said he did not consider the Sony hack an “act of war,” but a form of “cyber-vandalism.” The president told CNN on Sunday that he’ll “review” whether to undo the Bush-era decision.

“This would be a big deal,” said Joshua Stanton, a Washington, DC-based lawyer who helped draft a recent sanctions bill against North Korea.

“Because almost everything in North Korea is controlled by the government, this would effectively force most US corporations and their subsidiaries to divest from North Korea, closing one important loophole in our current sanctions,” he said.

Countries that are deemed state sponsors of terrorism face restrictions on foreign assistance, a ban on defense exports and sales, and controls over exports of “dual-use” items that have both military and peaceful applications — such as lasers and chemical manufacturing equipment.

North Korea is no stranger to these measures, long embargoed for its nuclear and missile tests.

But a re-listing would tighten the screws further, potentially devastating its efforts to raise foreign currencies and engage in business around the world, experts tell GlobalPost.

American diplomats, for instance, would be required to oppose grants and loans from the World Bank and the International Monetary Fund. The regime would also be prone to personal injury lawsuits in the US should it sponsor more terrorist acts.

North Korea has already lost a raft of little-known cases in the US stemming from plots before the de-listing. The victims are now trying to collect close to $500 million in awarded damages, Stanton said.

Critics also question why the Bush administration de-listed North Korea in the first place. Pyongyang joined the state sponsor list in 1987, when it was implicated in the mid-air bombing of a Korean Air flight that killed all 115 passengers on board.

“During the Obama administration, North Korea has been found to sell arms to Hamas and Hezbollah, and has threatened to bomb South Korean balloon activists as well as the Blue House [the South Korean president’s house] and media outlets,” said Sung-Yoon Lee, a professor of Korean studies at the Fletcher School at Tufts University.

He called for sanctions to be ratcheted up to the levels used for Iran and Russia, which he says come with harsher restrictions.

“Many have the mistaken notion that US sanctions on North Korea are maxed out,” he said.