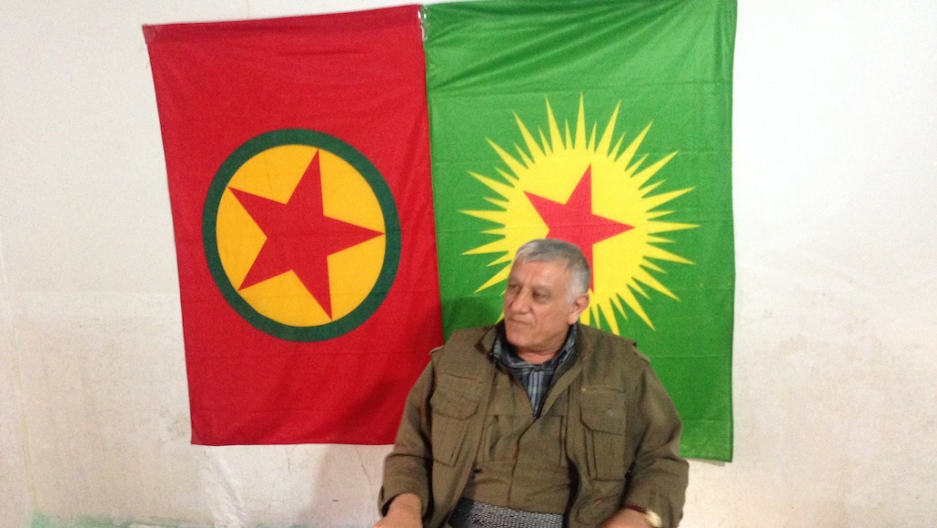 QANDIL MOUNTAINS, Iraq — When the United States joined the fight against the Islamic State in September this year, it inevitably wound up with some strange bedfellows.

From the Shia militias that killed US troops by the hundreds during the most violent days of the Iraq war, to Iran — Washington’s public enemy number one.

Then there is the Kurdistan Workers’ Party (PKK), a group unknown to most Americans until a few months ago.

The PKK’s decades-long fight for autonomy for Turkey’s Kurds receives little attention in the West. This is especially the case since the most violent days of its guerilla campaign wound down.

Today, however, the Kurdish group has become a de facto ally of the United States in the fight against IS, playing a key role on the frontlines in Iraq, from Mount Sinjar to Makhmour.

This secular group has won friends in the US and Europe for its success against IS and its stated commitment to democracy and women's rights in the Middle East. But you won’t hear US officials lauding the efforts of the PKK, for one simple reason: the group is designated a terrorist group by the State Department.

Now, the PKK is calling for that to change.

In an interview with GlobalPost from their stronghold in the Qandil Mountains in northern Iraq, the group’s military chief Cemil Bayik called on the US to remove the PKK from the terror list, so that it may be able to better fight their common enemy.

“The PKK is one of the most effective forces fighting against ISIL, standing against it on the frontlines,” said Bayik. “I call on those concerned for the PKK to be removed from the list of terror organizations and free themselves of this burden. It is high time.”

Pointing out that a US-led coalition is fighting the same enemy, Bayik asked: “How can they keep the PKK on the list of terror organisations in a situation like this? This is a contradiction.”

Up in the Qandil — the rugged mountain range that the PKK calls home. That hut on the right is a memorial to a family killed on the road there by a Turkish jet.

The PKK is made up primarily of Turkish Kurds, but it is based in the mountains of northern Iraq.

An unofficial area of PKK control begins about 60 miles from the Turkish border and stretches east to the Qandil Mountains on the border with Iran.

The rugged mountains have provided the group with a base for its attacks and a great natural defense, ensuring its survival despite several attempts by Turkish forces to dislodge it.

The rapid rise of IS has caused a repositioning of sorts for the PKK. Whereas its fighters used to head north across the border to Turkey, now they are heading south in their droves to fight a different enemy.

It should come as no surprise that the PKK wants to be off the list — where it has been since 1997. After all, no one likes to be called a terrorist. But the idea has recently been gaining traction elsewhere.

A recent op-ed by the Bloomberg editorial board argued that its terrorist status “is falling out of date.” The Washington Post offered a similar argument, albeit more indirectly, as did David Phillips, Director of the Peace-building and Human Rights Program at Columbia University, in an op-ed for CNBC.

French intellectual Bernard-Henri Levi, writing in the New Republic, said the group has “reached the point reached by the Irish Republican Army when, at the close of the 1990s, after decades of urban guerrilla war, it renounced violence."

Events of the past few years appear to support this argument. The PKK fought a violent guerilla campaign against the Turkish state for many decades, in response to Turkey’s own violence and repression against the Kurds.

In the State Department’s explanation of the group’s activities, it says the PKK “has engaged in terrorist attacks in eastern and western Turkey."

“Primary targets have been Turkish government security forces, local Turkish officials, and villagers who oppose the organization in Turkey,” it continues.

But in recent years the PKK has renounced violence as a means to achieve its aims in Turkey, and looks to be on a tentative path to peace with its longtime foe.

A ceasefire is holding and for the first time in decades the Turkish president, Recep Tayyip Erdogan, appears to have the political capital and the will to end the bloody conflict that has cost over 40,000 lives.

Four newly filled graves at a cemetery for PKK fighters in the Qandil. They were killed fighting ISIS in Makhmour.

The PKK's leadership is aware of the debate currently taking place over its status as an ally come enemy of the United States. Bayik said that the group “pays a lot of importance to these discussions,” and hopes the US can force Turkey’s hand.

“The PKK has never taken any military action against US or EU. The only thing the PKK has done has been to struggle against the Turkish occupation of Kurdistan,” said Bayik.

Bayik, one of the founding members of the PKK, points to his fighters' success on the battlefield as another reason for the US to drop its designation.

"In Shingal (Sijar) we succeeded in evacuating civilians, which even the US couldn't accomplish."

But it won’t be easy. Not everyone agrees with the PKK’s assessment of its own activities. The EU, Germany, Japan, Australia and Canada, to name a few, still classify it as a terrorist organization.

Then there is Turkey. On the surface it is keen to solve the ‘Kurdish question’, but it wants to do so on its own, and is vehemently against any reclassification of the PKK. As the second-largest NATO member in terms of its military capabilities, its sway over the US is far from negligible.

The State Department itself appears to be in no rush to remove the PKK from the list. Despite a fractured relationship of late, caused in part by differences of opinion over how best to deal with the Syrian conflict, Turkey remains a key ally in the region at an important time.

One official, outlining the State Department's position to McClatchy, said: “The idea that ‘This group’s being very helpful against ISIL so we should remove the designation’ – that wouldn’t merit a sufficient case, in our view, for de-listing.”

Speaking to GlobalPost, a State Department spokesperson said: "The US position on the PKK is clear and longstanding — the PKK is a foreign terrorist organization."

But there are some aspects of US policy here that, while not explicitly contradictory, are confusing.

For example, while it is US policy is to have nothing to do with the PKK, officials have met with its Syrian offshoot — the Democratic Union Party (PYD).

The PYD’s military arm, the YPG, is also fighting IS — most of it taking place in the city of Kobani, which the US-led coalition has invested heavily in defending.

The State Department spokesperson said the US "views the PYD as a separate organization and has not designated it as a terrorist organization."

They added that the US has "made clear our desire to see the PYD break any ties to the PKK."

The distinction will likely be lost on most observers, on Turkey, and more importantly on the PKK, which has sent its own guerillas to fight alongside the YPG. If anything, cooperation between the YPG and the PKK has only increased as the fighting goes on.

It seems that for now at least, the PKK will remain a silent partner of the US in the fight against IS. In the meantime, the group’s leadership will take help from anywhere it can get it.

“We are ready to cooperate and work with any force that is against them. We have already shown this,” Bayik said. "The PKK is fighting ISIL on behalf of everybody."