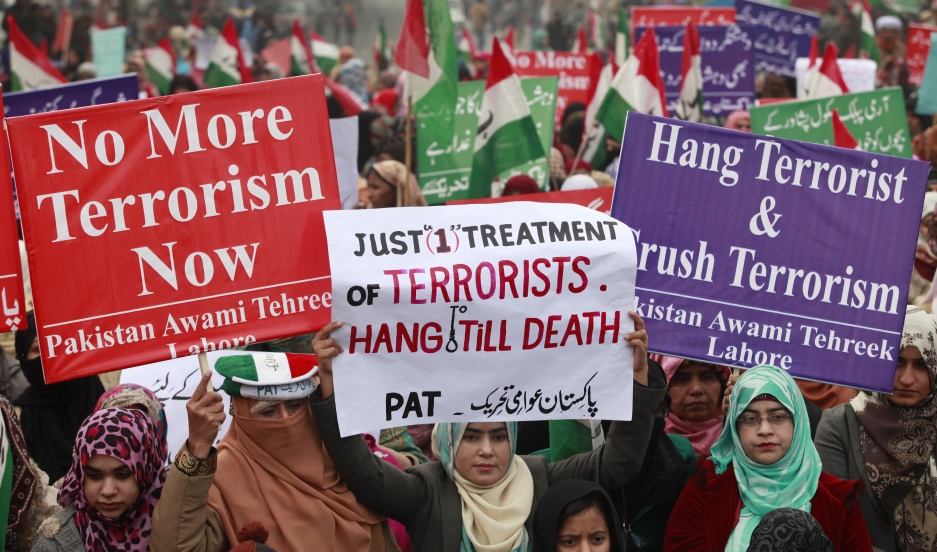 Supporters of Pakistani political party Pakistan Awami Tehreek hold signs to condemn the attack by Taliban gunmen on the Army Public School in Peshawar during a rally in Lahore on December 21, 2014.

While Pakistan has seemed more or less united in its outrage over the attack on a Peshawar school on Monday, there has been considerable soul-searching among Pakistanis over whether terrorist groups are tolerated by certain powerful political factions.

Akbar Ahmed, a professor at American University and Pakistan’s former ambassador to the United Kingdom, says “there is a mood now after the Peshawar massacre in Pakistan to deal firmly and unequivocally with the terrorists."

Yet while the nation appears to be making a shift toward taking a stronger hand with terrorist groups, Ahmed points out there are several nuanced factions within Pakistan that might not be ready to change.

“Pakistan is partly a tribal society,” he says. “It’s also a very sophisticated urban society, and it’s also an agricultural society. All of these different societies mesh, overlap, and are juxtaposed."
Those different societies often have different views on acts of terror, Ahmed explains: "You have people who would be horrified by any acts of terror, and then you have people who will say, ‘Well, the people involved were tribal, they were our cousins so we need to be lenient or look the other way.’ That is why you see this inconsistency of policy."
But Ahmed still sees signs that Pakistan may develop a more consistent policy and strategy for fighting terrorism.
“I’m hearing the new commander-in-chief actually talking about hanging or executing the terrorists who already in captivity,” he says. “I’m hearing senior generals say, ‘Shoot all 20,000 of the captives in jail’ and so on. This is the kind of emotion that we’re seeing which did not exist last week. Even the prime minister said, ‘I’m going to now deal with them very, very sternly.’”

Those comments by Nawaz Sharif, Pakistan's prime minister, are particularly significant, Ahmed says. Sharif’s party, the Muslim League, has historically tended to be “softer” on the Taliban.

“These are indications that Pakistan is going to start taking this threat very seriously,” he says. “They’re recognizing that this is not only about the United States — this is Pakistan’s problem, and it must be solved. It can not go on like this or the state itself is in danger of unraveling.”