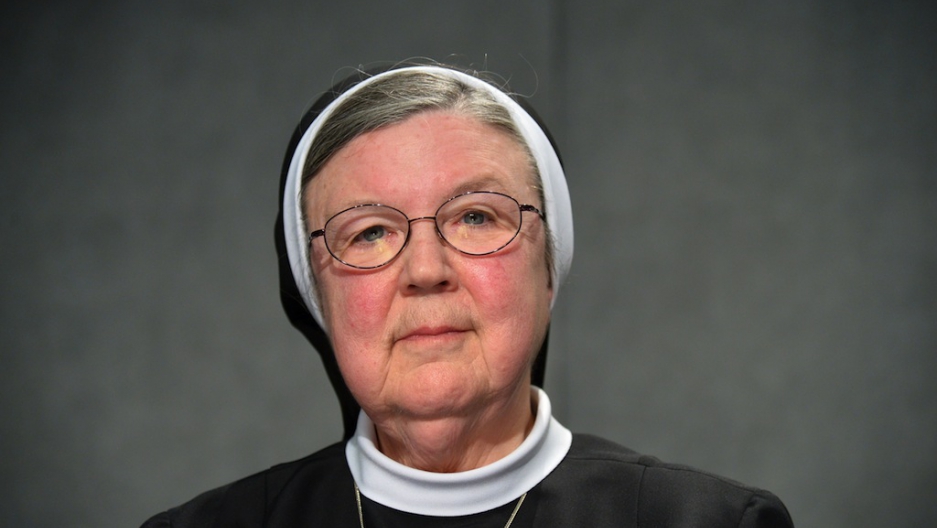 Mother Mary Clare Millea, apostolic visitor for the Vatican, attends the presentation of the Final Report of the Apostolic Visitation of Institutes of Apostolic Life of Women Religious in the US on December 16, 2014 at the Vatican.
Credit: Alberto Pizzoli
Share

Trailed by bitter controversy, a six-year investigation of American nuns ended Tuesday with the release of a Vatican report that praised the religious sisters “for all that they contribute to the church’s evangelizing mission.”

The document released by Congregation for Institutes of Consecrated Life and Societies of Apostolic Life – a major Vatican office – drew on dozens of interviews in convents and religious houses which disproved allegations that caused Cardinal Franc Rodé, as prefect of the congregation in 2008, to order an investigation into “a certain secular mentality ... and perhaps also a certain ‘feminist’ spirit,” as Rodé told Vatican Radio at the time.

One of the more conservative cardinals in the Vatican, Rodé was not at the Tuesday press conference at which his successor, Brazilian Cardinal João Braz de Aviz, struck a tone of harmony with the nuns.

More from GlobalPost: A New Inquisition: The Vatican's investigation of American nuns

Within the politics of the Roman Curia, Braz de Abriz has also emerged as an ally of Leadership Conference of Women Religious (LCWR), the American organization representing superiors of 80 percent of the orders of religious sisters. A separate Vatican office, Congregation for the Doctrine of the Faith, had imposed an overseer, Seattle Archbishop Peter Sartain, the vet the group’s speakers and publications.

“The Vatican realized they messed up this situation and they are trying to mend fences,” Sister Christine Schenk of Cleveland told The GroundTruth Project.

“They saw it very quickly because of public opinion. Benedict was quick to replace Rodé with someone more sympathetic of sisters, in Braz de Aviz. The backpedalling started with Benedict and accelerated with Francis.”

One spark of the investigation was a 2008 conference that Rodé attended on religious life at Stonehill College near Boston. Sister Elizabeth McDonough, a canon lawyer, accused the LCWR of creating “global-feminist-operated business corporations” and “controlling all structures and resources.”

Mother Mary Clare Millea, who drew the unenviable task of leading the investigation, or apostolic visitation, worked quietly in allaying concerns among the superiors and communities she visited, explaining that she was not there as an enemy.

The final report has no corroboration of Rodé’s charges nor does it suggest a feminist conspiracy.

As the investigation Rodé launched made news, Vatican officials saw the blowback in media coverage which cast the nuns, working on the margins with the poor, confronting cold male bureaucrats in Rome.

Rodé was an unstinting supporter of Father Marcial Maciel, a notorious pedophile and founder of the Legion of Christ, an order enmeshed in lawsuits in America for duplicitous fundraising.

As Rodé retired from his office, the second Vatican investigation, by Doctrine of the Faith, against the progressive superiors in LCWR provoked criticism in the Vatican from people with clout: big-ticket donors to Catholic groups and causes.

A prominent Catholic philanthropist who spoke to GroundTruth on condition of anonymity described the fallout: “A broad range of Catholic foundations privately expressed to bishops and cardinals their utter dismay and strong opposition to this wholly unnecessary investigation of women religious.”

The concerns of such donors quickened with news coverage of the questionnaire that the apostolic visitation sent to the religious orders which asked for sensitive internal data on assets, landholding and financial information that caused many superiors to submit incomplete questionnaires, withholding information on money.

This happened as many orders were selling properties to provide elder care for their rapidly aging communities. The idea of Vatican investigators probing the finances of convents hit a deep nerve in the philanthropic community.

Many foundations with Catholic roots have struggled with bishops and religious superiors, male and female, in addressing the massive costs of elder care for organizations that never invested in 401(k) plans, and in many instances, did not pay social security for the priests and nuns.

Were all these philanthropists being duped by a radical feminist agenda?

As the complaints by major donors registered in Rome, Vatican officials found themselves in the embarrassing position of being seen as critics of religious women involved in church programs supported by thousands of parishes and prosperous donors.

“Many foundations have longstanding familial ties to women’s religious orders, having attended their schools and supported their ministries for decades,” the philanthropist continued. “They were completely outraged that in the wake of the clergy sexual abuse crisis, the nuns were being investigated.”

Kerry Alys Robinson, executive director of the National Leadership Roundtable on Church Management, referenced meetings in Rome that she and other donors had in an Oct. 24, 2013 American Magazine article, “Women in dialogue with the Vatican.”

“In our meetings with Vatican officials we have been impassioned advocates for women religious,” wrote Robinson. “Over the decades of our collective families’ philanthropy, it is women religious who have been center stage as part of the most compelling, courageous and effective ministries globally. Promoting, celebrating and expressing gratitude for their lives, leadership and example is right and just.”

Her group proposed a Vatican day care center for the children of lay staff members.

Cardinal Rodé, in an interview with this writer in his Vatican apartment two years ago, said that the call to investigate had come from Cardinal Bernard Law, who resigned as Boston archbishop in 2002 amid the abuse crisis, and soon found redemption in Rome as pastor of a great basilica. The other prelate behind the call, said Rodé, was Archbishop William Lori of Baltimore.

In 2003, Lori approved a $21 million abuse victims settlement involving several priests. Voice of the Faithful criticized him for allowing an accused monsignor to stay in his parish until he resigned, facing 2011 sex harassment allegations from a female church worker.

That double standard in leadership – bishops stained by scandal in the abuse cases, accusing nuns of bad faith – may be at its eclipse.

Pope Francis celebrated Mass with sisters involved in the apostolic visitation before the press conference Tuesday. Nothing has yet been reported to suggest the pope took a direct role in reversing the course of the investigation.

The more contentious problem of the Congregation of the Doctrine of the Faith asserting control over the LCWR is still a work in progress. However Sister Sharon Holland, the new LCWR president, said at the press conference: “We’re moving toward resolution of that.”

"I don’t know what [Vatican officials] thought we were doing as women religious,” Sister Schenk in Cleveland said with a trace of exasperation.

“But from what Mother Mary Clare [Millea] said, in all the congregations, the vast majority have been diligent in managing finances, caring for senior sisters and working to promote vocations while attending to the normal things that sisters do, relating to prayer, spirituality and community living.”

GroundTruth religion correspondent Jason Berry is author of Render unto Rome: The Secret Life of Money in the Catholic Church.