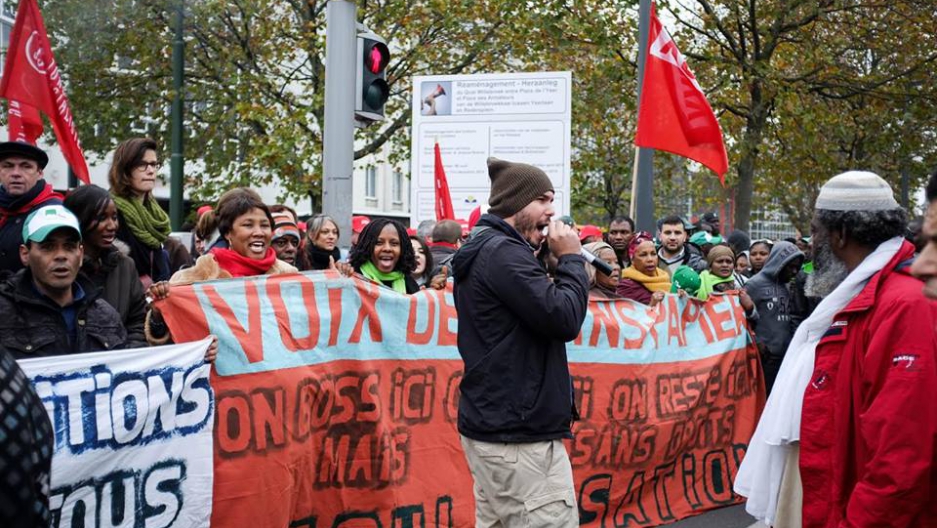 NEW YORK — To the dismay of human rights advocates, Italy announced the end of its Mediterranean search-and-rescue sea mission, Mare Nostrum, in October. The year-long initiative had saved hundreds of thousands of migrants from drowning.

Instead, the European Union will beef up its border control operation Frontex, which lacks a humanitarian mandate to search for migrant boats in trouble. The EU has simultaneously increased policing efforts against undocumented migrants in recent years, wrapping up its latest two-week policing blitz in October.

The actions are indicative of a new, harsher EU response to the flood of asylum seekers entering Europe, many fleeing worsening conflicts such as in Syria. Policing operations on the undocumented have intensified and authorities have doubled down on border control.

Rather than coordinating migrant and refugee assistance efforts across member nations, the agenda the EU has developed is more focused on keeping newcomers out by means of surveillance and force. This in turn has brought continent-wide protests against what many consider the EU’s disregard of international human rights.

The most recent policing push left Europe’s estimated 3.8 million irregular migrants in heightened fear of arrest. Dubbed Mos Maiorum after an ancient Roman concept meaning “the way of our ancestors,” the Italian-led operation involved checking, apprehending and detaining those without documents.

Officials said they intended to collect data and target smuggling networks, but critics complained the sweep reinforced racial profiling and stigmatized both undocumented and documented migrants, many already living on the margins.

“It is resorting to police and criminal approaches to the issues of migrants coming in and refugees applying for protection,” said Grace Punongbayan of the advocacy organization Migrante Europe. “And this definitely goes against the letter and spirit of many conventions on human rights.”

This policing mission was certainly not Europe’s first, but it elicited greater public protest than past initiatives because the watchdog organization Statewatch leaked an official EU communique calling member states to participate in advance, news that spread across social media and prompted an outcry. German activists created a crowdsourced map of identity checkpoints so migrants could try to avoid police hotspots.

Brahim, an undocumented Moroccan migrant, helps lead a Brussels-based grassroots collective known as Voix des sans-papiers, or “Voices of the Undocumented.” Infuriated by the Mos Maiorum operation, the group demonstrated at the Brussels train station. “We just want to be like everybody else who lives here,” Brahim said. “To have equality.”

Policing is not limited to brief operations like Mos Maiorum: For many migrants, living in fear of apprehension is the norm.

“We’ve heard many people say they were stopped and searched because they look like Muslims, like migrants, and they should not be here,” said Juliana Wahlgren of the European Network Against Racism. “This does not reduce the stigma against migrants.”

The criminalization of migrants affects both those who reside in Europe as well as those who attempt to enter, as both EU and national police forces intensify border operations.

For example, the Spanish enclave Melilla, which is nearly surrounded by Morocco, recently attracted international attention after a Spanish officer clubbed a migrant climbing the fence that separates the two territories until he fell and lost consciousness. Bulgaria stationed 1,500 police officers along the Turkish border after a huge influx of refugees fleeing war in Syria last year. The Bulgarian Ministry of the Interior estimates that in the past nine months, the containment plan prevented at least 15,000 people from crossing into Europe.

Kadri Soova, who works with the Platform for International Cooperation on Undocumented Migrants, said cases such as these — alongside concerted operations like Mos Maiorum — frame migrants as criminals in the eyes of both authorities and the public at large.

The policing crackdown and border tightening coincide with increased instability in Europe’s neighborhood and the rise of far-right ideologies throughout the continent.

In an effort to reach voters who are nervous about the economy and rising unemployment, many EU politicians are connecting domestic difficulties to the migrant influx, pushing restrictive immigration policies as a solution. The United Kingdom, for example, recently advocated capping unskilled migrant entries. Spain is considering an amendment allowing border authorities to arbitrarily push back migrants after they enter its North African enclaves, without allowing them the chance to request asylum.

But Wahlgren of the European Network against Racism called this conservative shift “a lose-lose situation in a time of economic crisis.”

“So much is invested to mobilize Frontex and police forces, when this money could be used for other kinds of policies, like social inclusion,” she said. Migration to Europe shows no signs of stopping, and despite the focus on policing, the EU clearly could do more to help.

Flavio Di Giacomo of the Rome office of the International Organization for Migration warned against inflating the border crisis: “We don’t see it as an emergency in terms of numbers; this is not an invasion,” he said. “While more than 150,000 people arriving on Italy’s border is a huge number, we are talking about a country with 60 million people, and an area of the European Union with 500 million people, so 150,000 migrants is not so many.”

Neighboring Turkey, a country of just under 75 million people, expects to take in 1.4 million refugees by the end of this year. In the United States, a region of comparable size and resources to the EU, roughly four percent of the population is undocumented compared to less than one percent in the EU. In other words the rate is more than four times higher in the US.

As political battles over how to manage immigration to Europe continue, migrants like Brahim say they’ll continue to work for rights.

He and some 50 members of his group are currently on hunger strike, aiming to obtain state papers to access the legal labor and housing markets.

“It’s not easy, but we’ll be here until the end,” he said. “I have nothing more to lose, so I will fight until I win.”

Maggy Donaldson and Kavitha Surana reported on European migration this summer as part of a two-year M.A. in Global and Joint Program Studies at New York University.

Part Three: For child migrants in France, growing up could mean losing it all