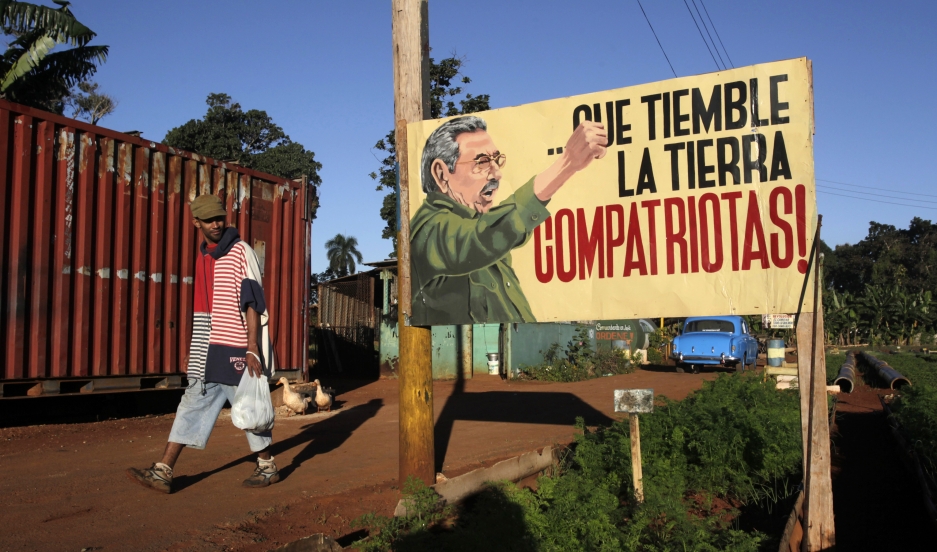 A man walks near a sign with an image of Cuban President Raul Castro in Havana December 19, 2014. Stepping out of his legendary brother's shadow, Castro has scored a diplomatic triumph and a surge in popular support with the deal that ends decades of open hostility with the United States.

Twice, my visa request fell on deaf ears at the Cuban Interests Section in Washington. But then in 2004 — no explanation — I was granted a visa to travel as a journalist to the island. The man on the ground, my fixer, who helped introduce me to a mix of Cubans, was Yuro Leyva Lopez. He's a musician and a photographer. And he's a child of the revolution. His grandfather was a revolutionary. So was his dad.

Yuro himself was so compelling; he became a subject of my reporting. And we've stayed in touch since then. Yuro is part of the generation of Cubans known as the "lost generation." The ones who came of age after the fall of the Soviet Union — and the loss of all those Russian oil for sugar subsidies. But while in Havana, Yuro gave me his alternate name for the lost generation.

"The ones that did not leave," he told me.

Yuro did end up leaving. He now lives in Madrid, Spain. It houses a large Cuban ex-pat community.

"I left this island in 2007," he says. "The waiting went too long for me. The youth and the spirit of fight and survival on the island is a little bit lost."

Yuro says he was waiting for exactly what is happening right now. He'd hoped the US and Cuban governments would realize the pointlessness of the embargo. He thinks good governments support the people. He didn't think that was happening in the two countries.

It's been a bumpy year for Yuro. He has a new child, but his partner has been ill. He has to balance work and child rearing on his own. That's a bit easier as his mother left Cuba to join him in Madrid. But when he left, he left everything. Everything he worked for vanished, including a beautiful home on the beach. I still remember swimming outside the home. It was just a fantastic place. Yuro think he will probably one day regret selling the home. "It's a house that I spent my whole life working on," he says. "It was the closest thing for me to home."

Yuro says selling it was almost like burning the last bridge to home. But he still has a link to the island, a bridge that will always be there for him and that's the Cuban culture. It doesn't leave him. He imbues his art with the culture, and his songs. It's there. And it doesn't hurt the culture is alive and well in Madrid. They talk about news from home. "In general, the feeling is a feeling of happiness," he says. "Sometimes you thought you wouldn't see this happen, you know? This game between governments, between powers, was going to be played forever. And now at least there is a sense of happiness.

I wondered if Yuro would ever head back to island. He says it's too late for many Cubans. And it’s probably too late for him. He has a family now in Spain. Still, he says a lot of Cubans are looking at the renewed relations with the US as a way to travel back to the island and start over again.