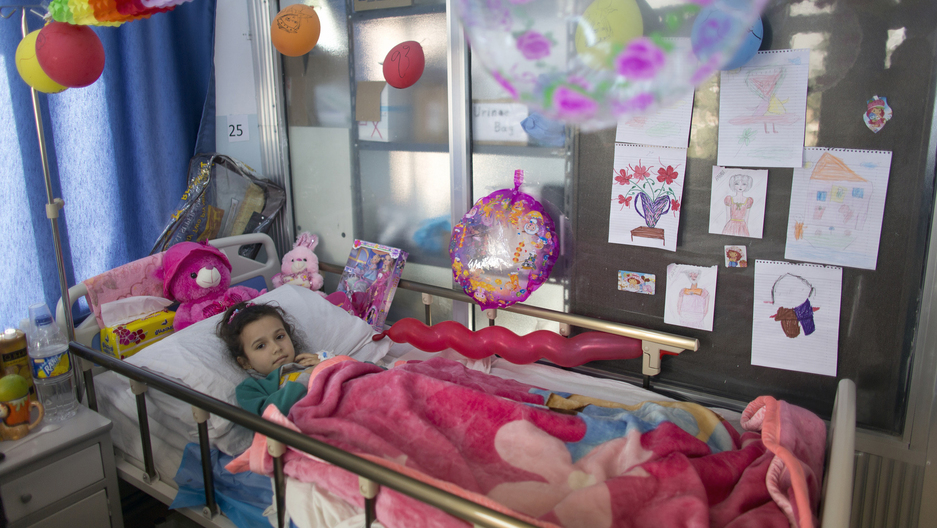 MSF staff work in Ramtha Hospital, where wounded patients from Syria's ongoing civil war are being treated. The girl photographed lost one leg from an artillery injury.

All too often, war violently intersects with the lives of average people. In Syria, sadly, those people are often children.

This summer, two best friends, we'll call them Mohammed and Omar, were exploring outside — as 9-year-olds anywhere are wont to do — in their Syrian hometown of Daraa. They stumbled upon an electronic device and began to play with it. That device turned out to be unexploded ordnance — which didn't stay unexploded for long. The two boys were critically wounded — Mohammed lost both his legs and his left hand and Omar had severe abdominal and leg injuries.

The children’s parents managed to rush them both to a hospital just across the Jordanian border in the city of Ramtha. Michelle Mays, a pediatric nurse and project coordinator working with Doctors Without Borders in Ramtha, helped treat the boys.

“Thankfully they were able to get to the hospital ... in a matter of a few hours post-injury,” she explains. “Which is not true for all patients. Sometimes, depending on where people are injured, it can take them a really long time to get to Jordan. But these two boys were lucky enough to get to us pretty quickly.”

While the Ramtha hospital works with nearby facilities when needed, the staff’s resources are usually stretched pretty thin. Luckily, when Mohammed and Omar arrived, the hospital was able to accommodate them.

“There was a lot of coordination that had to take place because we had to operate on both boys simultaneously in order to save their lives,” Mays says. “We’ve had upwards of more than 30 patients come in within a matter of a couple of hours, and it can be tough. Thankfully that night it was just those boys who needed emergency surgery, because we only have two operating rooms.”

But that’s not always the case, she continues. “Sometimes there are tough choices that we have to make about who really has the best chance to survive, or do you spend five hours trying to save a life of someone who’s probably not going to make it.”

Mays, who regularly checked in personally with Mohammed’s mother and Omar’s father, says dealing with the harsh and gruesome realities of conflicts is tough — but seeing an innocent child become a victim of that conflict is distinctly tougher.

“It’s really so tough for these parents. Not only are you living in a war zone, your kids are there, too, and are in danger as well as everybody else,” she says. “Very sadly, it’s not just the bombing and shooting between militaries, it also the civilian casualties. And that’s really, really challenging to see.”

Despite their dire circumstances, Mays says both of the boys showed tremendous strength and managed to keep their lively personalities intact.

“They’re both big troublemakers — they are 9-year-old boys,” she jokes. “Omar was a troublemaker from the moment he woke up from anesthesia, I think. The boys both love anything electronic, so the team always has to be careful to hide their cell phones and whatnot — because if you don’t, they will be gone.”

Mohammed, who became a triple-amputee after the accident, was strikingly resilient. “Mohammed had a really tough time, I think, coming back into himself. I mean, he lost both of his legs, so that was really traumatic for him, and I think the experience itself was really traumatic. But kids are really resilient. They can have a really hard time initially, but over time he really came back into himself and he’s just the sweetest kid.”

Mays recalls a particularly moving moment she shared with Mohammed just after he woke up from anesthesia. The team went in to check on him the next morning, and Mays asked how he was doing. His reply: “Alhamdulilah,” meaning, “Thanks be to God.”

It’s a bittersweet ending for the two friends, though. Now, Omar is out of the hospital and is staying at a refugee camp in Jordan. Mohammed is still waiting on his prosthetics but will share the same refugee status as his friend when he is released from the hospital. In spite of their hardships, Mays says their friendship has persevered.

“[Omar] is doing great, and is in really high spirits, though it is really hard for him to leave his best friend Mohammed, who is still undergoing a lot of treatment,” she explains. “As much as they’re traumatized and just so confused about what’s going on with them, they are so resilient.” 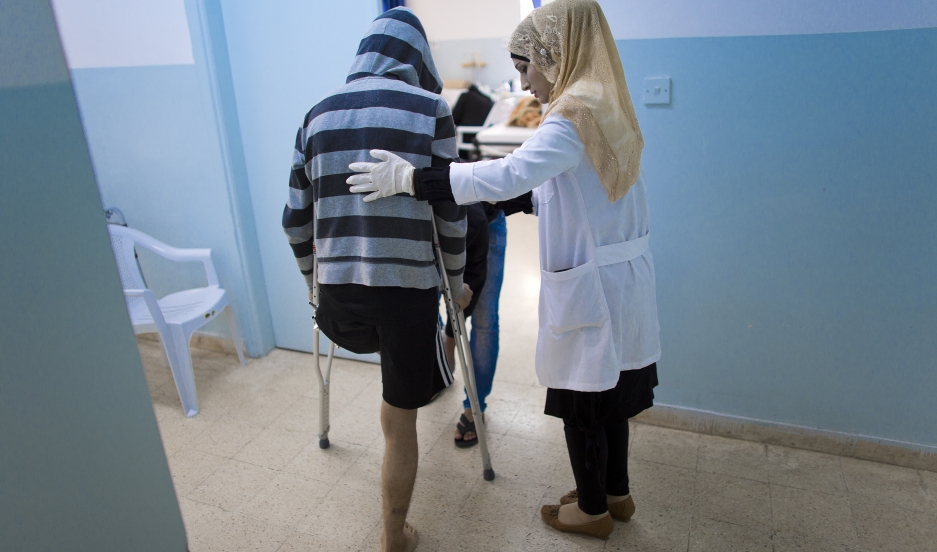 MSF staff work with Sami Abu Yusu at Ramtha hospital in Jordan, near the Syrian border. Yusu lost a leg in the conflict and is learning to walk again.