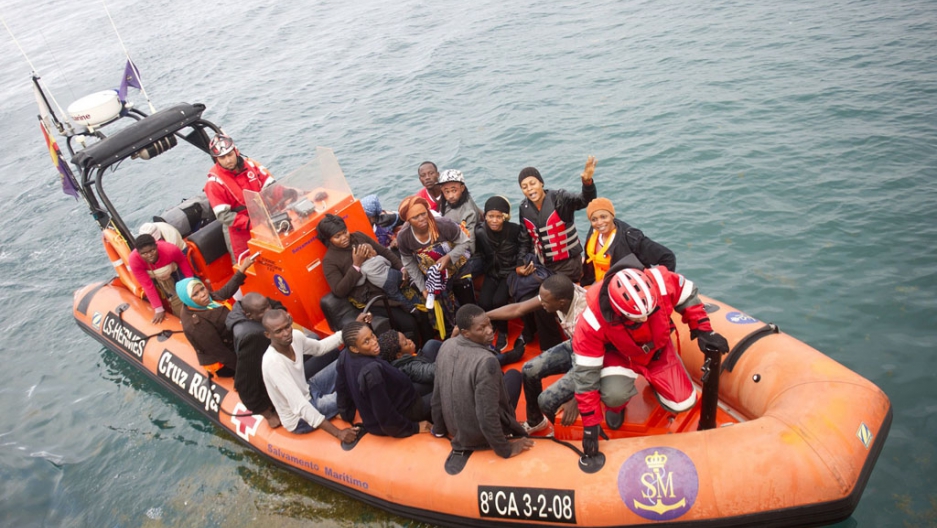 BERLIN, Germany — When Mazen Dahhan decided to flee Syria’s civil war last year, he entrusted his life and those of his wife and three children to a smuggler in Libya who promised to take them across the Mediterranean Sea to Europe.

The 37-year-old neurosurgeon hoped he and his family would find refuge in Italy. But less than 24 hours after they embarked on the journey, their fate took a harrowing turn.

Their ship came under fire off the coast of Malta from traffickers in another boat. When their vessel sank, Dahhan says, his entire family drowned.

“You can’t imagine what it was like,” he says. “I lost ten years of my life in ten seconds.”

At least 30 of Dahhan’s fellow passengers perished. More than 200 were rescued in the following days, the Guardian reported last October.

The number of migrant deaths in the Mediterranean has soared since then: More than 3,000 people have drowned attempting to cross the sea this year, according to the Geneva-based International Organization for Migration. At least 5,000 people have lost their lives while crossing seas and remote deserts or mountains across the globe, making 2014 the deadliest year on record for migrant deaths, the group says. It emphasizes that the real number could be much higher.

As the world marks International Migrants Day today, human rights groups are making urgent calls for countries to find a political solution to the global immigration crisis. The issue is particularly severe in Europe because of the number of deadly conflicts raging in nearby regions in the Middle East and Africa.

“We must address the drivers of desperation migration and act in concerted and coherent partnership,” IOM’s director William Lacy Swing said in a statement. “This is a battle we must fight together. We need more political leadership and the courage to counter the worrying rise of xenophobia.”

The tragedy that befell Dahhan’s boat, along with another shipwreck a week earlier in which more than 350 migrants from North Africa died near the Italian island of Lampedusa, prompted Italy’s then-Prime Minister Enrico Letta to announce a robust rescue mission in the Meditarranean.

The Mediterranean had “turned into a grave,” Deutsche Welle quoted him as saying.

Italy’s naval search and rescue operation, called Mare Nostrum, has saved up to 150,000 lives over the years, Amnesty International says. But last month, reeling from the task’s magnitude, the authorities announced they would hand over patrolling the Mediterranean to the European Union.

In October, Britain said it would no longer support future Mediterranean rescue missions, claiming that saving migrants only encourages more asylum seekers to risk their lives.

Even as the question of how to deal with the growing number of refugees seeking asylum in the EU has become increasingly acute, the issue has devolved into a political shouting match among member states.

Some countries are calling to attention to what they say is the disproportionate number of refugees they’re accepting.

A look at the figures indicate that some of the loudest complainers — France, Germany, Italy and the United Kingdom — aren't actually taking in a significantly larger number of asylum seekers relative to the size of their economies and populations, according to the United Nations High Commissioner for Refugees.

Experts point out that countries such as Malta and Sweden are taking on a far greater share of the burden than Germany and other countries raising the loudest outcries.

“Contrary to popular perceptions, Germany’s intake of refugees is relatively low in comparison to other EU countries,” London School of Economics professors Luc Bovens and Jane Von Rabenau wrote in a blog post. “Politicians are playing with the numbers so as to overstate how much responsibility Germany is assuming for EU asylum seekers.”

France has taken in fewer than four asylum seekers per 1,000 people of its population of 66 million.

The UK has taken in two asylum seekers per 1,000 people of its population of 64 million.

Germany has taken in around two asylum seekers per 1,000 people of its population of 83 million.

Sweden has taken in 12 asylum seekers per 1,000 people of its population of 10 million.

Concerns about the financial and social costs of absorbing refugees has pressed some European lawmakers to direct more spending to border policing and other programs designed to keep asylum seekers out of the continent, Amnesty International says.

“The measures they have been taking to keep people out are getting more severe, and financially they spend more and more money on building the fortress Europe,” says Franziska Vilmar, an Amnesty expert on refugee and migrants' rights. “This is the tendency, and there is no shift in sight.”

EU member states spent almost half of a $5.6 billion EU fund for refugees and asylum seekers between 2007 and 2013 on infrastructure and other border control measures for the Schengen area. Less than a fifth of that amount was allocated for the processing, resettlement and integration of refugees.

What the countries do seem to agree is how much money should be spent on rescue missions in the Mediterranean.

Triton, the operation run by Frontex — the EU’s border-policing organization — to fill the gap left by Mare Nostrum’s closure, has a budget of $3.8 million a month. With only a handful of permanent staff, it relies on the largesse of member states for equipment and personnel. It will limit its operations to 30 nautical miles off the coast of Lampedusa, and its primary focus will be border control.

The former Italian operation, in contrast, cost $11 million a month. The Italian navy patrolled as far as 160 nautical miles from Lampedusa to the border of Libyan waters. Although it performed other duties, its focus was search and rescue.

The disbanding of Italy’s Mare Nostrum for a weaker replacement suggests that trend is continuing despite the deaths of as many as 23,000 people trying to reach Europe since the year 2000, Amnesty International says.

Italy discontinued its operation because its neighbors refused to help foot the bill, complaining that Rome was sending asylum seekers on to other countries rather than documenting them according to a set of EU rules known as the Dublin Regulation.

Under those rules, the country that documents an asylum seeker's first entry into the EU bears responsibility for housing while the claim is evaluated — unless the person has family ties in another EU country.

Critics say that gives Italy a strong incentive not to document the people it rescues, while politicians in France, Germany and Sweden have increasingly called for a reform of the Dublin system to push asylum seekers into relatively unpopular destination countries, such as Poland and Slovakia.

As the debate continues, neither the migration policy debates nor the sea journeys' dangers appear to be deterring those fleeing ongoing sectarian violence and civil wars across various parts of the Middle East and Africa.

“I blame myself,” he say of his family's loss. “I cry every night and every day. I don’t know how I’m supposed to live again. Life has no meaning.”