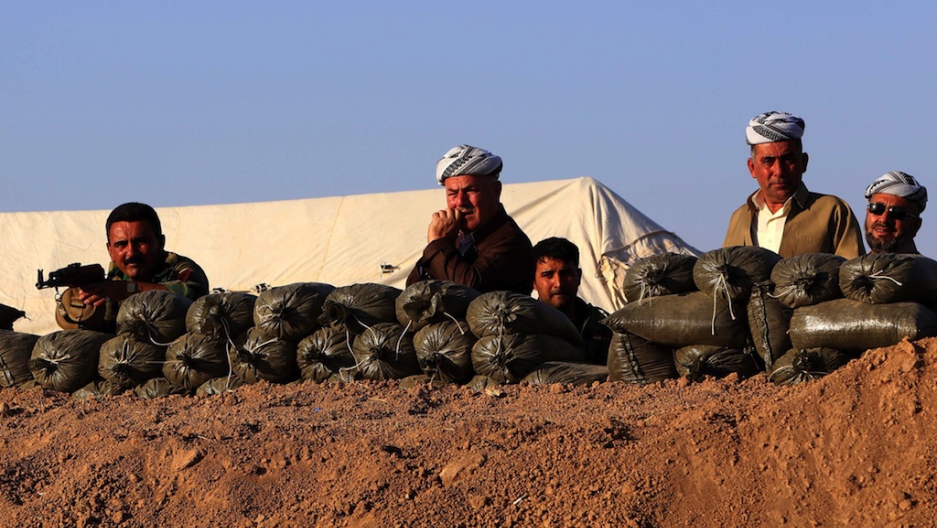 Iraqi Kurdish Peshmerga fighters take position behind sandbags on the front line 40 km west of Erbil on Aug. 14, 2014. Yazidi civilians had fled to Mount Sinjar days earlier after their town was overrun by the Islamic State.
Credit: Safin Hamed
Share

ERBIL, Iraq — Kurdish peshmerga forces claimed on Thursday to have broken a months-long siege by the Islamic State of Mount Sinjar, recapturing a number of villages in the area and creating a corridor for hundreds of Yazidi civilians who were trapped there to escape.

A large-scale offensive involving 8,000 peshmerga fighters and backed by intensive US airstrikes began on Wednesday morning, according to a statement from the office of Masrour Barzani, the semi-autonomous Kurdistan region’s intelligence chief.

The statement called the operation "the single biggest military offensive against IS and the most successful." It added that the siege was broken around 1530 GMT, and resulted in jihadist fighters fleeing towards Mosul.

More from GlobalPost: This 84-year-old woman crawled on her knees to safety to escape the Islamic State

"Peshmerga forces have reached Mount Sinjar, the siege on the mountain has been lifted," Barzani, who is also the son of the Kurdistan Regional Government’s (KRG) president, told reporters on Thursday, according to AFP.

Islamic State fighters have occupied most of Sinjar province since sweeping through the area in an offensive this August.

Thousands of Yazidis — a minority group whom IS has described as devil worshippers — fled to Mount Sinjar to escape the onslaught, during which IS fighters carried out mass killings and took hundreds of women and children as slaves.

Fears that IS fighters would massacre those civilians who managed to escape to the mountain prompted US President Barack Obama to order airstrikes against the group in early September. The US later expanded the operation against IS to the group's territory in Syria.

While some Yazidis were able to escape during the initial offensive, many have been trapped on the mountain since August, unable to find a safe passage out.

Fighters with the Syrian Kurdish People's Protection Units (YPG) and the Kurdistan Workers Party (PKK) have held positions in the mountains during that time to defend the stranded civilians. A small number have been airlifted out by helicopter, but it is thought that thousands still remain there.

A peshmerga commander told AFP on Thursday that a road had been secured that would allow those remaining on the mountain to escape.

"Tomorrow most of the people will come down from the mountain," Mohamed Kojar told AFP by phone.

As news of the offensive’s success broke, US officials highlighted the contribution of airstrikes carried out by the American-led coalition doing battle with IS.

Lt. Gen. James L. Terry, who is heading up the US campaign against IS, told reporters on Thursday that the Kurdish offensive was backed by 53 airstrikes by the coalition, according to the New York Times.