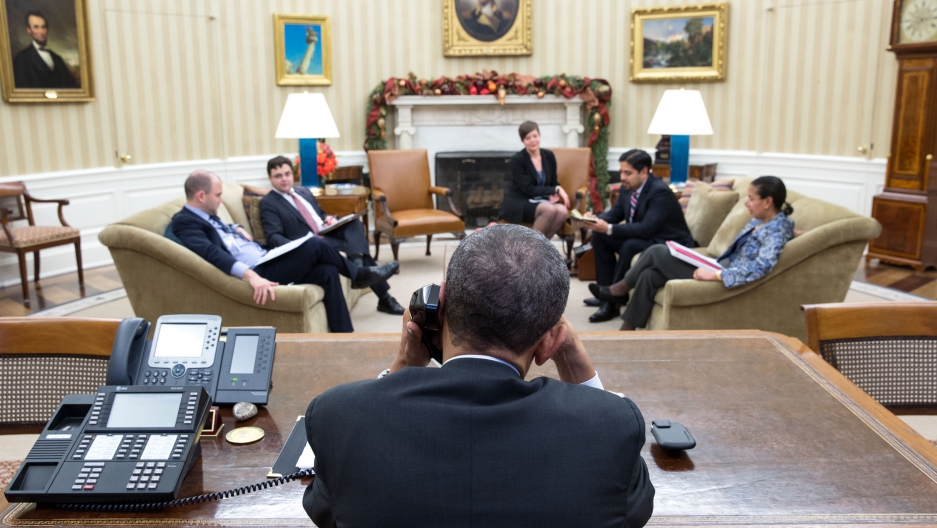 President Obama talks with Cuban President Raul Castro before the thaw in US-Cuban relations was announced on December 17, 2014.

Church bells in Havana rang out after the news of renewed ties between the US and Cuba broke on Wednesday. But in Tehran, the rapprochement between two longtime enemies inspired something else: envy.

"I saw some sarcasm, I saw some hope, I saw some envy,'' says Negar Mortazavi, an Iranian journalist based in New York. "Also I would say disappointment and negativity, that a lot of people were saying, 'Well, this happened to Cuba, but it might not happen to Iran sometime soon."

Mortazavi pointed out one Iranian's view: "If the US was willing to step down out of its ivory tower before a small nation, a small island nation, with a population of a few million, than surely you can start a new chapter with a regional powerhouse in Iran with a population of 80 million."

The US and Iran have had no formal diplomatic links since 1979, when Iran's Islamic revolution took over the country and protesters stormed the American embassy in Tehran. But many Iranians on Twitter expressed hopes that the US might soon re-establish ties with Iran.

Here are some of those tweets that we found:

#Iran should take note. Obama is clearly going to use his last 2 years to take bold, positive action. This is not the time to hesitate #Cuba

Breakthrough with Cuba. Isolating a country & demonizing it does not work & is in no one's interest. #Cuba today, #Iran tomorrow?

Sanity prevailed on #Cuba. Time for the same to happen in the #US, on #Iran. #IranTalks

The U.S. opens embassy in #cuba! Hopefully, it will do the same in #iran. #embargo and #sanctions do not work, clearly.

And Mortazavi has tweeted some thoughts from Iranians, translating them from Farsi to English:

'Havana Havana. We are coming!' Iranian economist in US

'I visited Cuba & was disappointed. Isolation only harmed its people who didn't know much about world except for state propaganda.' Hassan

On US-Cuba: 'Why do I have to be happy about the hegemony of capitalism?! It is just sad.' Iranian Artist in NY