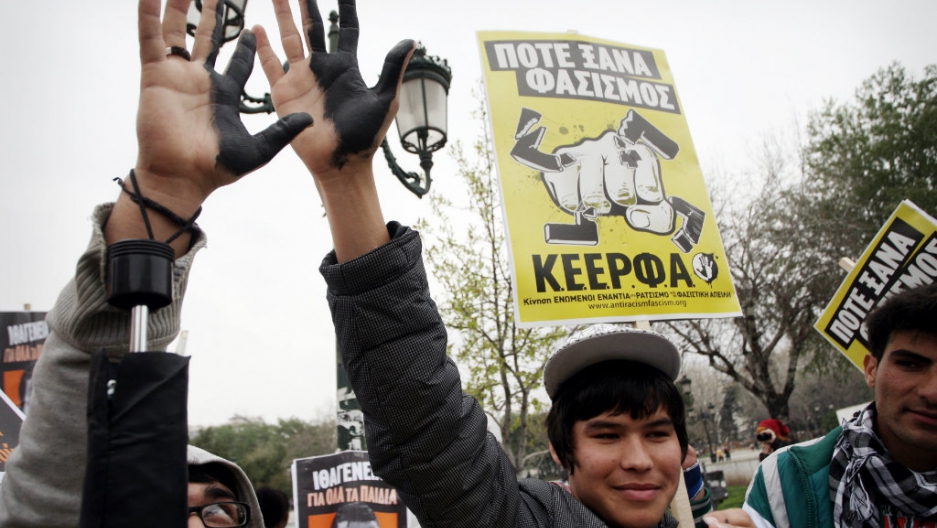 Greeks and immigrants raise their painted hands during a demonstration in the northern Greek city of Thessaloniki on March 30, 2013, as they called for Greek citizenship for migrants' children born or raised in Greece. The Greek Council of State deemed unconstitutional a law passed almost three years ago which allowed second-generation migrants to apply for citizenship and to stand in local elections.
Credit: SAKIS MITROLIDIS
Share

ATHENS, Greece — Nikos Odubitan’s friends see him as the quintessential Greek, and not just because he has one of the most common Greek first names.

He gestures like a Greek and argues like a Greek. He uses both the slang of his generation and obscure words of ancient origin. Weaving through Athens traffic on his motorbike, he greets local business owners and the odd classmate with an informal “ελα, ρε!” which means something like, “Hey, there.”

But Odubitan is not a Greek cien and until Nov. 18, when the coalition government introduced a new bill that would change citizenship requirements, had few prospects of becoming one. Although he was born in Athens in 1981, his parents are Nigerian. As a result, he, like an estimated 200,000 others with foreign-born parents, has been effectively disqualified from citizenship. That means he can’t vote or work and travel freely within the European Union, and if he doesn’t renew his visa on time, he becomes undocumented.

At least Nikos has a Nigerian passport; those who don’t have citizenship from their parents’ country of origin face an even more serious problem. An unknown number of Greek-born children of immigrants are stateless. NBA player Giannis Adetokounbo was the most famous of them, before the prime minister awarded him citizenship at the age of 18.

Now an estimated 50,000 more adults who completed their schooling in Greece can potentially join Adetokounbo as Greek citizens, if the new bill becomes law.

Citizenship laws vary from country to country in the European Union, with over half the member states offering citizenship at birth, albeit with conditions. Many governments are now rethinking citizenship codes to reflect their countries’ growing diversity. Greece’s policies, however, are currently among the most restrictive.

The proposed legislation’s emphasis on education is a bit of an anomaly in the EU, where the spectrum ranges from “citizenship by blood-right” to “citizenship by birth” on a given country’s soil. It may be Greece’s answer to the question “Who is a Greek?” or rather, “What makes a Greek?”

Odubitan has been looking for a way to be included in the answer to that question for some time. The issue “of not belonging anywhere, not being recognized” prompted him eight years ago to found an advocacy group called Generation 2.0. Its mission is to secure citizenship rights for Greece’s second-generation permanent residents. The group sees the proposed legislation as a positive step.

Since mid-October, Generation 2.0 has been featured on numerous Greek media outlets (see Athens Voice, Greka, Andro, and Lifo) and in early November, sprung to the forefront of national consciousness with a one-minute television spot. Soon afterwards, the group collected their 10,000th signature on a petition asking the government for “access to citizenship for all children born and/or raised in Greece.”

Young Greeks are the campaign’s target demographic. “Many people who knew us personally were not aware” of their struggles, Odubitan said, or that some of his peers were “in danger of being deported to a country that they have never known.” The group’s surge in popularity suggests that many Greeks are sympathetic to its cause, challenging the perception of a xenophobic Europe.

As law professor Dimitris Christopoulos explained, “If you ask a Greek, ‘Would you like a second generation to obtain citizenship,’ 60 percent would say yes. They understand that these kids have a lawful reason to belong.”

Now there’s a chance that the law will come to reflect this understanding. Angelos Syrigos, Greece’s Secretary General for Population and Social Cohesion, said the bill’s proposed path to citizenship would include adults who have completed nine years of Greek primary and middle school, six years of Greek middle school and high school, or Greek high school plus a two- to four-year Greek college degree.

It also concords with Greece’s constitution, Syrigos said, unlike its ill-fated predecessor, the Ragousi Act, which was declared unconstitutional in 2013.

While the extreme right-wing party Golden Dawn celebrated the ruling that overturned the law as “a great victory” against an “anti-Greek” law, the EU’s Democracy Observatory on Citizenship characterized it as a nationalist “ideological-political manifesto rather than a judicial text.”

In the three years the law was in effect, it made citizens of just over 6,000 children of immigrants who either had parents who had been legal residents in the country for five years or more, or who had a Greek education.

If the bill passes, which Syrigos said may happen by the end of 2014, Nikos and his peers could see the end of their “legal limbo,” as Christopoulos put it. But as of now, a date has not been set to vote on the bill. The likely scenario of going into snap elections at the end of January may have bumped the bill down the agenda. And if a new party is voted into power, they very well might chose to rewrite the citizenship law yet again rather than approve the previous government’s legislation.

Under the status quo, the only way for children of immigrants to gain citizenship is through naturalization, a process he called “the most demanding administrative procedure within the Greek legal order.” And that’s in a country notorious for its burdensome bureaucracy.

Meanwhile, these days Odubitan is Greek in one more stereotypical way.

In early 2014 he took on the role of a public servant, sitting behind the desk at Athens’ Immigration Services, processing visa applications. As a non-citizen, it’s not a job he can legally hold, so he volunteers. During the workday, he advises over a hundred applicants.

The agency’s director, Ilias Chronopoulos, said Generation 2.0 had helped Immigration Services to streamline their process significantly. “Now, there are a few people just walking around, 20, 40. Many months ago, it was about 500, 600,” he said in July. Generation 2.0 “took a burden from our shoulders.”

As for the idea of non-Greeks training public servants, he found it ironic. “Can you imagine? This is very strange for a Greek administration.”

Generation 2.0 members don’t want their presence to be strange. “We are seen not as Greek youth with a migrant background but as foreigners who do not belong to Greek society as a whole,” the group’s website says.

And that’s why Odubitan’s battle is about integration as well as policy.

Sally Lynn Edmonds reported on European migration this summer as part of a two-year M.A. in Global and Joint Program Studies at New York University.