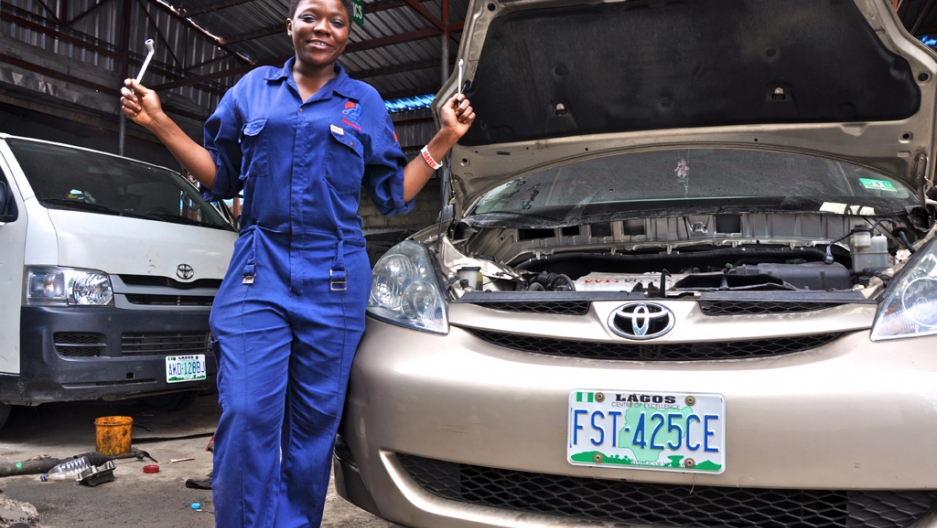 Last year 24-year-old Rebecca Egoche joined Sandra’s two-year program, looking for a way out of the dark pit of prostitution and street life she had been spiraling down since the age of 14.
Credit: Lauren Bohn/The GroundTruth Project
Share

Editor’s note: This story is part of a Special Report on the global youth unemployment crisis, “Generation TBD.” It's the result of a GroundTruth reporting fellowship featuring 21 correspondents reporting in 11 countries, part of a year-long effort that brings together media, technology, education and humanitarian partners for an authoritative exploration of the problem and possible solutions. Fellows Chika Oduah and Lauren Bohn traveled across Nigeria to produce a five-part series. This is part four.

LAGOS, Nigeria — Somewhere between hitting rock bottom and turning her life around, 24-year-old Rebecca Egoche turned on the television set in her one-room apartment in Lagos and saw the light.

“I just saw this woman talking about her business with all this strength,” she recalls. “She was her own person. And I knew I wanted to be just like her.”

That woman was 42-year-old Sandra Aguebor-Ekperouh, the founder and CEO of Nigeria’s Lady Mechanic Initiative, an NGO that provides training and employment for young women. Since 2004, Sandra has trained around 700 female mechanics.

“We need to help as many young Nigerians as we can,” says Sandra, sitting in her bustling garage on the edge of the Lagos peninsula. “They are Nigeria’s future.”

Last year Rebecca joined Sandra’s two-year program, looking for a way out of the dark pit of prostitution and street life she had been spiraling down since the age of 14.

In a country with high unemployment and more than 60 percent of people living below the poverty line, prostitution and drugs are illusory tickets out of poverty for many of Nigeria’s youth.

“It’s all about the hustle in Lagos,” she says. “I just wanted a beginning.”

Few people know that hustle better than Sandra. She says she is Nigeria’s first female mechanic and wears the title like a hard-earned medal.

At 14, she fell in love with cars (specifically “big, eight-cylinder engines”) and would take her mechanic’s overalls to school in a bag, quickly changing into them after class, arousing giggles and jeers from her dainty classmates.

Her passion for cars was a huge taboo, especially among her parents who urged her to pursue another field. She ignored them, fortified by recurring dreams from God, she says, to continue and eventually teach other women the trade. She started a small workshop from her car, helping women on the side of the road.

She eventually opened her own garage, and in 2003, she began “teaching other women how to fish.”

Initially, nobody wanted to support the initiative, she says. It wasn’t until the United States government funded her in 2004 and “treated [her] like a queen” during her visit to America that Nigerians started to dole out praise.

Since then, Sandra says even the first lady of Nigeria has thrown her support behind the initiative.

Still, Sandra says she’s not immune to Nigeria’s notoriously burdensome bureaucracy. Last year, she says the Lagos State government inexplicably forced her to move her garage to a new location.

“I’m not one of those people who thinks the government needs to do everything for them,” she explains. “Obviously I did it all myself. I just need infrastructure, some action….this is a country that always makes you wonder if you are wanted or not.”

With support from several sponsors, Sandra is soon expanding Lady Mechanics to northern Nigeria. While the north is religiously and culturally conservative, she says females there are already, if not especially, interested: women in the north want female drivers who can also fix their cars. She’s also been invited to scale the program in Liberia and Benin Republic.

For young, once wayward women like Rebecca, Lady Mechanics is more than a garage — it’s a family, a home she’s never had.

A self-proclaimed tomboy who always wanted to play with airplanes instead of dolls, Rebecca says she’s finally found herself. Even when not working at the garage, she says she wears her overalls around just to gauge reactions.

“This is a man’s job in Nigeria, so I like surprising them,” she says, almost blushing. “I like making them say, ‘Wow.’”

With Sandra’s guidance, Rebecca hopes to start an outreach street campaign that targets at-risk females and connects them with advancement opportunities like Lady Mechanics.

Since her days on the street, she says she changed her phone number, erased all her former contacts, and has promised herself a fresh start. The only remnants from her past are tattoos which spiral around her arms and back – reminders of what she came from, and how far she has come.

When she graduates, she plans to get her biggest tattoo yet: a car engine sketched on her back.

She’s wasted so many years, she says, but tries not to wallow in regret.

“You can’t turn back the hands of time,” she sighs, taking a deep breath before preparing to remove a car-engine, her most difficult task yet. “You can’t look back.”