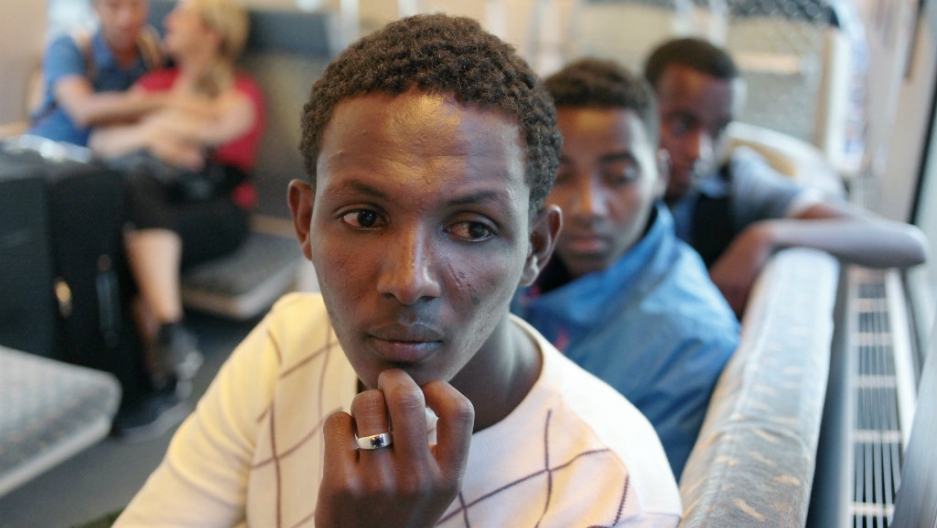 Three young boys from Eritrea cross the border between Italy and France on board a regional train, on Aug. 6, 2014, near Nice, southeastern France. Immigrant minors have the right to education and foster homes in France, but transitioning to adulthood is a challenge for young migrants.
Credit: JEAN CHRISTOPHE MAGNENET
Share

PARIS — In his other life, Juman Ahmed witnessed his father’s brutal murder in an attack that left his mother beaten and put him in the hospital for 14 months. He flew alone from Bangladesh to France on April 3, 2012, just before his 17th birthday.

When he first arrived, he was angry, confused about why he was plucked from his home and sent to a strange new country where he knew no one. A call to his mother made things clear: “I saw my husband die in front of me,” she said. She didn’t want her son to be next.

But at the age of 18, those rights dry up. As legal adults, former unaccompanied child migrants are no longer entitled to housing, education or food, and need residency visas to continue legally living in France. So Ahmed, now 19, has found himself embroiled in a new struggle. After two years living in Paris, his adopted home, he has to find a way to stay.

For child migrants in the foster care system before the age of 16, adulthood means eligibility for residency visas without strings. But the 59 percent of child migrants who entered the foster care system at 16 or 17, like Ahmed, can only apply for residency visas tied to employment, which are only achievable after training. However, mandatory schooling stops at age 16 in France, so those who are older when they arrive can have a hard time accessing schools and training programs – making it virtually impossible to receive visas when they reach adulthood.

Being undocumented can make it difficult for former child migrants to achieve dreams of stable jobs and homes, with money to support parents and communities in their native countries. Many activists also lament how France’s formerly formidable child protection system has eroded.

“We have the feeling we do the opposite of what we believe,” said Jean-Pierre Rosenczveig, a children’s rights activist and retired judge.

France does still have a transitional category: the young adult contract. It allows for French or foreign young adults who have aged out of the foster care system to continue receiving housing, food and transportation while they finish studies or training, until the age of 21.

But France is in a long-running economic crisis, and local governments have felt pinched. Départements are responsible for the foster care system and young adult contract. Some counties have pushed against the costs of caring for child migrants and the adults they become.

One, Loiret, about an hour and a half south of Paris by car, did away altogether with the young adult contract earlier this year. Instead, the county gives young adults 450 [about $560] euros a month, and 750 euros [about $934] for young adults with disabilities. Eric Doligé, the county’s senator, said in an interview that Loiret would also provide 50 euros for rental assistance – far from the hundreds of euros it costs to rent an apartment in the area.

Dolige said the county was simply reacting to an irresponsible central government. Along with other senators, he sponsored a bill assigning the care of unaccompanied child migrants to Paris.

“We said, ‘At the age of 18, either the state sends them to their countries or gives them a residency visa,’” Doligé said. “It’s one or the other.” The bill failed.

But young people are caught in the political battle, said Tumata Lemaire from the Committee of Young Adults, a non-profit founded by social workers in January. In June, 160 youths who, like Ahmed, were 18 to 21 years old, were ousted from Loiret’s housing centers. Lemaire said the policy shift reflected the county’s efforts to sideline unaccompanied child migrants, who are shuffled into hotels with limited adult supervision rather than into children’s homes with native French children.

The central French government has given these young adults emergency housing, but doesn’t provide food, transportation or education. Some local organizations have stepped in to provide warm clothing, wash clothes or serve meals. But Lemaire said the young adults often need to survive on a single meal a day, and must wait over a year to hear whether they’ve been approved for residency visas.

As for Ahmed, he had a court date in September, hoping to get a new residency visa. But there have been some unexpected administrative hurdles. Over the summer, he’d seemed hopeful; in November, more resigned.

“It’s always a difficult situation when you’re not regularized,” he’d said back in June.

Makini Brice reported on European migration this summer as part of a two-year M.A. in Global and Joint Program Studies at New York University.