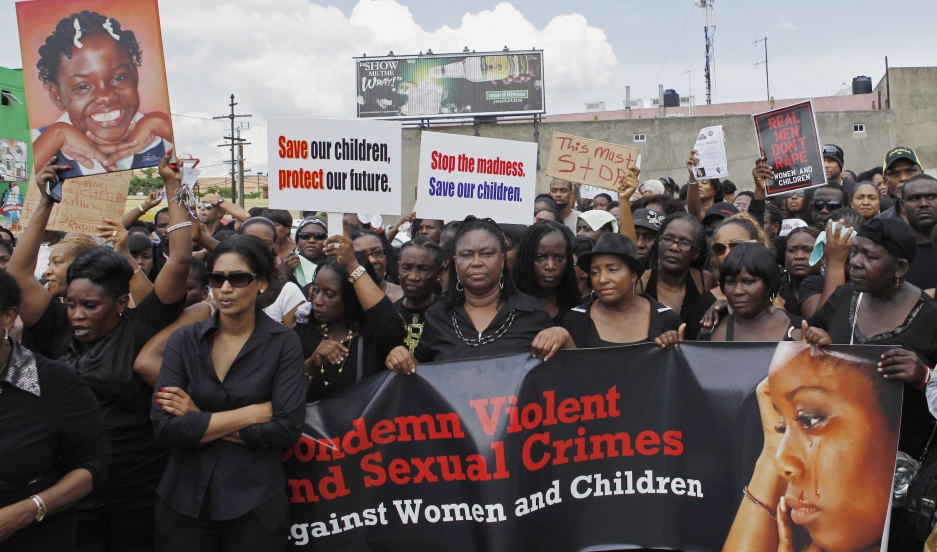 Jamaicans take part in a demonstration against the rape of three children and two women in Kingston in 2012.

The Caribbean's potentially problematic attitudes and laws concerning rape have been on display again in recent weeks.

Trinidad and Tobago's attorney general set himself up for criticism in early December when, during a speech to parliament, he warned women that avoiding date-rape drugs during the Christmas and Carnival season was about "knowing that you have a personal responsibility to protect yourself from yourself."

He presumably intended to encourage women to be vigilant, but putting the onus of responsibility on the potential victims, rather than the perpetrators, left a sour taste with many citizens.

Meanwhile, in Barbados, the Men’s Education Support Association actively lobbied for legislation in which fines would be imposed on women who make false accusations of sexual assault. According to the head of the organization, school girls regularly “tear off their clothes” and blame men for what, apparently inevitably, happens next.

The blog “Code Red,” which regularly examines regional feminist issues, was not impressed with this reasoning:

In the Caribbean, a girl who is raped at age 12 can expect to see her case come to court when she is 20, that is, if the social stigma, family and community pressure have not already forced her and her family to discontinue the case. [...]

To argue that legislation should deter women and girls from reporting crimes against them is not in men’s interest. It is in the interest of rapists.

We are left with empty advice. Rapists’ interests confused as men’s interests. A relentless culture of misogyny that is literally costing us our lives.

Unfortunately, the misogyny cited above is pervasive throughout the Caribbean. Just last month, a Jamaican parliamentarian was criticised on social media for a flippant quip about rape during a debate about a proposed flex-work bill. When a female senator made the point that women leaving work after dark could be at higher risk for sexual assault, Foreign Affairs Minister AJ Nicholson saw fit to make a joke.

The laws are also skewed against women when it comes to sexual assault. Some groups are trying to do what they can to push back. Earlier in the year, a Guyana-based human rights NGO promoted an online petition to get the marital rape laws changed:

A few months later, another Twitter user drew attention to the rape of children in state institutions and the response of one politician who said the “girls are no angels” — a typical “blame the victim” reaction:

Code Red blog cites research from the United Kingdom that indicates as many as two-thirds of rape allegations are dismissed without going to trial, thanks to a host of common “criteria” like claims of disability, mental illness, being in a relationship with the attacker, consuming drugs or alcohol before the attack and so on.

Trends in the Caribbean are no better. Code Red says the region's “rates of investigation, trial and conviction in cases of rape and sexual assault are extremely low.” In Guyana, where there are on average 140 reported cases of rape, “in the years 2012 and 2013, only 22 cases had enough evidence to go to court and none resulted in a conviction, even with the Sexual Offenses Act in 2012.” That works out to an average conviction rate of 1.4 percent:

Popular perceptions could be changing, however. Judging from this letter to the editor, some Guyanese women are no longer prepared to accept the status quo:

We are tired of paper rights. We are tired of being abused, violated and not being able to get justice. [...] We are tired of being ignored as our lives and the lives of our families grow more and more dangerous from all forms of violence including sexual violence. We are most of all tired of the hypocrisy, deception, lies, corruption, ignorance and ‘eye pass’. We are sick and tired of the wasteful and empty consultations and empty promises. We know the truth, and the truth is: in this dear land of Guyana, women and children pass for grass.

Well no more! We are not prepared to accept that there is no money for comprehensively addressing the scourge of sexual violence.

Guyanese activists are demanding urgent action to address the threats to women, including the dismissal of the attorney general and chief justice, for their alleged poor judgement in matters relating to sexual offenses. Activists are also calling for the establishment of properly funded institutions within the justice system “armed with progressive human rights-based policies to support and secure justice for victims of sexual violence.”

This story by Flora Thomas was originally published by our partners Global Voices Online, a community of bloggers from around the world.