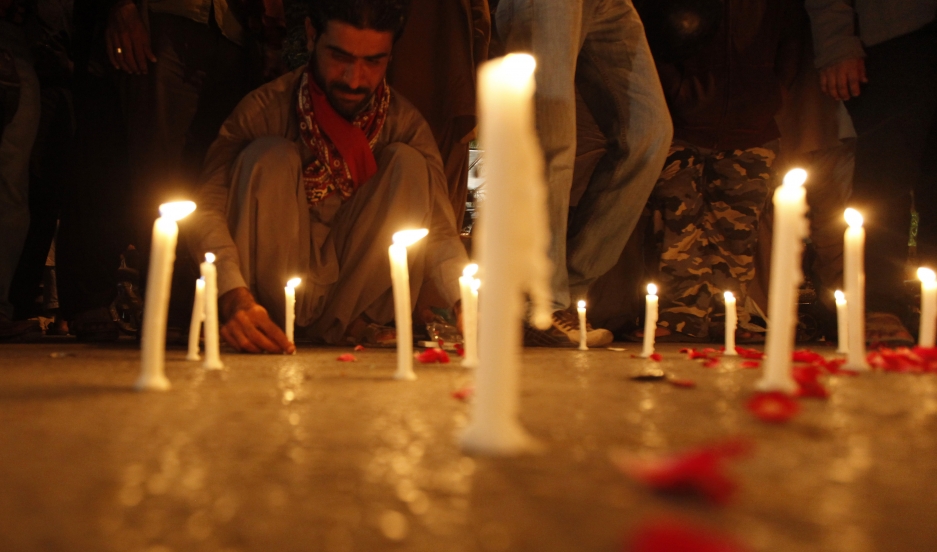 A man lights candles to mourn the victims from a Taliban attack on the Army Public School in Peshawar on December 16, 2014.

There's something about the attack on a school in Pakistan this morning that stung many of us particularly hard. Perhaps it's that it involved scores of children dying in a violent assault. It's every parent's nightmare, anywhere.

The number of dead and wounded has grown well past 100 — the exact number is still not known precisely. But we already know this was one of the deadliest attacks ever carried out by the Pakistani Taliban, who's claiming responsibility for the assault.

Many parents in Peshawar are still wondering if their children are okay. But there's one good story — if you can call it that. The story of a girl who was at the school at the time of the attack, and survived. The story comes from Shireen Khalid Wadud, a friend of the girl's family. The BBC believes the story to be accurate.

The Taliban rushed into the boys' building of the school. The girls' building is right next door. The girl heard the chaos and shooting and went to see what was going on. She wanted to get her brother and herself out of the school.

But she couldn’t find her brother. Instead, she found herself in the center of everything. The Taliban shot at her. “But she was lucky enough that she escaped that shot,” Wadud says. “She pretended to be dead.”

The girl played dead for several minutes. When she heard the gunman move to another classroom, she escaped through the back door of the building.

The girl’s mother waited outside while the daughter made her escape, talking with Madud. Madud says the woman didn’t say much, mostly just sobbing The mother later took her daughter to the hospital. The girl sustained a leg injury and has a hard time communicating. “The girl won’t talk to anyone except her mother,” Madud adds. “And she’s in a traumatic shock.”

Wadud thinks there is a simple reason for the militants targeting the school: Education undermines extremism. “Over time, schools are a more effective weapon against extremists," Wadud says. "This is the only reason I can come up with. I mean, you target schools, you create a panic among students and this is how more and more people turn toward extremism.”

Shortly after Tuesday's attack, a Pakistani Taliban representative telephoned the BBC in Peshawar and claimed responsibility for the massacre. Aamer Ahmed Khan, the BBC Urdu editor in Islamabad, said one of his colleagues took the call.

"We were absolutely stunned by the swiftness of their claim," Khan says, adding that the attackers told the BBC they had gone to the school "to take revenge for the military operation going on in the Pakistani tribal belt."

The Pakistani armed forces launched an operation against the Taliban last June after the collapse of peace talks. The campaign targets an array of different militant groups in North and South Waziristan.

"The military said it would go against everyone" in the region, Khans says. "The brutality of the attack indicated the anger and the frustration felt by some of these militant groups — in particular the Pakistani Taliban who in the past may have had a reason to believe that they have sympathizers, if not allies, in the Pakistani army."

Pakistan's military runs 128 schools across the country, primarily for the children of army officers.

"The Taliban were intending to hit the army where it hurts the most and they seem to have succeeded at a spectacular scale," Khan says.

Pakistan remains a critical ally of the White House, even though it doesn't always behave like a friend to Washington. Since 9/11, the US has sent Pakistan close to $28 billion in aid. Pakistan's military allows the US to carry out drone strikes in North and South Waziristan. This year, Pakistan army chief Raheel Sharif gave in to a long-standing US demand to launch a major military push in the tribal areas.

"It basically boils down to a battle of survival," Khan says. "Now that the Taliban feel that the Pakistani army may have made up its mind to go after them lock, stock and barrel, I think [the Pakistani Taliban] are trying to hit back in whatever way they can."